This Week's Baseball Insanity Is the Perfect Scandal for Our Age

Yuli Gurriel #10 of the Houston Astros celebrates with teammate Jose Altuve #27 after scoring off of a double hit by Brian McCann #16 against Tommy Kahnle #48 of the New York Yankees during the fifth inning in Game Seven of the American League Championship Series at Minute Maid Park on October 21, 2017 in Houston, Texas.
Getty Images—2017 Getty Images
By Sean Gregory

So there are football games this weekend?

Yes, you can be forgiven if the NFL’s conference championship games on Sunday have suddenly slipped your mind. Somehow, talk of baseball trash cans and buzzers and burner accounts have knocked football off the front page on the eve of the second-most important day for America’s most popular sport.

Baseball, America’s slog of a national pastime, has been locked in a years-long battle to win the hearts of digitally distracted youth. Well, the game now has everyone’s attention, in the most bonkers way imaginable.

Baseball commissioner Rob Manfred announced Monday that he was fining the Houston Astros $5 million, swiping their first and second round draft choices in 2020 and 2021, and suspending general manager Jeff Luhnow and manager A.J. Hinch for the 2020 season. The Astros, it was revealed, employed an electronic espionage scheme to steal signs from opposing teams during the 2017 and 2018 seasons. Manfred’s report indicated that the Astros cheated during the 2017 postseason, instantly staining their World Series title that year.

Here’s how the technique worked: A video monitor was installed near Houston’s dugout. One or more players would decode the opposing catcher’s signals and bang on a trash can. A bang or two indicated an off-speed pitch. No bangs meant a fastball. So right before a pitch was thrown, the batter had an inkling of what was coming — an unnatural advantage won through illicit spying.

The fallout was seismic. Houston instantly fired Luhnow and Hinch, who were once universally lauded for using advanced analytics to reverse the fortunes of the Astros, once one of baseball’s most awful teams. Hinch, according to Manfred’s report, seemed torn about the scheme: on two occasions he damaged the video monitor in frustration, but ultimately didn’t utilize his power to stop the cheating. So he paid the price. On Tuesday night, the Boston Red Sox essentially fired manager Alex Cora, the bench coach of the 2017 Astros who was named as one of the chief architects of Houston’s scheme. Cora took over the Boston Red Sox as manager in the 2018 and won a World Series right away; MLB is also investigating Boston for shady surveillance.

The trash can apocalypse wouldn’t end there. On Thursday, the New York Mets and new manager Carlos Beltran, the only player on the 2017 Astros named as an active participant in the scheme, agreed to mutually part ways. Like Cora, Beltran was in essence fired. “I couldn’t let myself be a distraction for the team,” Beltran said in a statement. New York had no choice but to dump him. That 2017 Astros team is so tainted that no member of the championship squad could possibly lead another franchise, at least in the near future.

Then things got even weirder somehow. A Twitter account allegedly belonging to Carlos Beltran’s niece tweeted, “I’m told to stay quiet but sorry Tio [uncle] … Jose Altuve and [Alex] Bregman wore devices that buzzed on inside right shoulder from hallway video guy. Let’s get it all out right now.” Beltran’s family denied that the account belonged to any family member. The son of former MLB All-Star Gary Sheffield added his two cents, naturally. “Carlos Beltran’s niece ain’t his niece you hooligans,” he wrote on Twitter. “That’s a player.”

So throw a burner account whodunit into this stew. The buzzer allegations summoned the Twitter detective squad, who found all manner of “evidence.” They examined Altuve’s ALCS-clinching home run against the New York Yankees back in October: as he approached home plate, he implored his teammates not to tug on his shirt. He must not have wanted the buzzers exposed, right? A Twitter user named @UnhingedYankees read Altuve’s lips as he approached the plate. “I’ve got a piece on, no!” he seemed to be saying, according to @UnhingedYankees; this actually seemed plausible. (Though even @UnhingedYankeees acknowledged Altuve’s lips may have been saying “La camisa, no!” … “The shirt, no!”)

Cincinnati Reds pitcher Trevor Bauer added fuel to the fire when he tweeted that he heard the buzzer accusations “from multiple parties too, for what it’s worth.” Wait, is that Houston outfielder Josh Reddick wearing a wire, or draped in confetti, after a postgame interview? (Reddick says confetti; probably confetti). Altuve denied ever wearing a buzzer, and MLB said it found no evidence that the Astros were wearing electronic devices.

Son of former MLB player and ex-Seattle Mariners third base coach Scott Brosius, what say you? On social media, David Brosius said Houston’s cheating was common knowledge, that MLB turned a blind eye to it, and he then made a wild claim that Mike Trout, baseball’s best player, takes performance enhancing drugs through a “thyroid condition” loophole. David later walked back his words. “The example I used of Mike Trout does not stem from information from my Dad or sources within the MLB and has no evidence behind it,” he wrote on Instagram. “I would like to sincerely apologize to him and his family for the unfair statement I made and the negative fallout it has had on them.”

Baseball went to a pretty strange place. The claims about buzzers and other violations may prove fruitless and irresponsible. But it’s hard to deny they were riveting. Baseball’s has birthed the perfect scandal for our age. It all started with tech invading one’s privacy: in this case, that of the pitcher and catcher. The drama played out on social media, with crowdsourced detective work — faulty and all — and rabid reactions to flawed hot takes. (ESPN analyst and New York Mets advisor Jessica Mendoza called out the whistleblower in this cheating scandal, former Astros pitcher Mike Fiers, for going public. She was roundly criticized for doing so). Young people — Sheffield’s son! Brosius’ son! The “niece”! — were all too engaged with baseball.

We’re not minimizing the potential damage of Houston’s cheating scandal. The game’s integrity is under review, and the legitimacy of championships is being questioned, for good reason. If MLB determines that another World Series winner, the 2018 Boston Red Sox, also cheated, this affair grows even more serious. Diehard fans of the Los Angeles Dodgers, who lost the 2017 World Series to Houston — documented cheaters — and the 2018 World Series to the under-investigation Boston Red Sox, likely aren’t laughing. Heck, even New York Yankees fans, who lost the 2017 and 2019 American League championship series to Houston, deserve some sympathy.

But just weeks from the Super Bowl, baseball’s got some wacky sizzle. So forgive Manfred if he’s smiling, even just a tad. 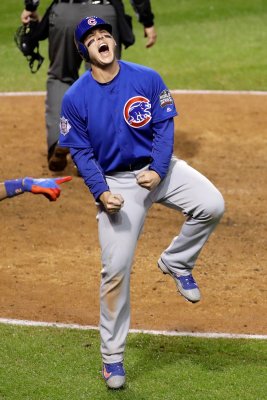 My Top Sports Moment of the Decade: The Chicago Cubs Win the World Series
Next Up: Editor's Pick