Derek Fisher of the Houston Astros celebrates with Brian McCann after scoring the winning run during the tenth inning against the Los Angeles Dodgers in game five of the 2017 World Series in Houston, Texas on October 30, 2017.
Ezra Shaw—Getty Images
By Sean Gregory

During the 2016 World Series the Chicago Cubs, and their fans who had suffered heartbreak for more than a century, charmed the country. Unless you were a fan of their American League opponent, the Cleveland Indians, odds are you pulled for the Cubbies last year. The Series had a clear theme: Go Cubs Go! And Chicago delivered.

The winner is less crucial in this year’s Fall Classic, which the Houston Astros leads 3-2 over the Los Angeles Dodgers entering Tuesday’s Game 6 in L.A. (though Astros and Dodgers fans will think differently). But an even more compelling theme has emerged: unprecedented drama, unpredictable zaniness. Though some of the World Series hubbub isn’t so alluring — more on that below — if you love baseball, or just surprising storylines in general, you can’t help but hope the weirdest World Series in memory continues to throw curveballs.

Here are five reasons that the 2017 World Series won’t be one we soon forget:

The Fall Classic has seen an historic October power surge. Through just five games, the Astros and Dodgers have combined to smack 22 home runs, which already breaks the prior World Series record, 21, set in 2002. That series, between the San Francisco Giants and Anaheim Angels, went a full seven games. If this series goes the distance, the Dodgers and Astros may hit more than 30 homers. Fourteen different players have hit homers during the World Series, another record.

Sunday night’s classic, a 13-12 Houston victory, clocked in at 5 hours and 17 minutes, making it the second longest game in World Series history. The game ended at 1:38 am Eastern Time; fans who fell asleep regretted it. Houston overcame 4-0, 7-4, and 8-7 deficits, and the Astros tied the game on three different occasions with home runs: a three-run bomb one by Yuli Gurriel in the fourth inning, another three-run shot the very next inning, from Jose Altuve, the new Mr. October (even the old Mr. October says he’s the best player in baseball), and then a solo blast to left from George Springer in the seventh. The Dodgers trailed 12-9 entering the ninth and rallied for two runs, courtesy of a Yasiel Puig home run, but were still down to their last strike when Chris Taylor punched a single up the middle to score the tying run from third and send the game to extra innings. The instant classic came to a delirious end in the bottom of the 10th; with two out, Houston third baseman Alex Bergman hit a single to left. Pinch runner Derek Fisher, who was on second base, rounded third and sprinted home. The throw: not in time. Minute Maid Park erupted. Houston’s Carlos Correa was downright giddy.

What’s more, two of the the best pitchers in baseball — Cy Young award winners Clayton Kershaw and Dallas Keuchel — were the starters for the highest scoring World Series game in 20 years. Good luck trying to figure this series out.

Amazingly, Game 5 outshone Game 2, a 7-6 Houston win in 11 innings on Oct. 25; that contest alone had enough twists to fill an entire series. Los Angles took a 3-1 lead into the top of the 8th; but Houston scored a run in both the eighth and the ninth, when a leadoff home run from Marwin Gonzalez off of Dodger All-Star reliever Kenley Jansen tied things up at 3-3. In the top of the 10th, Altuve and Correa hit back to back home runs to make it 5-3 Houston. (check out Correa’s bat flip). But then Dodgers responded with a Puig home run and an RBI single from Enrique Hernández. Onto the 11th: Springer hit a two-run blast to make it 7-5 in the top of the 11th, and though the Dodgers added a run in the bottom of the inning — on a home run, naturally — Puig struck out swinging to end it.

Justin Verlander, and three Houston relievers, gave up just three hits through nine innings; but they were all home runs. Houston’s first non-home run hit — Hernandez’ game-tying single — came in the 10th. All sorts of other stuff happened in Game 2. For example, a Houston pickoff attempt hit an umpire, preventing a runner from advancing. A base hit bounced off Taylor’s cap in center — he was trying to make a diving stop — and bounced right to left fielder Joc Pederson. The deflection likely saved the Dodgers a run.

Houston’s Game 2 win was the first World Series victory in the the 56-year history of the franchise. It was worth the wait.

Add a little controversy to the World Series mix. During Game 3 Gurriel, the Houston first baseman, made a racist gesture directed towards Yu Darvish, the Los Angeles Dodgers pitcher who is of Japanese and Iranian descent, after hitting a home run off Darvish. Gurriel also uttered a racial slur. Houston won the game, 5-3, but Gurriel’s antics overshadowed the action. Gurriel apologized and Darvish expressed a desire to “move forward rather than focusing on anger.” MLB commissioner Rob Manfred suspended Gurriel for five games, but his punishment starts at the beginning of the next season, not in the World Series. Manfred’s decision raised eyebrows; Gurriel got off fairly easy, and he hit a crucial home run in Houston’s Game 5 victory. If Houston holds on to win the title, we may be debating Manfred’s call all offseason.

As if 2017 wasn’t already loaded with oddities, Tom Verducci of Sports Illustrated dropped a report after Game 4 explaining how pitchers and coaches from both teams were complaining that the baseballs used in the World Series were slicker than usual. The slicker surface makes the balls more difficult to grip, especially when trying to throw a slider. Verducci pointed out that in Game 3, not a single batter swung and missed Darvish’s slider. That hadn’t happened in 34 prior starts. In Game 4, Jansen gave up his first home run of the year on a slider. Dodgers hitters swung and missed on Verlander’s slider just once in Game 2, equaling the fewest whiffs on a slider against Verlander in any start of two innings or more this year. Major League Baseball has said that the only difference is the gold stamping on the ball, which is a switch from a blue ink in the regular season.

Verlander’s starting for Houston in Game 6. Will he get a grip? First pitch: 8:20 eastern. 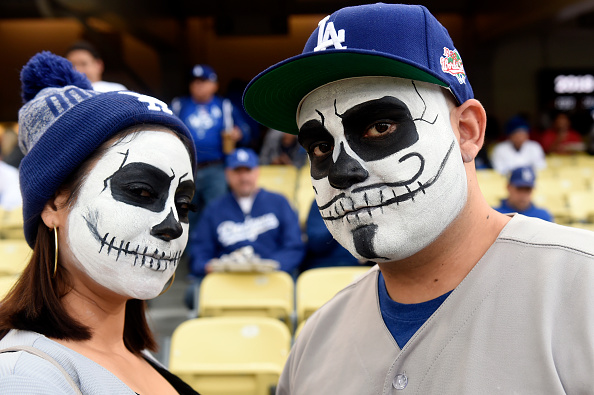 The Internet Could Not the Handle the World Series Happening on Halloween Night
Next Up: Editor's Pick