China Reported a Huge Increase in New COVID-19 Cases. Here’s Why It’s Actually a Step in the Right Direction

Officials in China’s Hubei province revealed Thursday that new cases of COVID-19 had surged nearly 10-fold from the day before—reversing days of declines that experts said were a positive sign for the containment of the virus. The number of deaths increased dramatically, as well, to 242.

Previously, only patients that had received positive results from a laboratory test were included in the publicly reported case count. Confirmed cases will now be based on clinical diagnosis, including the use of CT scans. These were previously only counted as “probable” infections. That means that doctors will have more discretion to give patients an immediate diagnosis, instead of waiting for the results of a laboratory test.

“In terms of monitoring the progression of the outbreak of infections, it’s quite a sensible idea to also report probable cases,” Ben Cowling, a professor of infectious disease epidemiology at the University of Hong Kong, tells TIME. He says that he believes that the numbers reported by Chinese officials may have been undercounted, because China simply didn’t have the ability to test all suspected cases.

For that reason, he says it makes more sense to include those most likely to be infected in the official infection count, instead of only those cases that have been confirmed by a laboratory test.

“In SARS, that’s what was done,” Cowling says.

Many experts say that it’s almost certain that the number of publicly confirmed cases has been lower than the actual number of infections—for a variety of reasons.

“Cases have definitely been underreported all along,” Charles Chiu, a professor of laboratory medicine at the University of California, San Francisco, tells TIME. “There have been reports of likely infected individuals being turned away from hospitals and sent home because the medical system in Hubei is being overwhelmed, with the focus on treating the more severely ill patients,” he says.

Even the statement from Huebi’s health authorities hinted that they have been under-counting the number of official cases of the coronavirus, adding that the change was “in order to be consistent with the classification of case diagnosis issued by other provinces across the country.”

Hours after the announcement of the spike in new cases, the Chinese government announced a political shakeup in Hubei. On Thursday, the Communist Party secretary of Hubei, Jiang Chaoliang, was removed from his post, according to state media. The mayor of Shanghai, Ying Yong, will replace him.

Jiang is the highest-ranking party official removed from office thus far over the outbreak. Public anger has swelled over the handling of the virus, and this week a petition calling on the national legislature to protect citizens’ free speech in China has gained momentum. The petition follows an outpouring of grief over the death of a young doctor who sounded the alarm on the virus and was punished by officials for speaking out.

Steve Tsang, director of the University of London’s SOAS China Institute, says that the move is likely an attempt by Chinese President, Xi Jinping, to show that he is taking decisive action to tackle the outbreak and to re-direct public anger.

“Sacrificing a provincial party secretary is a big deal, and not a step Xi would have taken lightly,” he says. “So, it reflects both a sense of pressure as well as a determination to articulate strength and control.”

The new classification system of COVID-19 was meant to ensure that “patients can receive standardized treatment according to confirmed cases as early as possible to further improve the success rate of treatment,” according to the Hubei Province Health Commission.

The vice president of a Beijing hospital and one of the experts working on the coronavirus response told state broadcaster CCTV that the move is in line with China’s National Health Commission’s latest diagnostic guidelines, reports the South China Morning Post.

Hui-ling Yen, an expert on influenza transmission at the University of Hong Kong, believes the new diagnosis criteria could mean the numbers reported are more representative of the situation on the ground, although she says that this approach is not foolproof.

But experts say that the case count in the rest of China could also be much higher than reported. “It is unclear what the extent of diagnostic testing in China is outside of Hubei province,” Chiu says.

According to local officials, around 5 million people left Wuhan before officials implemented a lockdown of the city on Jan. 23 to attempt to halt the spread of the virus. Tsang of SOAS’ China Institute, says that means that there could be a huge gap in the number of officially reported statistics.

“A very high percentage of the five million would have been migrant workers who returned to their villages, where medical facilities and transport links are so poor that many could not have received the necessary medical attention and tests should they contracted the virus,” Tsang tells TIME. “We do not have information of how many there are, and how infectious they would have been to those who hosted them. The overwhelming majority of those thus infected almost certainly would not have been recorded in the official statistics.”

On Thursday, officials in Hubei had reported just over 1,600 new cases—the lowest figure since the beginning of February. Experts said the declines were promising signals that China’s lockdown of tens of millions of people may be working to contain the spread of the deadly coronavirus.

It is not clear over what time period the newly announced cases were detected.

“I would like to know whether those 15,000 cases are recent cases, or they’re spread out over the last few weeks and this is somehow a backlog of cases that are now reported,” Cowling says.

Hubei, which includes the city of Wuhan—where the coronavirus is believed to have originated, has more than 80% of official cases worldwide.

Write to Amy Gunia at amy.gunia@time.com and Michael Zennie at michael.zennie@time.com. 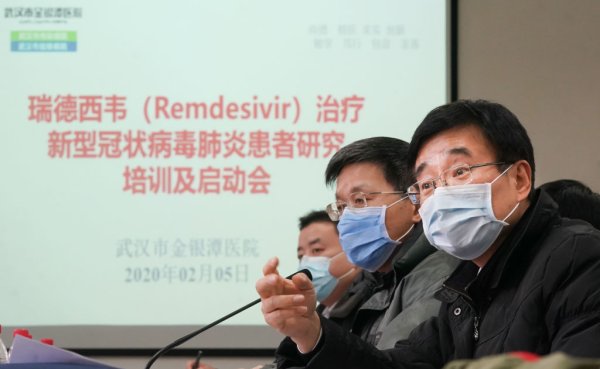 A Chinese Drugmaker Has Started Mass-Producing an Experimental Drug for COVID-19
Next Up: Editor's Pick