The number of new coronavirus infections is continuing to increase daily, but in Hubei province, where the first cases of the virus appeared in the central Chinese city of Wuhan, there are emerging signs that strict control measures implemented by officials could be working.

Publicly reported new infections in the province dropped to about 1,600 on Wednesday—after jumps as large as 5,000 new cases on some days last week, according to data from Chinese authorities and Johns Hopkins University’s outbreak tracker. There were about 2,100 new coronavirus infections reported on Tuesday.

On Wednesday, new infections in Hubei rose by about 5%. Since the beginning of the month, the daily number of new infections has jumped by as much as 56%

“What we’ve seen is a flattening out of numbers of case, particularly in Wuhan and Hubei province, which is quite reassuring,” Ben Cowling, a professor of infectious disease epidemiology at the University of Hong Kong, tells TIME.

Despite the glimmer of hope, the coronavirus infection hit a grim new milestone on Monday as officials in Hubei reported 102 deaths in a single day—the highest total yet. Infections are now more than 45,100 worldwide with just over 500 outside mainland China. There have been 1,115 deaths.

The good news is especially welcome as many Chinese workers hesitantly return to work this week after factories and other businesses across China took extended Lunar New Year vacations at the urging of the government.

Dr. Tedros Adhanom Ghebreyesus, the W.H.O.’s director general, said that the measures put in place in Hubei appear to be “paying off,” but he cautioned that outbreaks can be unpredictable. “We have to understand it with caution because it can show stability for a few days and then they can shoot up,” he said. “I’ve said it many times: It’s slow now, but it may accelerate,” he said, according to the New York Times.

A lockdown of Wuhan, a city of 11 million people where the virus is believed to have originated in a seafood market began on Jan. 23 and expanded to cover cities with 60 million people. The normally week-long Lunar New Year holiday was extended by 10 days across much of China as fears grew about an outbreak of the virus.

Companies also sprang into action—carmakers like Honda and General Motors shut factories in Wuhan, IKEA shuttered all of its mainland China stores, KFC and Pizza Hut have closed thousands of branches, and Starbucks closed about half of its 4,100 shops in the mainland.

The return to work this week is not full-scale. Some assembly lines will remain closed, and many office workers will continue to work from home. The employees of several large Chinese tech firms like ByteDance, which owns the popular app TikTok; tech giant Tencent and online commerce company Alibaba have extended their work from home policies for at least another week, according to the Financial Times. In the tech hub of Shenzhen in southern China, businesses that wanted to reopen were required to check the recent travel histories of all staff, implement temperature checks and mandate mask-wearing, according to Reuters.

“I think there will be a surge in new infections,” Cowling says, though he adds that approaches to testing differ in China outside of Hubei province, where Wuhan is located, so a jump in the number of publicly confirmed cases might not be apparent. “The objective of control measures is to reduce transmission while they are implemented, they don’t have an effect after you stop doing them,” he says.

Others agree that the end of the extended Lunar New Year holiday might not be without challenges. “There could be workers getting infected in some sites in the upcoming days, meaning that these sites will need to be shutdown temporary for sterilization and workers will need to be quarantined,” Tommy Wu, a Hong Kong-based senior economist at Oxford Economics tells TIME.

The virus’ sometimes mild symptoms may be a driver in the increase of the rate of infections, as those who are infected but not showing severe symptoms might go to work. And it’s still not clear whether the virus can be transmitted in the incubation period—while patients are asymptomatic. And estimates vary for the average incubation time of the disease from around 3 to 5 days, though some researchers in China say that in rare cases, the incubation period could be as long as 24 days.

Still, coronavirus cases outside mainland China continue to rise—including on a cruise ship quarantined outside Yokohama, Japan, where 174 of the 3,700 passengers and crew have so far tested positive. And, experts warn, it remains to be seen whether the virus may spread widely outside of Wuhan.

“What we’re not sure about is whether there is the start of epidemics in other parts of China and other countries outside of China,” says Cowling. 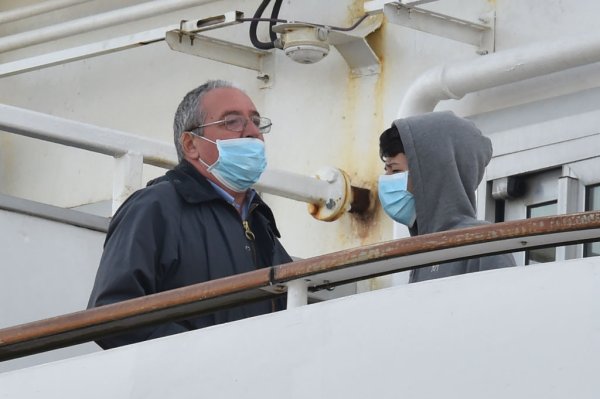 Concern Grows on Quarantined Ship as Coronavirus Cases Climb
Next Up: Editor's Pick