On Tuesday night, New York’s Madison Square Garden really went to the dogs. Quite literally: the stadium was packed with a crowd cheering on their favorites — but not for the Knicks, not Phish, not even Harry Styles. This time, they were assembled for the 144th Westminster Kennel Club Dog Show. And an hour before midnight, the champion was finally crowned: Siba the standard poodle, a surprise to a crowd rooting for the golden retriever and Havanese fan favorites.

“She just has this confidence in herself, this attitude. She keeps me on her toes. She’s so elegant and full of herself and funny,” Siba’s handler Crystal Murray-Clas told reporters before the big win.

Siba the Standard Poodle poses for a portrait at the TIME studio on Feb. 12
Sangsuk Sylvia Kang for TIME

Her owners had already decided that it was Siba’s time to retire after this Westminster round, making the win all the sweeter. “We’re hoping this spring she’ll become a mom. We can’t wait to see her babies,” Murray-Clas told TIME after the show. Even better: Siba will be retiring to live with Murray-Clas and her family, including her two-year-old son, who Murray-Clas says loves Siba already. “Basically whatever he’s eating, she’s eating; he feeds her off the fork,” she said.

And the transition from the glitzy show lifestyle shouldn’t be too much of a stretch: “She just likes being a house dog and hanging out with us, sleeping on the couch all day,” Murray-Clas told TIME of Siba’s off-duty attitude when Siba stopped by TIME for a victory lap photo shoot. “She’s funny, because she can go from this very calm, placid, sweet dog to just a nut. She goes outside, she runs like a maniac, she plays with my two-year-old. He just shrieks, and she’s just barking.” But it’s all in good fun: poodles, Murray-Clas explained, “just want to make you happy.”

This is only the fifth time a standard poodle has won Best in Show, however. First held in 1877, the Westminster show is America’s second-longest continuously-held sporting event. (The Kentucky Derby beats it.) And the Dog Show is also Madison Square Garden’s longest continuous tenant, also dating back to 1877. “We’re the oldest and most prestigious. And the fact that we’re in New York City and have such a rich history in New York, that just makes it bigger, because everything’s bigger in New York,” explained the Westminster Kennel Club’s national television spokesperson Gail Miller Bisher to TIME, sitting down just a few minutes before the final evening’s kickoff.

But the spirited crowds weren’t assembled in midtown on Tuesday night for the history, although the club’s members and guests were in fine form in the front row, wearing black tie attire to honor their past. No, most of the thousands in the Garden were there for the glossy fur, wagging tails and eager personalities of the nation’s top show dogs, who were winnowed down from a field of over 2,500 entrants to only seven. The final contenders for Best in Show: Bourbon the whippet, lean and alert; Conrad the Shetland Sheepdog, whose energy was infectious; Bono the Havanese, a tiny but mighty toy with serious stage presence; Siba the standard poodle, tall and regal; Daniel the golden retriever, an overwhelming crowd favorite; Wilma the boxer, muscled and sleek; and Vinny the wire fox terrier, narrow-faced and perky.

Westminster is unique for its prestige — and its lack of prize money. Winners here are in it for the glory, not the cash. And spectators also have the treat of checking out the dogs backstage during what’s called “benching,” during which the many contestants are set up in rows open to ticket-holders, who can observe the primping and prepping (and plenty of napping) that goes on behind the scenes across the 200 breeds represented at the show. (One new breed was added this year, the Azawakh, after it met the American Kennel Club’s standards of geographic distribution and breed stewardship.) In the behind-the-scenes mayhem, dog fans can pet the prize pups, chat with owners and handlers and ogle the impressive grooming practices.

Tuesday evening saw a rowdy, packed stadium cheering on fan favorites like the golden retriever, who notched a surprise win. Despite being one of America’s most popular pet breeds, golden retrievers have yet to win top honors here. The dog, Daniel, trotted happily off the ring with his blue ribbon in his mouth. Another early surprise came during the sporting group, when an Irish water dog acted up in front of the judge. She dismissed the pooch in a shocking change of pace for a show that was otherwise drama-free.

Usually, as Westminster spokesperson Miller Bisher explained, the dogs aren’t intimidated by the time they reach the big stage. “The judge is really having to look for nuances or finer points: one little thing that’s just a little better than what the others are doing,” she said. “Maybe the dog’s just on that night. They really show well because of the clapping; they know that means positive.”

That was certainly the case for Wilma the boxer, who proudly accepted her top status in the working group. “She feels it,” her handler Michael Shepherd said happily after accepting their prize. “It’s an absolute privilege,” added Vinny’s handler after the wire fox terrier won best in his group. (He was decidedly not a crowd favorite, however, even receiving a few unsportsmanlike boos from the avid watchers. Wire fox terriers have won more Best in Show titles at Westminster than any other breed.)

When all seven finally came out, it was to dramatic music and crowd roars. And after they’d made their rounds and the judge stepped aside to write down his selections, the crowd started up a chant for Daniel, the golden. The runner-up, or “reserve” Best in Show, went to the whippet, Bourbon, to shocked reactions from the crowd. But ultimately it was Siba who received top honors.

Siba the Standard Poodle, who won the 2020 Westminster Dog Show, poses for a portrait at the TIME studio on Feb. 12
Sangsuk Sylvia Kang for TIME

The final night’s Dog Show is not the only event that Westminster hosts during the four-day competition, however. Besides a junior showmanship competition for younger handlers, the club has also added new events in the last few years — for agility and obedience — that open up the circle of competitors from only purebreds to any kind of pup. “What’s expanding is the fun sports that you can do with the dogs,” Miller Bisher said. “[Those] are awesome, and they allow mixed breeds to enter. We love that, because it’s inclusive.” So while the show’s historic exclusivity won’t be changing too much too soon, there’s hope yet for future mutts, rescues and mixed breeds to find their share of the spotlight. 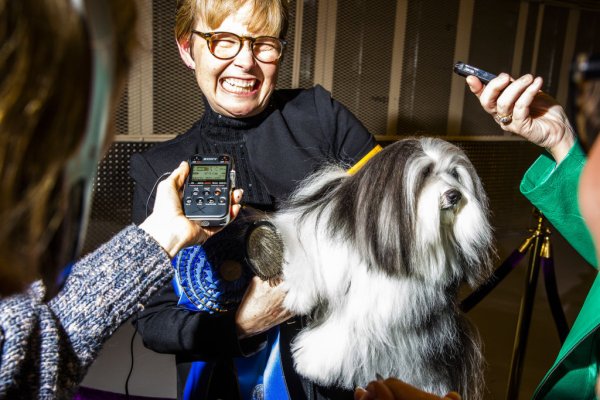