When Bong Joon-ho’s Parasite won the final Oscar of the evening at the 92nd Academy Awards on Sunday night, fans of the globally resonant film were thrilled.

Perhaps no one was more excited than writer-director Bong, who capped off his historic night by looking adoringly at his Best Picture trophy, in a moment that was made to be memed.

The win was a history-making award, as Parasite is the first non-English-language movie ever to win the award in the Academy’s 92 years of ceremonies. “I feel like a very opportune moment in history is happening right now,” producer Kwak Sin-ae said during the group’s acceptance.

Bong’s reaction perfectly captured how the film’s fans seemed to be feeling.

READ MORE: Parasite’s Best Picture Oscar Is Historic. Is This the Beginning of a New Era in Film?

The way Bong delightfully studied his award was not his first meme-making moment of the awards season. Bong previously made waves for his statement that the Oscars ceremony itself was “very local.” At the 2020 Golden Globes, he encouraged Americans to watch more foreign-language films. “Once you overcome the one-inch tall barrier of subtitles, you will be introduced to so many more amazing films,” he said.

Clearly, the internet has become extremely invested in Bong’s journey through the American awards season.

Now that the final bow has been taken on the 2020 awards season, we can only hope Bong keeps this same energy for his likely future wins.

And the engraving moment was just as magical. 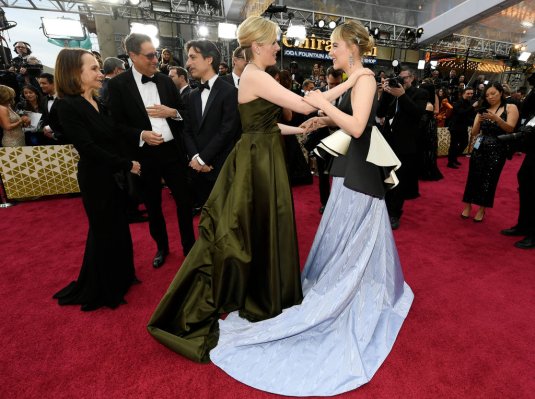 The Little Women Cast Rolled Up to the Oscars 2020 Carpet to Show the March Sister Chemistry Is Going Strong
Next Up: Editor's Pick