People wearing facemasks as a preventative measure following a coronavirus outbreak which began in the Chinese city of Wuhan, line up to purchase face masks from a makeshift stall after queueing for hours following a registration process during which they were given a pre-sales ticket, in Hong Kong on February 5, 2020.
AFP via Getty Images
By Alejandro de la Garza

As the deadly 2019-nCov coronavirus spreads, raising fears of a worldwide pandemic, researchers and startups are using artificial intelligence and other technologies to predict where the virus might appear next — and even potentially sound the alarm before other new, potentially threatening viruses become public health crises.

“What we’re doing currently with Coronavirus is really trying to get an understanding of what’s happening on the ground through as many sources as we can get our hands on,” says John Brownstein, chief innovation officer at Boston Children’s Hospital and a professor at Harvard Medical School. After SARS killed 774 people around the world in the mid-2000s, his team built a tool called Healthmap, which scrapes information about new outbreaks from online news reports, chatrooms and more. Healthmap then organizes that previously disparate data, generating visualizations that show how and where communicable diseases like the coronavirus are spreading. Healthmap’s output supplements more traditional data-gathering techniques used by organizations like the U.S. Centers for Disease Control and Prevention (CDC) and the World Health Organization (WHO). The project’s data is being used by clinicians, researchers and governments.

As of early February, Healthmap’s 2019-nCov data visualization shows China covered with colored dots. Yellow means fewer than 10 cases have been reported in a particular location, with darker shades of orange indicating higher concentrations of infections. Red means more than 50 people have been sickened. Across the country, smaller cities appear as swarms of yellow, while Hubei province, the center of the current outbreak of the novel coronavirus, is covered in red. More yellow dots mark cities around the world — Tokyo, Chicago, Paris — where the virus has made landfall.

Healthmap's data visualization of 2019-nCoV's spread in China and east Asia as of February 10, 2020

“It was just a different way to view what was taking place,” says Brownstein. “And in fact what ended up happening is government agencies started recognizing the value of this sort of intelligence gathering online.” Healthmap is now being used as a data source in the Early Alerting and Reporting project, an international collaboration among public health institutions, including the CDC, that aims to quickly detect biological threats around the world. It’s also used in the WHO’s Epidemic Intelligence from Open Sources initiative, which is intended to rapidly pick up on possible public health threats.

Other technological virus-fighting initiatives have gone further than simply tracking existing outbreaks. BlueDot, a Toronto-based health surveillance company launched in 2014, gathers disease data from myriad online sources, then uses airline flight information to make predictions about where infectious diseases may appear next (air routes, after all, are a common disease vector). Dr. Kamran Khan, BlueDot’s founder and CEO and an infectious disease physician, says this sort of predictive technology is essential both for other companies, like airlines, and for healthcare workers in hospitals, who may be the first to interact with potentially infectious patients. “If a traveler … comes from an area where there’s an outbreak occurring, they’re not going to go to the public health agency’s office; they’re going to go to the emergency department,” says Dr. Khan. “Does the clinician on the front line know how to recognize something that maybe they’ve never seen before?”

Some researchers, meanwhile, aim to identify potentially novel viruses before they even make the jump from animals to humans. The Global Virome Project (GVP), a proposed research endeavor that would build on a previous proof-of-concept project, intends to develop a genetic and ecological database of the vast majority of viruses in animal populations that have the potential to infect humans. Some scientists argue that mapping the human virome (the broad group of viruses that infect humans or live inside our bodies) is a “key priority” in health research. Now researchers say that the decade-long GVP collection effort will enable the development of new vaccines, drugs and other preventative measures before the next outbreak occurs. The enormous amounts of data they collect on viruses worldwide could also be used to train AI algorithms to predict which viruses in animals are more likely to be transferred to human populations.

“We can’t look in just a few species and just a few sites,” says Jonna Mazet, a professor of disease ecology at the University of California Davis and a GVP board member. “We need to really understand [if] it is possible to understand all of the … viral diversity that’s out there in advance.” It’s a huge undertaking. The forerunner of the GVP, USAID’s PREDICT project, had $200 million in funding. Researchers want several times that amount for the GVP; some countries have already begun self-funding the project in piecemeal.

Each of these efforts has its skeptics. Epidemiologists have long used techniques like natural language processing and analyzing airline routes, says Nita Bharti, an assistant professor of biology at Penn State University’s Center for Infectious Disease Dynamics. She argues that such methods have their limits, particularly when it comes to accounting for poorer areas of the world that may be generating less online data. “There are some blind spots and some really underrepresented populations when you’re aggregating across data that tend to represent either well-resourced or wealthy parts of all populations,” she says.

Meanwhile, understanding a virus doesn’t necessarily mean we’ll be able to stop it from spreading — Ebola was known for decades before an outbreak killed more than 11,000 people in western Africa between 2014 and 2016. “It could be interesting to catalogue all the viruses, more than useful,” says Bharti of programs like the GVP. “I don’t really see how it would be applied to a global health response, or how it could necessarily inform prediction.” That program’s projected $1.2 billion price tag is also raising some eyebrows in the cash-strapped world of infectious disease research. “We just need to address the diseases we already know about,” says Michael Osterholm, director of the Center for Infectious Disease Research and Policy at the University of Minnesota.

But advocates of these cutting-edge efforts argue that it’s wiser to prevent outbreaks in the first place rather than fighting them after they start. Researchers tend “to jump on to the last virus found and chase it, and we’ve done that over and over again” says Mazet. “It’s time to change that paradigm.” 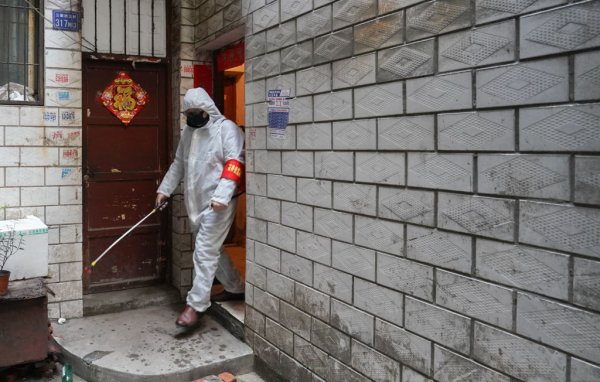 China's Coronavirus Containment Could Be Working
Next Up: Editor's Pick