It has been less than two months since authorities in the central Chinese city of Wuhan announced they were investigating a mysterious pneumonia-like viral infection. In that time, the pathogen—later identified as novel coronavirus 2019-nCov—has spread around China with abandon—from a few dozen suspected cases to more than 20,000 confirmed infections, and causing more than 420 deaths.

But this week could prove crucial for understanding how much farther the outbreak is likely to spread and whether the dramatic efforts of Chinese authorities to contain the coronavirus have been effective.

Officials in China began placing entire cities on lockdown in an attempt to stop the spread of the deadly virus on Jan. 23, when outbound trains and flights from Wuhan— the biggest city in Hubei province, population 11 million— were suspended. The next day authorities broadened the lockdown to include 13 cities, and by Jan. 25 the blockade had expanded to 16 surrounding cities with a combined population of more than 50 million, creating what is believed to be the largest quarantine in human history.

“This week we should start to see the effects of the containment strategy,” Ben Cowling, a professor of infectious disease epidemiology at the University of Hong Kong, tells TIME. “This week is a critical week.”

The virus appears to have an average incubation period of about five days, according to a study published by researchers in China on Jan. 29 in the New England Journal of Medicine. The study focused on the first 425 confirmed cases of the coronavirus in Wuhan, where it is believed to have originated in a seafood market. Cowling says it can take at least another five days for a sick person to be tested and receive confirmation of a coronavirus infection.

“If the number of reported cases begin to slow, this might be an early indication that control measures are working, or are least having an effect on the trajectory of the virus,” Charles Chiu, a professor of laboratory medicine at the University of California, San Francisco, says.

Chiu adds that if the number cases continue to rise significantly this week, it’s reason for additional concern. “It would suggest that the stringent control measures that have been put into place by China to prevent spread… are not adequate to prevent spread of this virus,” Chiu says.

Researchers caution that there are a lot of details they don’t know for sure that could change this calculus. For instance, it’s still not certain how long the incubation period lasts. The U.S. Centers for Disease Control and Prevention (CDC) says it can take anywhere from 2 to 14 days for symptoms to appear. Additionally, it’s still not clear whether the virus can be transmitted in the incubation period—while patients are asymptomatic.

Katherine Gibney, an infectious diseases physician at Royal Melbourne Hospital and an epidemiologist at the Doherty Institute in Melbourne, tells TIME that if the control measures delay the epidemic from taking off in countries outside of mainland China—so far there are less than 200 confirmed cases elsewhere—it might buy medical experts time to develop a vaccine or antiviral medication.

Some researchers believe that, despite the efforts of Chinese authorities, that the number of infections is likely to rise for several months. Gabriel Leung, the chair of public health medicine at the University of Hong Kong said in a Jan. 27 press conference that by his projections, the outbreak might only peak in April or May in major cities in China.

That around 5 million people fled Wuhan before the lockdown went into effect might also have hampered containment efforts. The virus is transmissible enough that the average sick patient, according to the NEJM paper, will infect about two others.

Another factor that could push up infection numbers is the mild symptoms some patients experience. Shira Doron, an infectious disease doctor and epidemiologist at Tufts Medical Center, says that the first patients diagnosed are often those who are very sick, and it might be possible that in the coming weeks it will become apparent that the number of people with mild illness, or even asymptomatic infection, is much larger than currently recorded. Doron says that the death rate reported early in an outbreak often “grossly overestimates the true fatality rate.”

Infections shot up from 639 cases in mainland China on Jan. 23, when officials started putting control measures in place, to around 9,700 cases a week later on Jan. 30. As of Tuesday, the number of cases on the mainland stands at around 20,500. In mainland China, the number of both infections and deaths from the virus has already surpassed that of severe acute respiratory syndrome (SARS), which killed 348 people on the mainland and infected more than 5,000 during an outbreak in 2002 and 2003.

The first cases outside of mainland China were confirmed in Thailand and Japan on Jan. 13 and 16. Cases in South Korea, Taiwan and the U.S. were confirmed on Jan. 21, and there are now more than 194 cases in over 23 countries.

As of Tuesday, 425 people have died in mainland China. There has also been one death in the Philippines and one in Hong Kong.

As infection counts have grown in China, other countries have imposed their own strict measures to curb the advance of the virus—most of them targeting travelers from the world’s most populous nation. Italy and Israel have cancelled all flights from China. Mongolia and Russia have shut their borders with the country, and Singapore has banned the entry and transfer of travelers holding passports issued in Hubei province. In the U.S., the Trump Administration on Jan. 31 declared the coronavirus outbreak a public health emergency and announced that it will temporarily deny entry to any foreign national who “poses a risk” of transmitting the virus. But on Monday, U.S. authorities confirmed the country’s second case of human-to-human transmission in a person who had no recent history of travel to China.

Experts will be watching closely this week for signs that the virus is continuing to grow and spread—especially outside the province where Wuhan is located.

“What we’re worried about is that we don’t see any reduction in the steady increase,” Cowling says. 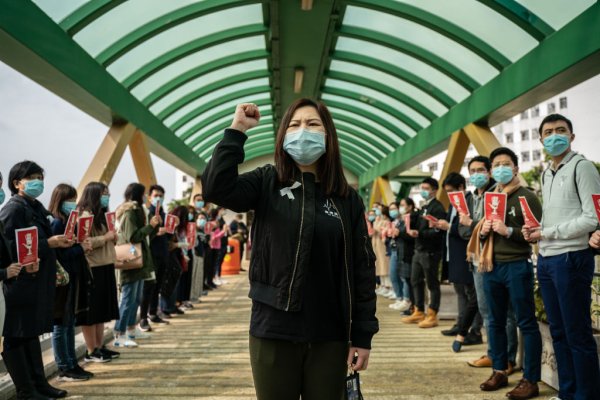