Wednesday, February 6 was supposed to be a moment of pure triumph for Donald Trump. The day after he delivered the State of the Union – and the same week that Democrats struggled to announce the results of their Iowa caucus – a united Republican Party was set to deliver a stern rebuke to the House of Representatives. It would end the “impeachment hoax” and march into 2020 firmly united behind a leader who brooks no dissent.

Then, history happened. For the first time ever, a senator of the president’s party voted to convict and remove a president from office – and it wasn’t just any senator. It was the party’s previous nominee for the presidency. Mitt Romney stood before his Senate colleagues and explained, in nine emotion-laden minutes, why his faith and the facts would not permit him to vote to acquit Donald Trump on Article I. “Corrupting an election to keep oneself in office,” he declared, “is perhaps the most abusive and destructive violation of one’s oath of office that I can imagine.”

Trump’s allies spluttered with rage and scorn. Donald Trump Jr. took to social media to declare his party’s lone dissent a “pussy.” Trump himself tweeted a mocking video that called Romney “slick, slippery, stealthy” and a “Democratic secret asset.” The contrast was clear, the president would counter a statement of conscience and conviction with schoolyard insults.

Trump of course won the vote, 52-48. Even the few other Republicans who expressed discomfort with or disapproval of Trump’s conduct towards Ukraine voted to acquit. This ultimate conclusion was overwhelmingly likely from the beginning of impeachment proceedings. Yet Romney’s statement reminded America why it was wise to press forward anyway. When a president abuses his power, there should be consequences, and those consequences should sting. They should leave a mark on a man’s legacy.

It’s a basic truth of life that vice often leaves virtue with few good options, and so it is with the Ukraine scandal. From the moment Trump released the memorandum recording his “perfect” call, the basic contours of the scandal were clear. The president attempted to use his enormous leverage over Ukraine – a nation locked in an armed conflict with arguably America’s chief geopolitical foe – to extract from its leader a pledge to not only investigate the president’s domestic political opponent, but also to investigate the president’s pet conspiracy theories about the 2016 election.

This was a serious breach of trust with the American people. Yes, presidents hope their foreign policy will help them win election, but presidents are supposed to conduct that foreign policy with the nation’s best interests in mind. Here, President Trump distorted diplomacy in a strategically vital region to seek purely his personal interest. This was Donald Trump declaring, “l’état, c’est moi.”

Censure was never a viable option. Trump would laugh off a partisan House censure vote, and Mitch McConnell specializes in preventing his caucus from facing tough votes. He would never bring a censure vote to the floor. And Trump’s misconduct was far too grave to be drowned out by the cacophony of speeches and campaign commercials in a presidential election that would move at the speed of the news cycle.

An impeachment inquiry, however, meant not just that Congress was at the peak of its constitutional powers as it conducted its investigation, an impeachment vote meant that the Senate had to respond.

Yes, there was a risk – namely that the Republican base would reaffirm its support for its embattled leader and that some independents would view it as a distraction. Moreover, there were very real tactical questions about the House Democrats process. Primarily, should they have slowed down and waited for court battles to resolve questions about presidential privileges and immunities?

Perhaps, but each course of action contained its own perils. There was never going to be a smooth path to a presidential rebuke. And while polls have been mixed – some indicating majority support for removal, but a recent Gallup poll put Trump’s approval rating at the highest point of his presidency – we won’t know the true political impact of impeachment (or whether it will even factor significantly in the presidential race) for some time.

At the end of the day, there is simple virtue in doing all you can to say no – to declare with the power and political force at your disposal that the president abused his power, and he should be held accountable.

Many years ago – during Romney’s first presidential run – my wife and I formed a small, informal group called “Evangelicals for Mitt.” Our task was simple – convince reluctant Evangelicals that the Mormon governor of Massachusetts could represent their values in the Oval Office.

This was a different time, a time before Trump. Evangelical voters seemed concerned with conservative consistency and moral courage. He’d changed his mind on abortion, for example. Was a he a good man, they asked? Could he stand strong against overwhelming pressure and do the right thing?

Indeed he is, I responded. Indeed he would. It’s been fourteen years since I first heard those questions. And yesterday, when I watched him defy his party to deliver a message heard loudly and clearly in the heart of the Oval Office, I thought back to that very different time. I remembered those questions and knew unequivocally the truth of my answers. He is a good man. He can stand against the tide. And thanks in part to him, the act of impeachment stung a president who richly deserved a public rebuke. 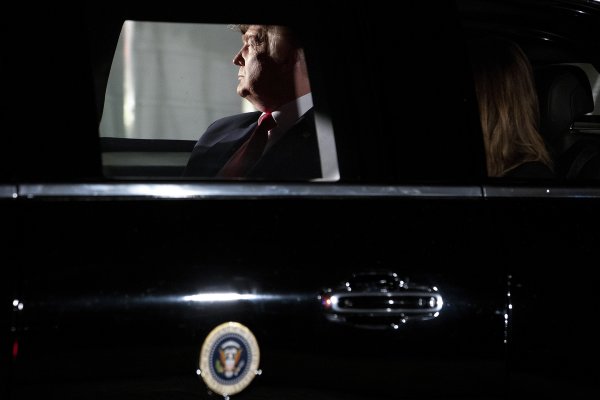 The Dangerous Idea at the Heart of Trump's Acquittal
Next Up: Editor's Pick