Breaking With His Party, Mitt Romney Will Vote to Convict Donald Trump on Abuse of Power

President Donald Trump wanted universal Republican opposition to impeachment. Mitt Romney wouldn’t give it to him. Instead, he handed Democrats the gift of a bipartisan conviction.

The Utah Senator and 2012 Republican Presidential nominee on Wednesday became the sole Republican to cross party lines in the impeachment of President Trump, saying he would vote to convict the President on the first article of impeachment —abuse of power — but acquit on the second article of obstruction of Congress.

“I knew from the outset that being tasked with judging the President, the leader of my own party, would be the most difficult decision I have ever faced,” Romney said in a speech on the Senate floor. “I was not wrong.”

But, Romney continued, the President’s defense team simply did not convince him that Trump was not abusing the power of his office when he asked Ukrainian President Volodymyr Zelensky to investigate allegations regarding the son of former Vice President Joe Biden, a potential political rival for his reelection. “There’s no doubt in my mind that were there names not Biden, the President would never have done what he did,” Romney said.

Romney was one of the few Senators who kept his decision close to the vest in recent weeks as lawmakers have debated the impeachment charges. He was one of the last Senators to give his speech on the floor before the vote on Wednesday, and did so before a nearly empty chamber. Just two other Senators were on the floor while he gave his typed speech, which he read from a binder.

His vote will make him the only Republican in Congress to deem Trump guilty of at least some allegations for which he was impeached by the House: withholding aid to Ukraine in exchange for a promise of a politically beneficial investigation and then obstructing Congress as they tried to investigate on. Republicans in the House remained completely unified when Democrats impeached Trump last December. Only Rep. Justin Amash, who renounced ties with the party last year, has said he supported both articles of impeachment.

Both the President and Republican congressional leaders have used their unity to argue that Democrats had overreached by embarking on the impeachment process. “In December, House Democrats realized the Framers’ nightmare: A purely partisan majority approved two articles of impeachment over bipartisan opposition,” Senate Majority leader Mitch McConnell said Tuesday in his speech announcing he would vote to acquit Trump.

Romney’s vote will poke a hole in that argument, and the intra-party ramifications were almost immediately clear. “Mitt Romney turns his back on Utah,” read the subject line of a press release from the Republican National Committee. It was accompanied by a tweet from the organization’s chairwoman, Ronna Romney McDaniel, who also happens to be Romney’s nice. “This is not the first time I have disagreed with Mitt and I imagine it will not be the last,” she wrote. “The bottom line is President Trump did nothing wrong and the Republican Party is more united than ever behind him.” The President’s son, Donald Trump Jr., suggested on Twitter that Romney should be expelled from the party.

Republican Senators though, took a much more neutral stance toward their colleague, insisting that every lawmaker had a right to their own vote. “I don’t really know how you expel somebody from the Republican party,” said North Dakota Senator Kevin Cramer. “I’m sure he thinks it was the right thing for him to do,” said Texas Sen. John Cornyn. “I disagree but I respect his [decision.”

But Romney’s decision to convict the President encapsulates the longstanding tensions between himself and Trump, dating back to Trump’s presidential candidacy four years ago. As it became increasingly apparent Trump would be the nominee, Romney took the stage at the University of Utah to issue a prohibitive warning. “If we Republicans choose Donald Trump as our nominee, the prospects for a safe and prosperous future are greatly diminished,” he said, going on to outline the ways in which a Trump presidency would damage America.

The politicians’ rivalry has never been fully mended. Although Romney took a meeting with Trump when he was considering contenders for Secretary of State, and Trump later endorsed him when he announced he was running for Senate, Romney has frequently sought to establish himself as independent from the President.

“I will support policies that I believe are in the best interest of the country and my state, and oppose those that are not. I do not intend to comment on every tweet or fault,” he said in a Washington Post op-ed two days before he was sworn in as a Senator. “But I will speak out against significant statements or actions that are divisive, racist, sexist, anti-immigrant, dishonest or destructive to democratic institutions.” He again lambasted Trump, who was then in the middle of a government shutdown. “On balance,” he wrote in that same op-ed, “[Trump’s] conduct over the past two years, particularly his actions last month, is evidence that the president has not risen to the mantle of the office.”

Evidently, Romney felt that, this time, Trump’s actions did not just fail to meet the threshold of Presidential behavior, but warranted removal from the office entirely.

“Were I to ignore the evidence that has been presented and disregard what I believe my oath and the Constitution demands of me for the sake of a partisan end, it would, I fear, expose my character to history’s rebuke and the censor of my own conscience,” Romney said on Wendesday. 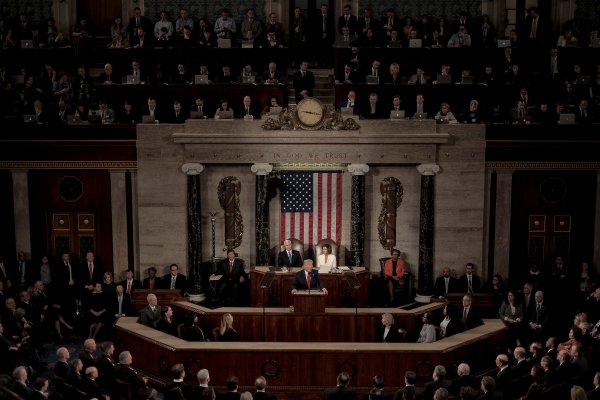 Trump Makes His Own Case to America
Next Up: Editor's Pick