In its latest addition to an ever-growing collection of documentaries, Netflix’s The Pharmacist, which premiered Feb. 5, presents a moving look at the ways grief can spur a person into activism. Spanning the early days of the U.S. opioid epidemic, the four-part documentary series shows how one person, after suffering a loss, finds a modicum of healing through the act of saving others.

Central to the series is Dan Schneider, a pharmacist living in St. Bernard Parish in Louisiana, a community located southeast of New Orleans, who becomes an unlikely hero. The beginning of the series focuses on the devastating death of Schneider’s son, Danny Jr., who was fatally shot at the age of 22 while trying to buy crack in New Orleans’ Lower Ninth Ward in April 1999. Like many true crime documentaries, The Pharmacist follows an unsatisfying investigation conducted by police, who initially find no leads for Danny Jr.’s murder, largely due to a culture of silence around talking to authorities within the community where the crime took place.

Schneider, who had previously lived a happy life as a middle class father of two children, decided to do the detective work that, in his view, the police did not carry out. For weeks, he knocked on the doors of people who lived in the vicinity of where Danny Jr. was killed, despite the risk of violence. The police, who were still looking into the case, first said they had found an eyewitness named Jeffery Hall, leading to some hope for Schneider that the murder would be resolved. But Hall’s account was determined to be unreliable; the person he identified as the murderer had been in jail the night Danny Jr. died.

These obstacles did not stop Schneider, who continued his own investigation by calling every house in the area. He also started keeping meticulous recordings of the conversations he had, including with the potential witnesses in his son’s murder case. The audio recordings, often played over images of the Schneider family, the pharmacy where Schneider worked or shots of Schneider in his home, make up much of the series. Eventually, Schneider found Shane Redding — a nearby resident who said she had witnessed the crime. Redding revealed that the killer was, in fact, Jeffery Hall — the initial eyewitness.

In naming Hall and taking the stand in the murder case, Redding risked her life and had to be placed in witness protection. Hall, the son of Redding’s best friend, was 15 years old when he killed Danny Jr. He pleaded guilty to manslaughter in 2000 and served 13 years of a 15-year prison sentence, according to the documentary. Hall, who appears in the series, tells filmmakers he took his time in prison to try and better himself, finish school and work on anger management.

The story of a grieving father avenging his son’s murder would typically end with Hall’s arrest and conviction. Schneider’s own investigative work was essential to solving the case and provided some closure, if not an end to his grief. But in The Pharmacist, the resolution of Danny Jr.’s murder is really just the beginning for Schneider’s journey.

The rest of the series shows how Schneider, a pharmacist since 1975 who was now armed with his recording equipment and a newfound sense of justice, quickly picked up that a growing number of his customers were coming in with prescriptions for OxyContin. The powerful, addictive painkiller, which Purdue Pharma made and promoted the use of, is believed to be linked with the opioid addiction epidemic that has ravaged American lives in recent decades. Nearly 50,000 people died from the opioid crisis in 2017 alone, and the nation’s overall life expectancy has declined due to the crisis. After facing several lawsuits in multiple states for allegedly contributing to the opioid crisis, Purdue Pharma filed for bankruptcy in September 2019.

These days, the far-reaching devastation of the epidemic is well-known. The Pharmacist presents an early look at what would become a national health crisis, as the use of OxyContin rose in popularity in the late 1990s and early 2000s. When Schneider first detected that something was wrong in late 2000, after seeing a growing number of young adults between ages 18 and 25 coming to the pharmacy every day with prescriptions for OxyContin, he recalled his son, whose issues with crack he’d been unaware of prior to his death.

“I realized how blind I had been to the addiction problem,” Schneider says in the series, adding that addiction was not covered in class when he attended pharmacy school.

Concerned about the fate of the young people frequenting his pharmacy, Schneider again became an unofficial detective in an effort to figure out why he was seeing an uptick in prescriptions for such powerful painkillers. His search led him to Dr. Jacqueline Cleggett, who ran a pain management clinic in New Orleans and wrote most of the prescriptions that patients brought to the pharmacy. According to Schneider, the prescriptions were similar, often prescribing 40 mg or more of OxyContin along with other medications like Xanax and Soma (taken together, the combination of drugs was known as the “holy trinity”). Cleggett, described as running a “pill mill,” was one of several doctors around the country who sold prescriptions for such drugs for profit.

Schneider started cautioning customers, who often did not show signs of chronic illness or pain, that the drugs they were prescribed might be too strong for their ailments. His warnings were rarely heard. Between 2000 and 2001, abuse of OxyContin around the United States became widespread, prompting closer attention from national media. St. Bernard Parish, which had a population of about 75,000 at the time, became known as one of the hubs of the epidemic, with one of the highest per capita overdose rates in Louisiana, according to the series, and the community received coverage from national outlets. A December 2000 TIME article referenced in the series described an “epidemic” of OxyContin abuse in St. Bernard Parish, noting that at the time, at least five people in the town had overdosed on the drug.

As national attention turned to the opioid epidemic, Schneider continued in his efforts to take down Cleggett. Schneider grew obsessive in his fight against the spread of the opioid crisis, according to the numerous audio recordings he provided for the series. He ended up collaborating with the FBI, the Drug Enforcement Administration (DEA) and other authorities that were independently investigating Cleggett, which eventually resulted in her license being suspended. She pleaded guilty in 2009 to illegally dispensing controlled substances, but faced no prison time. Cleggett appears in The Pharmacist’s final part and defends herself against accusations of wrongdoing.

The Pharmacist is a quieter kind of hero’s story, highlighting how Schneider’s efforts as an individual facing a system much larger than himself helped to solve two cases. But the grief, over the loss of his son as well as the continued damage wrought by the opioid crisis—which Schneider saw exacerbated by the destruction of Hurricane Katrina—remains, and continues to push him forward. As he says toward the end of the series, “That I could make a difference, or be a part of something that can make a difference, may very well be a reality.” 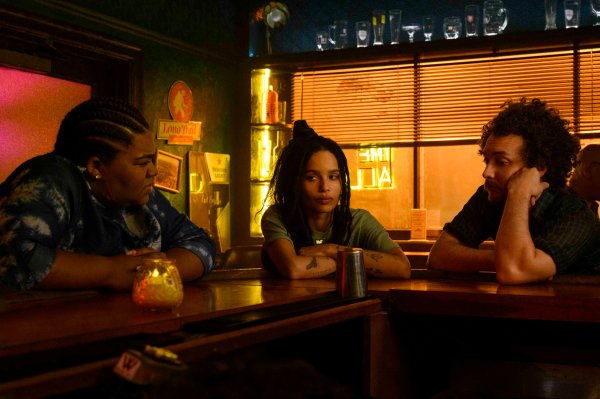 Zoë Kravitz's Hulu High Fidelity Series Is So Much More Than a Gender-Flipped Reboot
Next Up: Editor's Pick