Allegations Against the Maker of OxyContin Are Piling Up. Here’s What They Could Mean for the Billionaire Family Behind Purdue Pharma

Executives from Purdue Pharma, the manufacturer of the powerful opioid painkiller OxyContin, admitted in federal court in 2007 that Purdue’s marketing practices and interactions with doctors had understated the strength and addictive potential of the drug — an omission that many experts believe contributed to an opioid epidemic that claimed nearly 50,000 American lives in 2017 alone.

But on Thursday, the release of a previously sealed deposition from 2015 showed that Purdue executives knew of OxyContin’s strength long before that $600 million settlement. The deposition, which had been filed in court, revealed that Dr. Richard Sackler — part of the family that founded and controls Purdue, and who has served as Purdue’s president and co-chairman of the board — knew as early as 1997 that OxyContin was much stronger than morphine, but chose not to share that knowledge with doctors.

“We are well aware of the view held by many physicians that oxycodone [the active ingredient in OxyContin] is weaker than morphine. I do not plan to do anything about that,” Purdue’s head of sales and marketing, Michael Friedman, wrote in an email to Sackler, according to the deposition, which was obtained by ProPublica and co-published with STAT. “I agree with you,” Sackler wrote back. “Is there a general agreement, or are there some holdouts?”

The document’s publication comes just weeks after the release of an unredacted 277-page lawsuit filed against Purdue by Massachusetts Attorney General Maura Healey — itself just one of thousands of legal complaints brought against Purdue and other pharmaceutical companies by plaintiffs across the country, many of which have been rolled into one multi-district litigation in Ohio federal court. And as the evidence mounts, legal experts say Purdue could face serious consequences, from astronomical fines to injunctions that could threaten its ability to do business.

“One theme that clearly emerges from this deposition, brick by brick, is the foundation that is laid, that shows how even after this guilty plea there was a shocking lack of care for people that were at risk of abusing this drug and instead a singular focus on profit,” says Joseph Khan, a Philadelphia-based attorney who is currently bringing suits against corporations involved in the opioid epidemic.

As the New York Times reported, parts of Sackler’s deposition are in conflict with his previous testimony. For example, a 2006 Department of Justice report suggested he knew in 1999 that users in internet chatrooms were discussing abuse of the drug. In the deposition, however, Sackler said he first learned of its street value in a 2000 Maine newspaper article.

In a statement provided to TIME, Purdue said the “intentional leak of the deposition is a clear violation of the court’s order and, as such, is regrettable.” The statement adds that, “Dr. Sackler described Purdue’s efforts to adhere to all relevant laws and regulations and to appropriately reflect OxyContin’s risks of abuse and addiction as the science of opioid pain therapy evolved over time.”

Much of the material included in the deposition pertains to activity carried out before the company’s 2007 settlement, while Healey’s suit relates to post-2007 behavior. But Khan says the ramifications of the document are still relevant today, given the judgements Purdue could face from juries.

“There are straight contradictions between what’s in here and what the Department of Justice has put together. This is not something that will play well in front of a jury,” Khan says. “They don’t have as much leverage as they might want.”

The Massachusetts complaint also includes dramatic accusations about how much Purdue executives knew about their blockbuster drug, and when they knew it.

According to lawsuit, members of the Sackler family and other Purdue executives purposefully downplayed the addictive properties of OxyContin, and promoted sales tactics meant to encourage doctors to prescribe as much OxyContin, in the highest doses and longest durations, as possible — despite the potential risks for abuse, and despite the terms of Purdue’s prior settlement with the federal government. The suit also details Purdue’s plans to sell addiction treatments, helping them dominate “the pain and addiction spectrum.” Purdue’s board, controlled by the Sacklers, also voted to pay out $4 billion to the family between 2007 and 2018, the documents show.

In a statement provided to TIME, a Purdue representative said the attorney general’s office “seeks to publicly vilify Purdue, its executives, employees and directors by taking out of context snippets from tens of millions of documents and grossly distorting their meaning. The complaint is riddled with demonstrably inaccurate allegations,” they said, and “offers little evidence to support its sweeping legal claims.” Purdue fought to keep portions of the suit from being released publicly.

If successful, Massachusetts’ lawsuit could force Purdue to pay not only significant fines, but also require the company to cease certain behaviors and make efforts to remedy the damages it has allegedly caused, Khan says.

“If you think about what would restitution look like, these are staggering, almost incalculable costs,” Khan says. But the problem goes beyond money. “What would it mean to stop this epidemic they’re accused of putting into place?” he asks. “You’re not going to find anyone who knows anything about the opioid epidemic who will just say you can solve this problem overnight with a quick fix.”

John Jacobi, a professor of health law and policy at Seton Hall Law School, called the Massachusetts complaint “extraordinary in the length and depth of the allegations against individual defendants,” but says it is “more or less consistent” with the roughly 1,200 complaints included in the Ohio MDL, as well as the hundreds of others individually making their way through state court systems.

And for that reason, Jacobi says, Purdue could be facing consequences much larger than those included in Healey’s complaint. Opioid manufacturers could face a situation similar to the 1998 Master Settlement Agreement with Big Tobacco, which forced five major manufacturers to pay out billions of dollars over cigarette marketing and promotional practices. (Mike Moore, the lawyer who orchestrated the Master Settlement Agreement, is now bringing a new suit against opioid distributors and manufacturers. He was not immediately available for comment to TIME.)

“Many people have suggested that the only way out of the thicket that all of these litigants find themselves in would be some sort of global settlement similar to what was achieved in the tobacco litigation, and I don’t think that’s a far-fetched suggestion,” Jacobi says. “All of those, at some point, will be gathered up and resolved.”

Khan agrees that the volume of lawsuits in the MDL could hold a major threat for opioid manufacturers. And the results of MDL cases set for trial later this year will likely set the tone for other individual suits, like Healey’s, filed around the country, he says.

“There becomes a point at which it becomes mathematically impossible for every one of those plaintiffs to receive what they’re seeking,” Khan says. “Some of these companies are not going to be equipped to survive. Purdue may or may not be differently situated.” 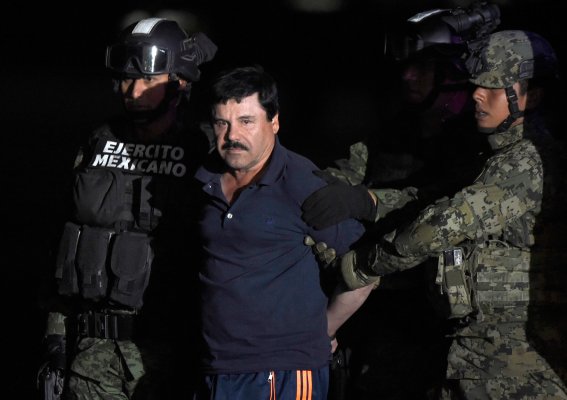 A Lesson About the Fight Against Drug Trafficking From the El Chapo Trial
Next Up: Editor's Pick