Purdue Pharma Responds to Wave of Opioids Litigation by Filing for Bankruptcy. What Happens Now?

Purdue Pharma, a pharmaceutical company facing an onslaught of litigation for allegedly contributing to the opioid crisis, filed for bankruptcy on Sunday as part of a tentative, yet controversial settlement with state and local governments.

Purdue is being sued in various courts over using allegedly deceptive marketing practices to promote its prescription painkiller OxyContin. One major federal case before an Ohio judge involves at least 1,600 consolidated lawsuits from across the country, including regions hard-hit by the crisis, like Portsmouth, Ohio, and Huntington, W.Va. On Monday, the judge overseeing that case removed Purdue as a defendant, the Associated Press reported. Purdue said in a statement on Sunday that it had reached the possible settlement with members of the plaintiffs’ counsel, in addition to 24 state attorneys general.

Purdue announced in its statement that the proposed settlement is “estimated to provide more than $10 billion of value to address the opioid crisis.” It did not admit to any wrongdoing.

More than 215,000 people died in the U.S. from overdoses related to prescription opioids between 1999 and 2017. The number of deaths were five times higher in 2017 than 1999, according to the Centers for Disease Control — nearly 50,000 Americans died in 2017 alone. That year, the U.S. Department of Health and Human Services declared the opioid crisis a public health emergency.

“This settlement framework avoids wasting hundreds of millions of dollars and years on protracted litigation, and instead will provide billions of dollars and critical resources to communities across the country trying to cope with the opioid crisis,” said Steve Miller, Chairman of Purdue’s Board of Directors in an emailed statement to TIME.

The Sacklers have agreed to pay “a minimum of $3 billion” under the new proposed settlement, according to Purdue’s statement. For some state attorneys general that is good enough.

West Virginia Attorney General Patrick Morsey said in a statement last week that he signed on to the proposed settlement to protect the state’s interests. “Having a prearranged framework enhances the potential financial recovery West Virginia may realize from its lawsuit, as opposed to the crumbs it could receive through a long, drawn-out free fall bankruptcy proceeding that may linger for months or years,” Morsey said. “I can pull West Virginia from the framework at any time, but the price of not participating in the bankruptcy process now would have cost our office its place to influence a final settlement. This is the best way to protect the state’s interests.

But many attorneys general are not on board. AGs from at least 24 states and Washington, D.C. have rejected Purdue’s deal, according to the AP.

New York’s Attorney General Letitia James said in a statement on Monday that “it shouldn’t come as a shock that Purdue’s bankruptcy filing comes just 48 hours after my office exposed about $1 billion in wire transfers involving Swiss bank accounts.”

Other attorneys general who have spoken out against the deal take specific issue with how the Sacklers will not pay enough and have instead diverted any financial burden from litigation to a largely hollowed-out company. North Carolina’s Attorney General Josh Stein said in a statement emailed to TIME that “the Sackler family sucked billions of dollars out of Purdue and is now throwing the carcass of this drug company into bankruptcy.”

Pennsylvania’s Attorney General Josh Shapiro said in a statement emailed to TIME that “this bankruptcy filing is another attempt by the Sacklers to run away from responsibility and avoid paying for the opioid epidemic they engineered.” He added, “this family has moved all of the value out of Purdue Pharma and into their own pockets.”

Massachusetts Attorney General Maura Healey said at a press conference on Monday morning that any settlement “should not be about billionaires looking to use the bankruptcy process as a vehicle to further shield their assets and escape accountability.” Massachusetts had already filed a separate case in state court against the opioid developer.

Healey said that she would make filings in bankruptcy court in New York and in state court “relatively soon” to “oppose the settlement” and “oppose any effort from Purdue or the Sackler’s to stop us from litigating here in Massachusetts.”

“This is not going to require the Sacklers to pay back any of the profits they took out of Purdue from sales of OxyContin over the last many years. Not a dime,” Healey says. “How is this settlement being funded? From the continued and future sales of OxyContin here and abroad.” Healey says it’s “offensive” to her to “allow a settlement that allows Purdue and the Sacklers to continue to sell OxyContin when everyday people in this country are dying as a result of opioids.”

Not enough money to go around

“I don’t think it’s a surprise to anybody” that Purdue filed for bankruptcy, Abbe Gluck, a Yale law professor and faculty director of the Solomon Center for Health Law and Policy, tells TIME. There had long been concerns the company “just did not have enough money” to go around, she explains.

And even though many state attorneys general have opposed the deal, Gluck believes it doesn’t run counter to the Ohio cases, “but rather, part of it.” She described it as a likely result of ongoing negotiations as counsel for plaintiffs in that case has signed on to the deal. She even views the possible settlement as a “victory” for the parties involved in those federal lawsuits — “the best attempt yet to get a settlement.”

There were also hopes that a collective settlement like this would prevent a scenario in which states with faster court systems would receive more money from Purdue, Gluck says.

Purdue Pharma said in its statement that under the proposed settlement, a new company that would be governed by a board chosen by claimants and approved by the bankruptcy court, would work towards contributing tens of millions of doses of opioid overdose reversal and addiction treatment medications at no or low cost.

But it still remains unclear how exactly the money from the settlement will be distributed among states, counties and cities, according to Peter Meyers, professor emeritus of law at George Washington University.

He compares the litigation to the fight against big tobacco in the late 1990s, when attorneys general for all 50 states reached settlements under which tobacco companies would pay them forever. Under that settlement, every April 15, the five largest tobacco companies pay $9 billion dollars to state governments every year, according to the Associated Press.

“One of the sad results of the old tobacco settlement was the assumption that a lot of that money would be going to dealing with smoking-related illnesses,” Meyers says. Eventually, he said, “only a tiny fraction of money from cigarette companies” went towards helping those who were harmed and was channeled instead towards a “general treasury” for tasks like building roads.

Still, “the beauty of the tobacco company settlement is that it solved everything,” Meyers says. If many states “hold out, well then, there isn’t any real closure,” Meyers says about the possible Purdue settlement.

Filing in bankruptcy court could also “fundamentally change the dynamics and pace of the settlement,” Joseph Khan, a Philadelphia-based attorney who is currently bringing suits against corporations involved in the opioid epidemic, tells TIME.

Filing for bankruptcy in court also triggers an automatic stay that prevents new lawsuits against the company in question, Khan explains.

Bankruptcy proceedings are generally designed to bring anyone who has or may have a claim in to court, Gluck adds. Whether a bankruptcy proceeding can fully dispose off Purdue’s total financial liability will become clearer as the case unfolds, she says. That’s because the court will decide if the states who are unhappy with Purdue’s deal can still sue in their own state courts.

Healey, the Massachusetts attorney general remains undeterred and committed to “aggressively” prosecuting a case against Purdue and the Sackler’s. She said about the proposed deal, “It’s not accountability. It’s not transparency. And it’s not making perpetrators pay.”

The original version of this story misstated the number of attorneys general that have rejected the deal. AGs from 24 states and the District of Columbia have so far rejected the deal, not 26 states. 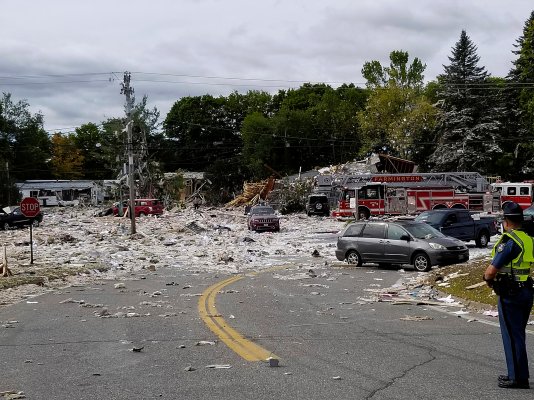