Microsoft’s Xbox One X is the most powerful console available on the market. If you want to play a game in true 4K, with the clearest visuals and highest resolution, but don’t want to drop more than $1,000 for a high-end gaming PC, the Xbox One X will take care of your needs.

Even better than the system itself is the Xbox Game Pass. For $9.99 a month, Microsoft gives players access to a rotating list of 200 games. These aren’t third tier and C-list games either. Right now you can play The Witcher 3, The Outer Worlds, and Gears of War 5 on Game Pass without having to pay $60 for each full game.

Below is a list of the 10 best games you can play on the Xbox One X.

It shouldn’t have taken this long for the Gears of War franchise to spin-off a tactical shooter. The franchise defined cover-based shooting for a generation, but its latest installment—Gears 5—showed the formula was growing stale. Gears Tactics takes the setting and enemies and slows the action way down, asking the player to make smart decisions about how and when to attack enemies. The story is a prequel, set years before the events of the original story. The new characters are compelling and the tactical gameplay is a perfect fit for a game about sneaking up behind bug-men and ending them with a chainsaw.

Ori and the Will of the Wisps

An unsung glory of the Xbox One is its commitment to publishing fantastic and beautiful games from smaller studios. Ori and the Will of the Wisps is a platformer action game in which players explore a large open world while collecting items, battling foes, and unlocking new parts of the map by killing enemies and learning new powers. The visuals are stunning and the soundtrack swells and changes as the player explores the haunted forest setting. It’s a tragic fairytale with tight controls elevated by the beauty of its visuals.

Buy now: Ori and the Will of the Wisps, Amazon

Halo is great, but Call of Duty: Modern Warfare is the best first-person shooter available on the Xbox One. Its single-player campaign is one of the best in the franchise’s 17-year run, but the multiplayer is the real draw and joy of Call of Duty. Warzone, Call of Duty’s take on Fortnite’s Battle Royale gameplay mode, is a chaotic delight. Squads of up to four drop into a 150 player free-for-all and compete for dominance. The longer the game runs, the more gear players gather, but the smaller the arena gets and the wilder the fights become.

There’s no other game on the market like Sea of Thieves, which simulates the life of a pirate by pitting the player against the pitiless sea. Crew up with friends and run a pirate ship, or try to make a go of it on your own. It’s dangerous out there on the sea, though —other groups of players patrol the waters looking for new blood to terrorize and rob. Go on grand adventures, fight skeleton pirates, and struggle to survive in the Xbox’s most unique game.

Sunset Overdrive is one of the most criminally underrated games of the generation. Developed by Insomniac Games, the people behind the PlayStation’s excellent Spider-Man, Sunset Overdrive is a fast-paced open-world action game where you’ll traverse a city by sliding across rooftops and shooting at mutants. If you’re looking for the spiritual sequel to Tony Hawk’s Pro Skater, this is it. It’s a bright and colorful explosion of 2000-era punk rock energy that begs the player to climb every building, shoot every mutant, and slide down every guardrail.

Halo 5: Guardians is like world-class fan fiction. The story is fun, but it feels like it was written by a fan and isn’t quite up to the level of the franchise’s best installments. But the gameplay, multiplayer, and level design all stand out. If you own an Xbox One or are a first-person shooter fan at all, then you have to try Halo 5.

It’s hard to find a good racing game these day — 2017’s Gran Turismo Sport on the PlayStation 4 was a disappointing entry in the franchise. Thankfully, racing fans have Forza Horizon 4. Set in an open-world Great Britain lookalike, Forza Horizon 4 lets players race in more than 450 different licensed cars. There’s dynamic weather, a constantly updating roster of events and races, and servers boasting up to 72 drivers at a time.

The Witcher 3: The Wild Hunt

If you’ve watched Netflix’s The Witcher, then playing through the game is a no-brainer. Like the other games on this list that appear on other consoles, the Xbox One X version of The Witcher 3 is the most gorgeous version. Geralt’s journey through war-torn Temeria pops to life on the Xbox One X, and the monsters he encounters on his journey are so grotesque and beautiful they deserve the best presentation possible.

Playing Hitman 2 is like tip-toeing through an intricate and masterfully constructed clockwork theme park. In each scenario, Agent 47 has to take down a target, but the way the player can accomplish this goal is shockingly freeform. It’s possible for the bald assassin to walk up to his target and shoot him in broad daylight, sure, but the clever player can spend hours setting up the perfect kill. See the target feeding watermelons to hippos in his private reserve? Push him in. Need to take out the head of a cartel? Dress up like a famous tattoo artist, wait for the boss to come in, and give him body art he won’t forget. 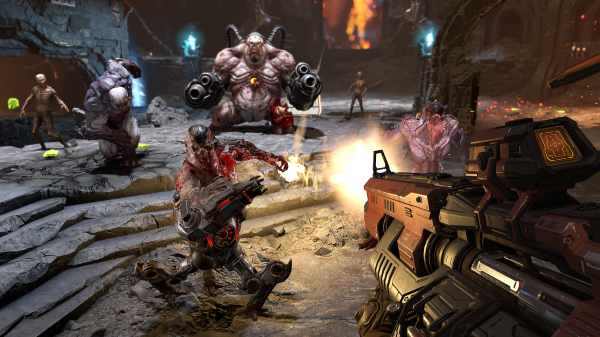 Watch Us Play Doom Eternal, the Most Pure Form of Doom Ever Made
Next Up: Editor's Pick