With Acquittal in Sight, Donald Trump Makes His Own Case to America

It’s Donald Trump’s moment to not screw up.

As Trump wrapped up the final State of the Union address of his term on Tuesday, he was close to having survived impeachment, the greatest challenge to any presidency. He’s held his party together through the exercise of raw political power, delivering bolts of fear by Tweet and governing from the base to drive astronomical approval ratings among Republicans. He’s presided over a humming economy and record low unemployment.

But for months, Trump and his allies have argued that the near-constant drumbeat of investigations — first Special Counsel Robert Mueller’s probe into Russia’s effort to help Trump get elected, and then the Democrats’ impeachment of Trump for asking Ukraine to launch politically-expedient investigations into the Bidens — has distracted voters from his accomplishments.

Now, with the impeachment trial slated to come to a close on Wednesday, the table will be cleared for Trump to make his case to America. The mood in the West Wing became “very positive and upbeat” as Trump’s acquittal by the Senate looked increasingly inevitable, a White House official says.

The President’s Tuesday night speech, according to an aide, had been written to reflect his “relentless optimism” for the country. Trump didn’t mention his impeachment, and he largely hued to his prepared remarks. He took credit for what he called a “blue collar boom.” He described Democrats as the “radical left” and threatened that “socialism” would destroy the American health care system. He called for prohibiting access to federal health care programs for immigrants in the U.S. illegally, a point that elicited groans from Democrats in the audience. He promised to end the opioid epidemic and eradicate AIDS, and bring U.S. troops home from Afghanistan.

“My fellow Americans, the best is yet to come,” he concluded.

But if there’s anything we know about Trump, it’s that message discipline isn’t his thing. “Trump somehow finds a way even in great moments to wreck them,” says Frank Luntz, a long-time Republican pollster. “It’s his own fault,” Luntz says. “His Twitter outshouts his accomplishments.”

Trump is planning to do a lot of shouting in the coming months. He’ll be stepping up the pace of his reelection rallies, appearing in New Hampshire before the next major Democratic primary as he did in Des Moines, Iowa, on Jan. 30. His reelection campaign flooded Iowa with more than 80 senior GOP officials and politicians to bring out voters for the largely uncontested Republican primary. It was a test run of the machinery he’ll need to win Iowa, a perennial swing state, in November. It also unexpectedly turned into an opportunity to draw a sharp contrast between his campaign and the Democratic Party’s messy caucuses on Monday night.

In Washington, Trump’s team has already pivoted from the trial to the policy wins he’ll need in his re-election campaign. That includes a push for new legislation to reduce drug prices and improve medical billing, as well as finding ways to punish so-called “sanctuary cities” that give benefits to immigrants in the country illegally. He’s pressing his senior military and homeland security officials to build more miles of wall by late August when the Republican National Convention kicks off in Charlotte, N.C. “He’s going to be on the road a ton, a ton,” says the White House official.

Democrats gambled that by drawing attention to Trump’s abuse of power they’d make the case, if not for removing him from office, then at least for voting him out in November. Overall, Trump’s approval rating has moved only in small degrees since the impeachment process began, with most Americans only becoming more entrenched in their love or disdain for Trump as the drama played out in Washington.

If anything, the likely acquittal seems to have offered a modest boost for Trump: Results of Gallup polling released Feb. 4 showed Trump’s approval rating ticking up to 49 percent — his highest since taking office. Sixty-three percent of Americans now approve of how Trump is handling the economy, an increase of six points since November, Gallup found.

The same poll has shown a slight backlash against Democrats since impeachment began. The percentage of people holding positive opinions of Democrats dropped from 48 percent in September to 45 percent at the end of January.

Senate Minority Leader Chuck Schumer and Speaker Nancy Pelosi leave a press conference on lowering the price for healthcare in anticipation to President Trump's State of the Union address at the Capitol in Washington, D.C., Feb. 4, 2020.
Gabriella Demczuk for TIME

Veteran Democrats had warned that launching an impeachment came with a risk. But ultimately most Democrats felt the danger of Trump abusing the powers of his office to improve his reelection chances needed to be checked. “The experience of this impeachment process for the House as well as the Senate teaches that it is a time consuming, grueling, difficult, even painful process for everyone,” says Richard Blumenthal, a Democratic senator from Connecticut. “You just don’t begin impeachment because you disagree with the President.”

With Trump likely to be acquitted by the Senate on Wednesday afternoon, Trump’s campaign will continue to do what it can to extract a political price for Democrats’ wager.

“The Democrats have been exposed for pursuing the sham impeachment as a campaign tactic strictly to affect the 2020 election,” says Tim Murtaugh, director of communications for the Trump re-election campaign. Murtaugh says the Trump campaign will work to contrast Trump being “hard at work for all Americans” on national security, growing the economy and striking trade deals “while the Democrats have tried to prevent him from doing his job.”

Now it’s up to the President to decide how he wants to focus his energy for the next several months. Trump’s theme for his State of the Union address was the “Great American Comeback.” The speech could mark Trump’s comeback as well — but that may require him staying on script. 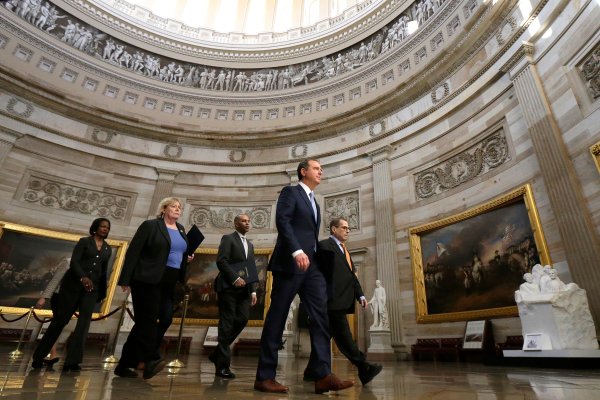 Trump’s Acquittal Would Be a Dangerous Transfer of Power From Congress to the President
Next Up: Editor's Pick