As Impeachment Vote Nears, House Democrats and Trump Defense Get a Last Chance to Make Their Case in Trial

With the outcome all but decided, House managers and President Donald Trump’s defense lawyers stood before the Senate for what will almost certainly be the final time at the impeachment trial on Monday, advancing two impassioned yet contradictory visions of the dangers facing American democracy.

Both sides’ arguments, coming just two days before Senators will finally vote on whether or not to remove the President from office, showed how the choice has essentially boiled down to one central question: is a U.S. president withholding aid to a foreign ally in order to get help with his own reelection effort a grave enough offense to warrant removal from office?

Impeachment managers prosecuting the case against Trump for the House not only say yes, but argue that failing to remove him will set a dangerous precedent that a president is above the law. The framers of the Constitution, the managers have repeatedly argued, devised impeachment as a bulwark against this precise abuse of power, and Congress must act accordingly, they say.

“If the Senate chooses to acquit under these circumstances, then America is in the wilderness,” Rep. Hakeem Jeffries said Monday.

On Friday, the House managers lost a key vote along a razor-thin margin on whether to introduce additional evidence into the trial. The motion was defeated 51-49, with only two Republican Senators voting in favor of allowing new documents and witnesses in the Senate trial. While last week’s presentations were largely about persuading Senators of the need for more evidence, the Democrats’ final arguments on Monday were focused on the broader implications Trump’s acquittal would pose for the country.

Rep. Val Demings warned of the “ongoing threat President Trump poses to our democratic system of government, both to our upcoming election that some suggest should be the arbiter of the President’s misconduct, and to the Constitution itself that we all swore to support and defend.” Demings laid out the evidence the House presented showing Trump had withheld military assistance to Ukraine to pressure that government to announce investigations into his political rival Joe Biden, and then obstructed Congress’s efforts to investigate his conduct.

And lead manager Rep. Adam Schiff appeared to cajole Senate Republicans who just four years earlier had been weary of the President for defending him now. “You can’t trust this President to do the right thing,” said Schiff. “Not for one minute, not for one election, not for the sake of our country. He will not change, and you know it.”

Republicans both on and off Capitol Hill acknowledged that Democrats had been effective in presenting their case. By the end of the trial, a few Republican Senators had even admitted that Trump’s conduct was less than ideal— something few of their counterparts in the House of Representatives had said during the inquiry— but so far none has publicly said his behavior warrants removal from office.

The weeks of debate prompted Republican Senators to wrestle with a new fundamental question. Which would be more dangerous to the country, removing Trump for what even many in his own party privately deem inappropriate dealings with Ukraine? Or leaving him in office and effectively exonerating him?

“I think he shouldn’t have done it. I think it was wrong,” retiring Tennessee Senator Lamar Alexander, who Democrats thought might break with his party on the evidence vote, said on Meet the Press on Sunday. “Inappropriate was the way I’d say— improper, crossing the line. And then the only question left is who decides what to do about that.” Ultimately, Alexander said he concluded that decision should be made by voters at the ballot box in November.

That was an argument that Trump’s defense hammered in their closing arguments, peppered with factual disputes about whether there was a quid pro quo and complaints about process. The voters should make the ultimate decision about Donald Trump, they said, not the Senate.

“At the end of the day, this is an effort to overturn the results of one election, and to interfere in the coming election that begins today in Iowa,” White House counsel Pat Cipollone said. Acquit President Trump, Cipollone asked the Senate, and “leave it to the voters to choose their President.”

Ken Starr, the former independent counsel during President Bill Clinton’s impeachment, argued that convicting Trump would be akin to saying: “Your vote in the last election is hereby declared null and void, and by the way, we’re not going to allow you, the American people, to sit in judgment on this President and his record in November.”

“That is neither freedom, nor is it justice,” Starr said. “It’s certainly not consistent with the most basic freedom of ‘We the People’: the freedom to vote.”

One of the most striking aspects of Monday’s closing arguments was how much fatigue had settled into the chamber. With Wednesday’s vote largely preordained, and the first votes in the 2020 presidential primary just a few hours away in Iowa, lawmakers seemed to be eager to put this episode behind them. Although the trial started two hours earlier than usual, it was the first time since it began that Senate Democrats did not hold a formal press conference before the proceedings. The Senate basement was mostly empty of lawmakers during breaks in the closing arguments, who just days earlier had lined up behind each other for their turn to spin reporters on the trial’s developments.

While Trump is nearly certain to be acquitted later this week, it remains to be seen whether twelve days of arguments and evidence will have convinced any Senators to break with their parties in the final vote. Several moderate senators on both sides of the aisle— Alabama’s Doug Jones, Arizona’s Kyrsten Sinema and West Virginia’s Joe Manchin for the Democrats and Alaska’s Lisa Murkowski, Maine’s Susan Collins and Utah’s Mitt Romney for the Republicans— have yet to indicate how they will vote.

Trump himself seems to be expecting a purely partisan outcome, which he will still undoubtedly frame as a personal vindication. “I hope Republicans & the American people realize that the totally partisan Impeachment Hoax is exacty [sic] that, a Hoax,” he tweeted during the House managers’ closing argument on Monday. “Nothing will ever satisfy the Do Nothing, Radical Left Dems!” 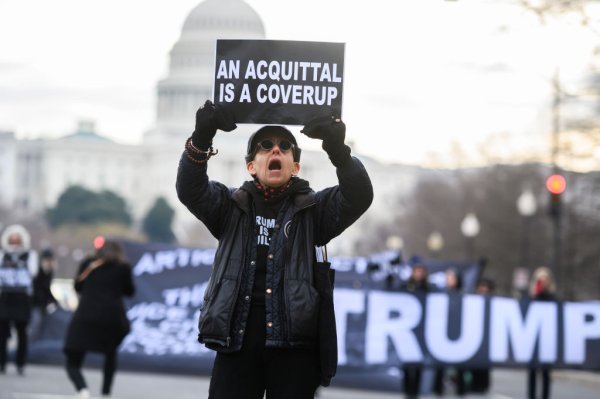