Iowans Aren't Thrilled About Joe Biden. But They May Be Ready to Settle For Him.

Like many Iowans, Roxanne Gusthaveson still isn’t sure whom she’ll caucus for next week. But her focus on finding a candidate who can beat President Donald Trump means that Joe Biden is probably her guy.

Gusthaveson has noted the former Vice President’s rhetorical meanderings, sees “the hiccup in his step” since he last sought the Democratic Party’s nomination in 2008, and would prefer if he and his family weren’t enmeshed in the ongoing impeachment drama in Washington. But she likes Biden, and suspects he’d be the strongest challenger against Trump.

“He might not win Iowa,” the 64-year-old retired city worker says as she waits for Biden to arrive at the University of Iowa’s student center on Jan. 27. “But we need someone different in the White House. And Joe Biden is probably the best shot to get that. Maybe.”

Supporters line up outside of a Joe Biden community event in Mason City, Iowa, Jan. 22, 2020.
September Dawn Bottoms for TIME

With the caucuses less than a week away, Biden is hoping that enough Iowans are like Gusthaveson: ready to vote with their heads, not their hearts. It’s not a bad bet. Most polls have shown that Democrats are more focused on defeating Trump than on finding a candidate they agree with ideologically. And Biden, who outperforms his rivals in hypothetical head-to-head matchups against Trump, is viewed by many as the Democrat with the best chance in November.

In the final sprint before the caucuses, Biden’s advisers are consistently making his electability their closing argument.

“This election isn’t about me and what I want,” says former Iowa First Lady Christie Vilsack, a longtime Biden friend and an adviser to his campaign. “The candidate I choose can’t just be who I want and agree with philosophically or the person I like—although I’m certainly choosing that way.” Instead, she says, Iowa Democrats need to consider which of the options can win Republican votes this fall.

Where Sen. Bernie Sanders is preaching a revolution and Sen. Elizabeth Warren is promising to take the fight to entrenched special interests, Biden is offering a simpler sales pitch.

“We have to beat him,” intones one recent Biden campaign ad that lingers on polling figures showing Biden leading Trump in recent head-to-head matchups. “Joe Biden is the strongest candidate to do it. He beats Trump by the most nationally and in the states we have to win. This is no time to take a risk.”

At Biden’s events, there’s evidence the argument is breaking through.

“Bernie has really good policy, but he can’t beat Trump,” says 17-year-old Will Haddy, a high-schooler from Iowa City who under Iowa rules can participate next week because he’ll be a voter on November’s Election Day. “Joe is boring when it comes to policy, but he can win.”

To be sure, Biden has die-hard fans like Debi Wakeland, a 67-year-old from Blue Grass who attended Biden’s Jan. 28 meet-and-greet in a Hungarian bar in Davenport. They’re the ones who get to his rallies early and don’t mind when he’s running late. “He knows what he’s doing,” Wakeland says.

But to win, the campaign is also counting on caucus-goers who aren’t necessarily thrilled with Biden yet see him as the best shot at toppling Trump.

“It’s one of those moments like when [Ronald] Reagan ran against [Jimmy] Carter. We had to vote for the lesser of two evils. Then, the lesser was Reagan. Now, it’s Biden,” says Ed Voelpel, a 76-year-old retiree who waited for Biden to arrive at a Jan. 28 event on the banks of Mississippi River in Muscatine.

“I’d rather have Bernie,” says 52-year-old math professor Jim Cochran, “but we have to beat Trump.”

Not exactly a ringing endorsement. But Biden will take it. 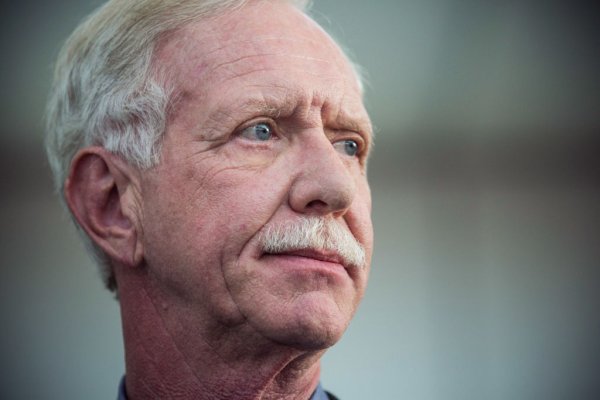