The number of people infected with a SARS-like form of coronavirus in Wuhan, China could already be more than 30 times higher the the official tally, researchers in Hong Kong have warned.

Gabriel Leung, the chair of public health medicine at the University of Hong Kong, said at a press conference Monday that his team’s research models show that some 44,000 people in Wuhan alone—where the virus is believed to have originated in a seafood market—may be infected as of last Saturday.

Chinese officials have shut down travel in and out of Wuhan and many surrounding cities in an effort to stop the spread of the virus. Fewer than 2,800 cases of the virus, dubbed 2019-nCoV, have been officially confirmed in mainland China so far, according to a virus tracker maintained by researchers at Johns Hopkins University, which uses numbers from China’s National Health Commission and DXY.cn, an online medical professional network. About 1,400 of those are in Hubei province, where Wuhan is located—a fraction of the total estimated by Leung’s team.

The virus has killed 80 people in China and spread to at least 10 countries, including the U.S.

Other estimates by researchers who have modeled the spread of the infection—including a team at Imperial College London—have also suggested infections are many times higher than official numbers. Chinese officials have pushed back on such estimates: “Faced with viruses like this, facts must be facts and theories are just theories,” Gao Fu, the director of China’s Bureau of Disease Prevention and Control, told reporters on Jan. 23.

Leung said his model suggests that 25,000 people were likely showing symptoms of the illness as of Saturday. The remainder would be pre-symptomatic.

Leung recommended that officials take “substantial draconian measures” to limit the spread of the virus, including cancelling large gatherings, closing schools and asking office workers to work from home. Without those steps, be believes, the number of people infected could double every six days.

Chinese officials have already extended the Chinese New Year holiday, restricted travel to and from cities at the heart of the outbreak—affecting tens of millions of people—and canceled entrance exams for schools and universities.

The mainland could also see “epicenters of self-sustaining epidemics” in the cities of Chongqing, Beijing, Shanghai, Guangzhou and Shenzhen, Leung said.

“Chongqing is expected to have the largest epidemic,” he said, thanks to the city’s large population and close transport ties with Wuhan.

The outbreak could peak around April or May in major cities, according to Leung’s model.

Leung said that his research had been sent to Hong Kong and Beijing authorities and the World Health Organization, which on Jan. 24 said that the outbreak is a domestic health emergency in China, but does not yet constitute a global health emergency.

He warned officials across the world to prepare for the worst.

“We have to be prepared that this particular epidemic may be about to become a global epidemic,” Leung said. “This is not a certainty by any stretch of the imagination, but there is not insubstantial probability that this might happen.” 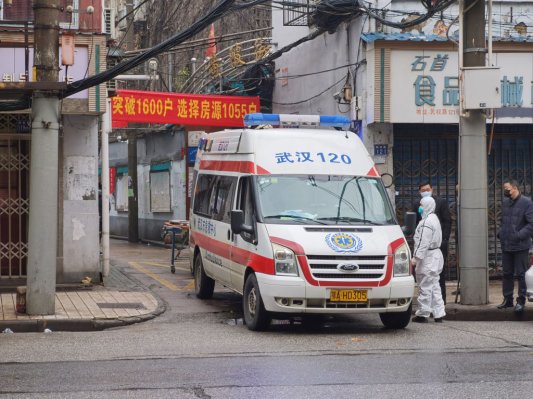 36-Year-Old Man Is Youngest to Die in China Virus Outbreak
Next Up: Editor's Pick