Nobody’s perfect, but Katy Keene comes pretty close. A lovely young New York native, she spends her days charming VIPs in the personal shopping department of a Bergdorf-esque institution called Lacy’s. By night, she’s a budding designer, banging out whimsical pink and red garments—dramatic capes, smart bouclé dresses, sequined wrap dresses—for herself and her friends on a sewing machine passed down from her mom and grandmother. She lives in a big, shabby-chic apartment with two other aspiring artists and parties at the same club where K.O. Kelly, the chiseled sweetheart who’s been her boyfriend since high school, works as a bouncer.

On paper, this all sounds kind of cloying. But breezy Riverdale spinoff Katy Keene, which premieres Feb. 6 on the CW, is essentially a fairy tale—and every fairy tale needs its princess. Thankfully, Lucy Hale (whose precocious poise made her a slightly odd fit as artsy high schooler Aria Montgomery in the long-running teen thriller Pretty Little Liars) makes an unusually appealing one. A stylized update of a World-War-II-era Archie Comics character, she’s also every idealized TV career woman rolled into one: Carrie Bradshaw without the empty philosophizing, Midge Maisel without the baggage, a Mary Richards for our time.

Oh, she faces her share of adversity, as a girl who grew up in some outdated fantasy of a working-class Lower East Side and is seeking her fortune in high fashion. (The show’s romantic vision of New York doesn’t always square with the real city in 2020, which—despite the inevitable nitpickers on social media—is fine.) Her jealous, snooty co-workers have it out for her. The boss (Katherine LaNasa) is a Prada-wearing devil who’s kept Katy in a lowly assistant position for years because she’s threatened by her underling’s competence. K.O. (Zane Holtz), who moonlights as a boxer, can’t set foot inside Lacy’s without causing a scene.

Yet Katy isn’t the only Cinderella in this story. Her roommate Jorge (Jonny Beauchamp of Penny Dreadful) has a drag alter ego, Ginger, and Broadway dreams but faces prejudice for his femme self-presentation in the musical theater world. New to their scrappy home is Riverdale transplant Josie (Ashleigh Murray), late of the Pussycats, who comes to the city to make music and immediately meets a helpful heartthrob with record-industry ties. Their pal Pepper (Julia Chan), a social butterfly with secrets who dreams of opening her own art space, feels somewhat out of place in Katy’s wide-eyed world. But her darker storyline is such soapy fun, it’s hard to care.

Each series in mega-producer Greg Berlanti and executive producer/co-showrunner Roberto Aguirre-Sacasa’s Archie Comics televisual universe (which also includes Netflix’s Chilling Adventures of Sabrina) combines retro aesthetics with constant pop-culture references, and Katy Keene is no different. Its escapist admixture is a little bit Fame, a little bit Valley of the Dolls and a little bit Felicity, with distinct “summer of scam” energy and lots of sing-along musical numbers, from Josie’s “You Can’t Hurry Love” to Ginger setting the club on fire with “Material Girl.” Less about finding Prince Charming than it is about making your artistic dreams come true without losing your soul, Katy Keene is a fairy tale fit for a new decade. 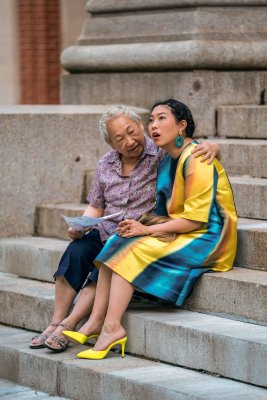 Lori Tan Chinn Is a Scene-Stealer in Awkwafina’s New Series. But the Role Comes After Decades of Harassment and Discrimination
Next Up: Editor's Pick