You might not be able to work out with Michelle Obama, but now you can now sweat to the same playlist she uses.

The former First Lady and physical activity advocate released a list of her favorite workout music on Instagram Sunday, writing that she wanted to give people “a little inspiration” now that “It’s about that time when New Year’s goals and resolutions get just a bit harder to stick to.”

“These songs always seem to give me that extra boost to get through my toughest workouts,” Obama wrote.

The playlist combines many upbeat tracks that would work well for a fast-paced work out, including many diverse musical genres, such as R&B, rap and AfroWave, a genre that blends rap and R&B with Jamaican and African musical traditions.

The playlist includes tracks by one of Obama’s longtime favorite artists: Beyoncé. The list includes Beyoncé’s solo song “Before I Let Go,” plus tracks by musical acts The Carters and Destiny’s Child.

Fittingly, Beyoncé not only sang at Barack Obama’s presidential inauguration, but also partnered with Michelle Obama on the “Let’s Move” campaign, which promoted physical activity and healthy eating to fight childhood obesity. Michelle has also been continually open about her own efforts to get exercise, releasing photos of herself at the gym and posting images about working out with friends.

Both well-known and rising artists are also represented on the playlist, including Lizzo’s “Soulmate,” Kirk Franklin’s “A God Like You” and Cardi B’s “Press.”

The list also includes cool down songs to play as you near the end of your workout, including “Godspeed” by Frank Ocean and “I Want You Around” by Snoh Aalegra.

If you’re looking for more, you can also check out former President Barack Obama’s annual list of music (as well as his favorite books and movies), which was released at the end of December. 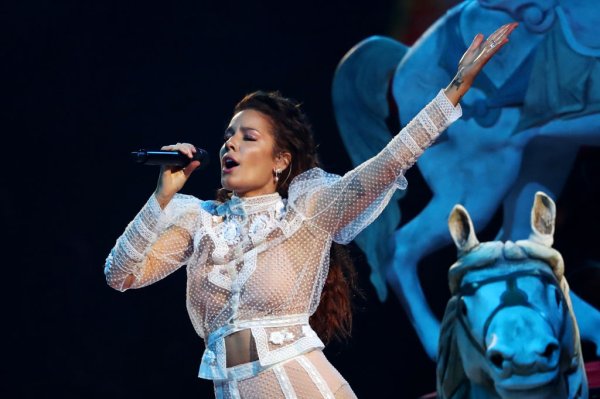 Best Songs of the Week, from Halsey to BTS's "Black Swan"
Next Up: Editor's Pick