After Retaliation, Iran’s 40-Year Conflict With U.S. Likely to Return to the Shadows

By Kimberly Dozier and John Walcott

Now that Tehran and Washington have openly exchanged fire, the conflict between the two nations will continue in the shadows where it has been fought for 40 years — and where Iran’s Revolutionary Guard still seeks to exact revenge for the U.S. killing its top commander.

But after the assassination of Qasem Soleimani, Iran now knows that any attack that even its proxies launch could trigger another American strike. President Donald Trump’s backers say the raised stakes have restored “big stick” deterrence that American enemies and allies had begun to doubt after Trump failed to respond militarily to repeated Iranian aggression. His critics say he has ushered in a new era that makes every American a target for kidnapping and assassination across the Middle East, and beyond.

Trump seemed satisfied on Wednesday that Tehran had learned its lesson, saying in a televised address that he was “ready to embrace peace with all who seek it,” after the overnight barrage of ballistic missiles fired harmlessly on U.S. bases in Iraq to avenge the U.S. drone strike that killed Soleimani.

Iran’s Supreme Leader Ayatollah Ali Khamenei called the strikes a slap in America’s face and reiterated that his long term goal remains the ouster of U.S. forces from the region. Chairman of the Joint Chiefs Mark Milley told reporters he believed the Iranians intended to kill, but a senior U.S. official said Iran warned Washington via a European embassy ahead of the strikes, speaking anonymously to describe sensitive briefings.

In addition, three U.S. officials said, the Iranians prepared for the strikes in ways that American spy satellites and electronic eavesdropping were sure to detect them — which U.S. intelligence did in time to give the White House and American forces some three hours warning of possible attacks and their probable targets.

Iraqis on Al Asad Air Base even got a visit from a U.S. military officer before the attack, telling them when and where the missiles would land, said Ali Alfoneh, a senior fellow at the Arab Gulf States Institute in Washington. “This provided both sides an opportunity to de-escalate the conflict,” Alfoneah said. “Both sides can declare victory and move forward.”

The State Department declined to comment on whether Iran had provided a heads-up before the strike, and the White House and defense officials did not immediately respond to requests for comment. Reuters reported that an Iranian army spokesman denied “foreign media reports” suggesting there was some kind of coordination between Iran and the United States before the attack to evacuate bases.

And while both nations appeared more than ready to walk back from the brink of war, the conditions on the ground remain as volatile as ever. American and Iranian-backed forces operate in close proximity at several flashpoints throughout the Middle East in places like Bahrain, Yemen, Syria and Iraq, where a miscalculation or surprise attack could raise tensions again.

The missile attack was a rare Iranian claim of responsibility that could be an attempt to distinguish it from retaliatory actions by its vast proxy network. Unable to combat the U.S. military head-on, Iran’s Islamic Revolutionary Guard Corps (IRGC) has spent decades organizing a constellation of Shi’ite militias across the tumultuous region. These proxy fighters, which are trained, supplied and funded by Tehran, give Iran an asymmetric advantage over the U.S. as well as plausible deniability for some attacks the groups carry out.

“We see this big public attack carried out by Iran, but that was a show of strength to send a signal and it also plays to their own domestic audience,” says Phillip Smyth, a Shi’ite Islamist militarism expert and senior fellow at the Washington Institute for Near East Policy. “Iran’s preferred method of operation is to pick a time and place of their choosing, using the proxies that they want, in order to have the most effective response.”

After all, it was not the Iranian military, but Iranian-backed forces — groups like Asab al-Haq and Kata’ib Hezbollah —that launched 11 rocket attacks against U.S. troops and personnel on Iraqi bases over the last two months, killing an American contractor and injuring four U.S. service members. The proxy groups were also responsible for the protests outside the U.S. embassy in Iraq.

The Trump Administration says both incidents pushed the U.S. toward the precipice of war — although some members of Congress who were briefed Wednesday on the decision to kill Soleimani said the Administration failed to support its claims that the strike was launched to prevent an “imminent” attack on American forces in Iraq.

Tehran doesn’t want to get into a conventional battle with the United States, says Afshin Molavi, a senior fellow at the Johns Hopkins University SAIS Foreign Policy Institute. “The Islamic Republic of Iran has for four decades demonstrated an extraordinary skill for survival,” he says. “They do not want war with the most powerful military on the planet.”

Indeed, the overriding concern of the clerical regime is holding onto power in the face of rising public discontent over official corruption and the daily hardships of economic sanctions. As a result, the Iranians may use time, distance, and proxies to keep their fingerprints off any future terrorist acts, two counterterrorism officials and a senior U.S. military official told TIME.

But Iran’s religious leader may be more patient than members of the IRGC, now led by Soleimani’s successor, Brig. Gen. Esmail Ghaani, which still wants to exact pain equal to their leader’s loss, the U.S. official who spoke about the strike warning said.

U.S. forces inside Iraq are at particular risk, officials say. American troops on Iraqi military bases remain on an elevated state of alert, bracing for a longer campaign that may follow, defense officials say. U.S. intelligence has intercepted an apparent Iranian “hit list” inside Iraq, listing American and other allied officials as key targets for kidnapping or assassination, a separate security source briefed on the threat told TIME. Attacks could also come in the form of rocket, artillery or small drone attacks on U.S. positions inside Iraqi military compounds, multiple U.S. officials say. Two rockets landed inside Baghdad’s Green Zone on Wednesday, one within a few hundred feet of the U.S. Embassy.

American troops and contractors in Iraq are also watching for the militia groups to take revenge for the killing of the deputy commander of Iraq’s Popular Mobilization Forces Abu Mahdi Al-Mohandes, who was killed in the same drone strike that killed Soleimani.

“The thing that worries us is what you saw at the Embassy,” said the security source, recalling the New Year’s Eve attack by militia groups that forced their way into the U.S. Embassy compound in Baghdad, angry over U.S. missile strikes on their bases. Just about every Iraqi base housing Americans has militia bases nearby, the source said. “If they come at these guys with 200-300 fighters, they could brute force their way in.”

In the wider region, the U.S. military and Gulf allies are on the lookout for more mysterious explosions that could, for example, cripple commercial shipping in the Gulf.

“The concern is that all militias are on standby to attack,” wherever U.S. troops are stationed, a senior congressional staffer said. Those attacks could be staged by groups of small, hard-to-combat commercial drones, technology provided by Iran. “There aren’t enough jammers or low-level air defenses to push back commercial unmanned aerial devices with improvised explosive devices,” the congressional staffer said. “And they could be dangerous to supporting (helicopters) as well.”

However, three U.S. officials said, an attack using drones would risk an American counterattack, perhaps on targets in Iran, because the drones have Iranian fingerprints “all over them.”

Defense Secretary Mark Esper told reporters Wednesday at the Pentagon that he fully expected Shi’a militias to continue to carry out attacks on U.S. forces in the Middle East. And, because Iran and its proxy forces are so tightly intertwined, he acknowledged the difficulties with discerning who launches attacks against U.S. forces and how to respond. “Our challenge will be to sort through that, to understand who’s doing it, who is motivating it,” Esper said, adding that the U.S. military must “react forcefully” to ensure the attacks don’t persist.

According to two U.S. counterterrorism officials, current U.S. and allied intelligence indicates that Iranian proxy groups in Iraq, Syria, Lebanon, Yemen, Bahrain, Saudi Arabia’s oil-rich Eastern Province, and as far afield as Afghanistan and Western Europe are preparing to act, perhaps with direction from Tehran, or in some cases independently.

“The chatter continues, the dark web is still buzzing, people are still active, and the weapons are all still there,” said the first official, declining to describe the intelligence in detail on Wednesday. “The fact that Soleimani is not (still alive) doesn’t change our calculations, and our people and our allies are still on high alert, and they probably will be for the foreseeable future.”

Multiple officials also said they were concerned about cyberwarfare, in particular a “combination blow” on an important U.S. government, financial, energy, or communications target facilitated by an insider planted by Iran or one of its allies. “All he, or better yet she, would have to do is click on a piece of malware,” a second U.S. military official said.

Republican Congressman Mike Waltz of Florida predicted Iran will return to covert war, with one key difference: “Do they attack Americans when this president has made it clear, ‘If we’re taking American casualties, whether they are your proxies or you, we’re holding you accountable?’ That’s how deterrence works.”

A reserve U.S. Army Green Beret and former Cheney staffer, Waltz was briefed on the intelligence that led Trump to order Soleimani’s killing, describing “an escalation on the part of Soleimani and his attention to use his proxies to attack and kill American assets and ongoing plotting and planning, with a window of time…in days and weeks not months.”

The greatest danger of escalation may not lie in Tehran, but in Washington, some U.S. officials say. If the Iranians are patient, strategic, and to some extent predictable, Trump is none of those things, they say. Chaos and unpredictability may have served him well in his business dealings, but it has left his subordinates in the military, the diplomatic corps, and the intelligence community — not to mention America’s allies — unsure how he might respond to the next terror attack.

—With reporting by W.J. Hennigan/Washington. 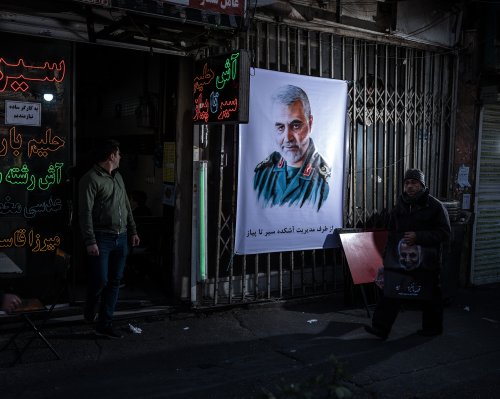 What Will Iran Do Next After Retaliatory Missile Strike?
Next Up: Editor's Pick