But as early reports emerged of no American casualties and limited damage, U.S. officials quickly concluded the attacks were more of a face-saving measure for Tehran than an escalation of hostilities. “The Iranians have left President Trump with an obvious off-ramp,” to mounting hostilities, a senior U.S. official told TIME Tuesday night.

“Iran took & concluded proportionate measures in self-defense,” Foreign Minister Javad Zarif announced on Twitter. “We do not seek escalation or war, but will defend ourselves against any aggression.”

As the Pentagon assessed the damage, U.S. officials who were not authorized to speak publicly on the matter, told TIME that no Americans were killed in the assault on Ain al-Asad air base in Anbar province and another military installation in Erbil, located in Iraq’s northern Kurdistan region.

“All is well! Missiles launched from Iran at two military bases located in Iraq. Assessment of casualties & damages taking place now,” President Donald Trump said on Twitter. “So far, so good! We have the most powerful and well equipped military anywhere in the world, by far! I will be making a statement tomorrow morning.”

If both sides appear to have concluded, at least for the moment, that starting a full-blown war was a bad idea, the fallout from the Soleimani strike is still roiling the Pentagon, America’s allies and the region. American forces in the Middle East and around the world remain on high alert, and U.S. and allied intelligence officials warn that terrorist groups and individuals with no ties to the Iranian regime may act on their own.

James Clapper, a former Director of National Intelligence, said the Iranians had three audiences in carrying out the missile strike: their own public, the U.S. and the Iraqis. “Zarif’s statement was very temperate, and implies they have ‘concluded’ their retaliation,” he said. “We may well have dodged a bullet, if Trump can contain himself.”

The Trump Administration on Friday urged all American citizens to leave Iraq “immediately.” The counter-ISIS battle, which is largely run out of Iraq, has been halted indefinitely. And 3,500 additional soldiers have arrived in the region on snap deployment orders, joining the 15,000 American troops sent to the Middle East since the situation with Iran began to deteriorate last spring.

“On almost a daily basis, the military has had to react to the President’s decisions, rather than plan for them,” says Chuck Hagel, a former U.S. Defense Secretary and Republican Senator from Nebraska. “It could come in an off-the-cuff comment or Twitter or in an emotional outburst. It’s a dangerously dysfunctional way of doing business that opens the door to unintended consequences.”

Tensions between Washington and Tehran have been building since the Trump Administration walked away from the landmark 2015 nuclear deal and began levying crippling economic sanctions more than a year ago. It remains unclear what the lasting price of the latest confrontations with Iran will be for the U.S.

NATO allies Germany and Canada have begun to draw down forces from central Iraq out of concern of the volatility in the region.

At the same time, confusion has deepened over the future of American forces in the country, after Iraqi Prime Minister Adel Abdel Mahdi requested the U.S. military to clarify how a letter stating the U.S. was preparing to withdraw troops was mistakenly sent to his office.

The unsigned letter, which the Pentagon claims was sent in error, surfaced online just one day after Iraq’s parliament made a non-binding vote to expel all foreign forces from the country. Mahdi said during a televised cabinet meeting the letter looked official to him. “It’s not a piece of paper that fell off the printer or reached us by coincidence,” he said, adding that it was translated in Arabic and English.

The White House and Pentagon have yet to explain how a “draft” of the unsigned letter from Marine Brigadier General William Seely, who commands the U.S.-led military coalition against ISIS in Baghdad, was sent out. Defense Department officials were left scrambling in the halls of the Pentagon for more than 90 minutes as journalists sought an explanation on the letter after it was published Monday by the Reuters and AFP wire services.

Even Defense Secretary Mark Esper and Joint Chiefs of Staff Chairman Gen. Mark Milley couldn’t answer whether the letter was authentic and, if it was, what it meant. “I don’t know what it is,” Esper said Monday during a hastily planned press briefing, referring to the letter. “We’re trying to find out where that’s coming from, what that is.” About five minutes after the briefing concluded, Milley made a phone call and returned to tell reporters: “That letter is a draft, it was a mistake, it was unsigned, it should never have been released.”

The pair emphasized that no American forces would be leaving Iraq, in fact just the opposite. About 3,000 paratroopers from the 82nd Airborne Division packed up their weapons and equipment and said goodbye to their family members at Fort Bragg in North Carolina for a snap deployment to Kuwait to help deal with hostilities.

In the city of Fayetteville, where many of the soldiers’ families live, the community was settling into the uneasy routine of awaiting their safe return, says Mayor Mitch Colvin. Yellow ribbons went up around town and local churches put up messages calling for prayers on marquees. “Unfortunately, this is something that we, as a community, have grown accustomed to over the past 20 years,” he says. “It’s never easy. We all see what’s going on in the news. We just pray that this deployment is quick and that all our brave soldiers come home safe.”

—With reporting by Kim Dozier and John Walcott/Washington 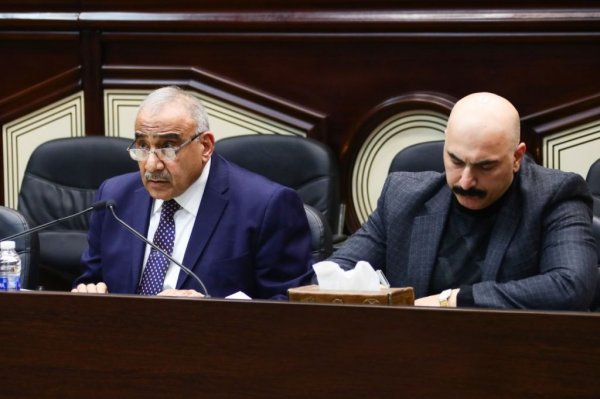