When Donald Trump ordered the death of Iranian general Qasem Soleimani, he played perhaps his strongest card in a weak strategic hand. He placed a bold bet that his strike would brush back the Iranian regime, place it on its heels, and deter future attacks. It’s a bet that he might lose (with terrible consequences), but it’s far too soon to judge the outcome.

But first, let me disclose my relevant bias. I felt a sense of real relief when I heard of Soleimani’s demise. I served in Iraq, during The Surge (President George W. Bush’s increased deployment of U.S. forces to try to stabilize the country starting in 2007), and my forward operating base was located less than two dozen miles from the Iranian border, in a mixed Sunni-Shiite part of Diyala Province. While the precursor to ISIS (then called the Islamic Caliphate in Iraq) was our principal foe, we were constantly worried about the presence of Shiite militias armed with a deadly Iranian-supplied weapon, the explosively-formed-penetrator, or EFP.

The EFP could shred our up-armored Humvees. It could punch through the armor of our Bradley infantry fighting vehicles, and – properly-aimed – it could even penetrate the armor of the Abrams main battle tank.

For much of our deployment, the Shiite militias were quiet – except during a terrible series of weeks in the spring of 2008. They rose up, they deployed their EFPs, and they destroyed one of our Humvees, killing two men I knew. For days on end, until we took our own decisive actions, we were concerned that even the main supply route into our base could be cut. We felt isolated and vulnerable.

Talk to Iraq veterans, and you’ll hear countless variations of stories like this. Forces under Soleimani’s command and control conducted direct strikes against the United States, they supplied weapons to proxy forces, and they took a terrible toll in American lives. Soleimani himself once famously bragged via text message to General David Petraeus, then the allied commander in Iraq, that “you should know that I, Qassem Soleimani, control the policy for Iran with respect to Iraq, Lebanon, Gaza, and Afghanistan. And indeed, the ambassador in Baghdad is a Quds Force member. The individual who’s going to replace him is a Quds Force member.”

Soleimani’s influence and power had only grown in the years since my deployment. In 2013, the New Yorker’s Dexter Filkins wrote perhaps the definitive profile of the Iranian general. Soleimani, he said, “has sought to reshape the Middle East in Iran’s favor, working as a power broker and as a military force: assassinating rivals, arming allies, and, for most of a decade, directing a network of militant groups that killed hundreds of Americans in Iraq.”

In other words, he was no ordinary foreign general. He was an active enemy combatant commander working closely with other American enemies, and when the Shiite militias under his influence (and probable outright control) again in December attacked Americans in Iraq and besieged the American embassy in Baghdad, it was clear that he was still a threat.

So there was ample military cause for striking Soleimani. There was also sufficient legal justification. It is a basic aspect of the law of armed conflict that opposing commanders are a legitimate target. Soleimani had entered a theater of armed conflict not as a diplomatic guest of the Iraqi government, but rather as a co-belligerent with Shiite militias — the very militias that had attacked an American base and killed an American contractor and had days before attacked and burned part of the American embassy.

But to say that the strike was militarily and legally justifiable does not necessarily make it wise. Both the Trump administration and the Iranian regime are approaching the crisis from a position of relative strategic weakness. While the U.S. military is unquestionably the dominant military force in the world, it has deployed a fraction of the combat power to the Middle East than was present during the height of the Iraq War, and the American people have little appetite for a new war with an adversary far more deadly and capable than Saddam Hussein’s Iraq. Moreover, Trump himself is rightfully deeply-distrusted by a majority of the American people (constant lying has consequences) and justifiably seen as erratic and impulsive.

At the same time, however, the Iranians face their own substantial challenges. The regime is in economic distress as a result of crippling American sanctions, it has faced serious internal protests, and there are signs that Iraqis have grown weary of Iranian influence. Iraq has been convulsed by anti-Iran protests that have left hundreds dead. In short, neither party is in any condition to ignite a new conflict.

Yet history is replete with examples of unwilling nations stumbling into open war. Much depends on what Iran chooses to do next. There is a chance that Iran will see that it has pushed the United States too far, that it provoked and taunted the American president into delivering a blow that actually hurt the Islamic Republic.

Under this scenario, Iran doesn’t end its enmity and opposition to the U.S., but it does at least temporarily de-escalate. There is some historical precedent for this hope. After the Reagan administration’s sank several ships in the Iranian navy in Operation Praying Mantis in 1988, Iran reduced attacks on neutral shipping in the gulf, providing the United States with a temporary victory. If Iran does stand down its escalations, even if only for a time, Trump’s gamble will have paid off. The strike on Soleimani will have deterred Iran more than it provoked Iran.

But don’t think a pause – or even a de-escalation – means peace. After Praying Mantis, Iran continued to aid anti-American terrorists, and in 1996 it struck America again, bombing the Khobar Towers military complex in Saudi Arabia and killing 19 American service members.

A pause is possible, but it’s optimistic to call it likely. Iran could well respond to Trump’s gamble with a gamble of its own – hitting back, hard, at America or its allies to take advantage of relative American military weakness and profound American division in the hopes of consolidating support at home and pushing the American people past the point of tolerating yet another Middle East conflict.

There’s also the potential of a renewed Shiite insurgent campaign against American forces, an insurgency that’s not entirely under Iranian control. In fact, that’s the scenario that may well present the Trump administration with its worst challenge – a shadowy enemy, a slow increase in casualties, and a renewal of America’s least-popular recent war.

It’s clear that Trump is concerned about Iranian reprisals. On Saturday evening, he tweeted a threat to strike 52 Iranian sites, including sites important to “Iranian culture,” if Iran retaliates against Americans or American assets. Attacks on culturally-significant sites (absent military necessity, such as their use by opposing military forces) would represent a war crime under international law.

Trump’s tweet thus highlights a central concern going forward – at a time of great risk, the United States needs a steady hand at the helm. It needs a president who possesses strategic vision and exhibits tactical agility. Americans have no reason to believe that Donald Trump is such a man.

The future is uncertain, and we may not know the ultimate wisdom of Trump’s action for months (or perhaps years), but one thing is clear – as he fills Twitter with bluster and reinforces vulnerable American troops in the Persian Gulf region – yet another American president has learned that a promise to end American entanglement in the Middle East is far more easily made than kept. 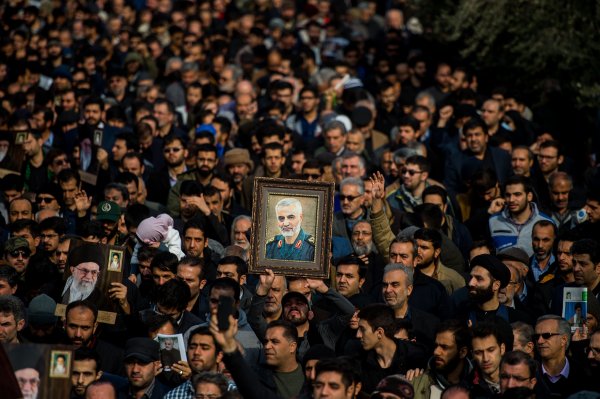 A 'Forever War' With Iran Is Unlikely. But More Death and Violence Seems Inevitable
Next Up: Editor's Pick