The assassination of top Iranian general Qasem Soleimani in Baghdad early Friday morning, in a U.S. airstrike authorized by President Trump, has led to markedly different responses from American allies around the world.

On one side, the U.S.’s European allies gave their qualified support to the strike that killed Soleimani, but immediately urged restraint from both countries in the hopes of avoiding a wider conflagration.

Britain and France led the chorus urging de-escalation. “We have always recognized the aggressive threat posed by the Iranian Quds Force led by Qasem Soleimani,” said British foreign secretary Dominic Raab in a statement. “Following his death, we urge all parties to de-escalate. Further conflict is in none of our interests.”

And while acknowledging “a whole series of military provocations for which Iran bears responsibility,” a spokesperson for Germany’s government flagged a “dangerous escalation point” in the U.S.-Iran conflict in a statement via The Associated Press, and added that “what matters now is contributing with prudence and restraint to de-escalation.”

U.S. Secretary of State Mike Pompeo spoke to European allies Friday, and said on Twitter that the U.S. “remains committed to de-escalation.”

Read more: Why the U.S. Assassination of Iranian Quds Force Leader Qasem Soleimani Has the U.S. Bracing for Retaliation

Over in the Middle East, however, Israel and Saudi Arabia, the U.S.’s most powerful allies in the region, were expected to capitalize on the blow to their joint adversary Iran. Soleimani was the powerful leader of the Quds Force, the foreign wing of the Iranian Revolutionary Guard Corps, which is behind Iranian proxy militias across the Middle East, arching from Lebanon, through Iraq and Syria, down to Yemen.

Saudi Crown Prince Mohammed bin Salman did not immediately respond to the Soleimani’s death, however according to reports last year, his top aides had previously discussed plans to assassinate the Iranian general. “Behind the scenes, I expect people like [bin Salman] will all be encouraging Trump to continue with this and hope he strikes Iran again and again,” says David Patrikarakos, author of the book Nuclear Iran. “The Saudis would love to see an escalation to this.”

Over in Israel, embattled Prime Minister Benjamin Netanyahu welcomed Soleimani’s death, cutting short a planned trip to Greece. “President Trump deserves all the credit for acting swiftly, forcefully and decisively,” Netanyahu told reporters before boarding a plane back to Jerusalem. “Israel stands with the United States in its righteous struggle for peace, security and self-defense.”

But Netanyahu also reportedly instructed his ministers not to discuss Soleimani’s death publicly. That could be out of fear of retaliation; the Quds Force and Iran-backed militias in Syria are already engaged in a proxy war with Israel. In Lebanon, Iran’s proxy Hezbollah has more than 100,000 rockets capable of hitting the whole of Israel.

“This is great news for the Israelis,” says Patrikarakos. “Unless, of course, Hezbollah starts launching missiles into Israel.”

Still, barring full regime change, Netanyahu would prefer to see the U.S. coax Iran into giving up its nuclear weapons program and ending its proxy wars in the Middle East, as opposed to all-out war, according to Ofer Zalzberg, a senior analyst at the International Crisis Group, an NGO that monitors and works to prevent conflict globally. “Netanyahu fears this incident lacks a broader U.S. strategy and would either merely escalate dynamics without restraining Iran’s nuclear program and regional activities, or that it would even boomerang, notably with U.S. withdrawal from Iraq,” Zalzberg tells TIME.

Amid the delicate balance, everybody is now watching to see what Iran does next. “Iran simply has to respond,” says Patrikarakos. “It can’t do nothing, because Soleimani was the literal face of Iran in the Middle East. You’ve got the entire Arab Sunni Middle East looking at you now, and if you do nothing, what happens to your deterrence capability?”

“It’s a very precarious situation, because we don’t know about the law of unintended consequences.” 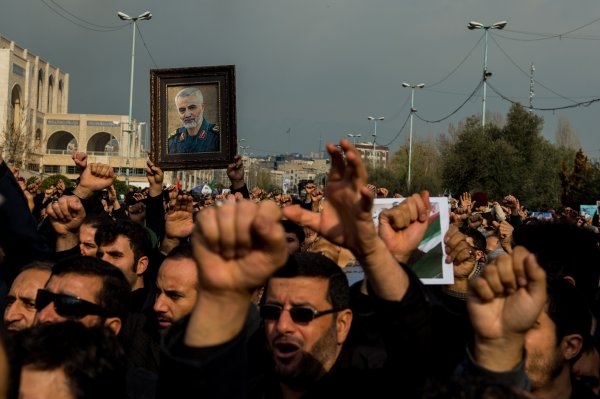