Australia’s Prime Minister Scott Morrison cut short his family vacation in Hawaii Friday and apologized after two firefighters were killed battling bushfires that have continued to spread across the country.

“I deeply regret any [offense] caused to any of the many Australians affected by the terrible bushfires by my taking leave with family at this time,” he said in a statement.

Geoffrey Keaton, 32, and 36-year-old Andrew O’Dwyer were en route to fight a fire when a tree fell on their truck, which then rolled off the road, reports the Associated Press.

Firefighters are battling more than 100 fires across New South Wales, where Sydney is located, according to the state’s Rural Fire Service, and a ‘Catastrophic Fire Danger’ alert has been issued for the weekend for parts of the country due to hot, windy conditions.

Protesters gathered outside Morrison’s office on Thursday demanding urgent action on climate change, according to the Associated Press. Others criticized the timing of his vacation.

“I have been receiving regular updates on the bushfires disaster as well as the status of the search for and treatment of the victims of the White Island tragedy,” Morrison said, referring to the volcanic eruption on a New Zealand tourist island that killed at least on Australian citizen.

He said that given the “the most recent tragic events” he would be “returning to Sydney as soon as can be arranged.”

In a separate statement, Morrison expressed his condolences to the families of the firefighters who died on Thursday.

“Their sacrifice and service saving lives and saving properties will be forever remembered,” he said.

The country experienced its hottest day on record this week, and authorities in New South Wales declared a state of emergency on Thursday over the ongoing fires. 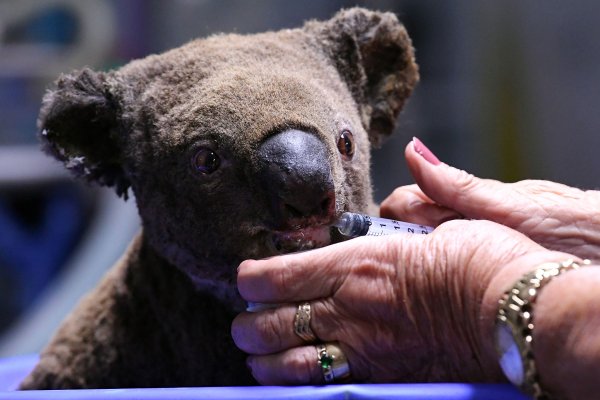 Koalas Were Already on the Brink in Australia. Bushfires Have Killed 1,000 in 2 Months, Experts Say
Next Up: Editor's Pick