The Trump Administration on Jan. 2 announced that it will remove some—but not all—flavored e-cigarette products from the U.S. market, in a compromise that has sparked criticism from both vaping advocates and adversaries.

The new plan applies to the cartridge-based e-cigarette products made by companies like Juul Labs, which are particularly popular among teenagers. Under the policy, companies will be prohibited from selling e-liquids in fruit, dessert and mint flavors, leaving only menthol and tobacco products on the market.

Larger, tank-style e-cigarettes—which users can manually fill with e-liquids of their choice, and are primarily sold in age-restricted vape shops—would be exempt.

Federal officials have been scrambling to regulate the e-cigarette industry in light of a spate of vaping-related illnesses and a continuing epidemic of underage use. The U.S. Centers for Disease Control and Prevention estimates that 5.4 million middle and high school students used e-cigarettes in 2019. Research suggests underage users are most likely to use fruit- and mint-flavored products.

The policy, which follows a newly signed law that raises the legal purchasing age for tobacco and vaping products to 21, is less drastic than a plan President Donald Trump announced in September 2019. At that time, Trump said his administration would remove all flavored vaping products, including menthol, from the market until they received clearance from the Food and Drug Administration (FDA).

Alex Azar, secretary of the Department of Health and Human Services, said in a Jan. 2 statement that the new plan balances the agency’s need to keep teenagers away from nicotine, while preserving options for adult smokers who use e-cigarettes to quit. “By prioritizing enforcement against the products that are most widely used by children, our action today seeks to strike the right public health balance by maintaining e-cigarettes as a potential off-ramp for adults using combustible tobacco while ensuring these products don’t provide an on-ramp to nicotine addiction for our youth,” he said.

But that compromise has left neither public-health groups—which have argued for an all-out ban on flavored products—nor vaping industry groups—which fervently oppose such a ban—entirely happy.

“The FDA’s decision to abandon its announced plan to clear the marketplace of all flavored e-cigarettes, including menthol, is unconscionable,” American Cancer Society CEO Gary Reedy said in a statement provided to TIME. “Instead of moving forward with an effective proposal that could have a meaningful effect in curbing the youth e-cigarette epidemic, we once again have a hollowed-out policy that will allow the tobacco industry to continue to attract kids to a lifetime of nicotine addiction.”

Meanwhile, vaping industry groups continue to argue that removing flavors from the market may push some adult vapers back to combustible tobacco products, and put jobs and small businesses at risk. A Vapor Technology Association report from November 2019 estimated that a total flavor ban would have resulted in 150,000 lost jobs and $8.4 billion in lost sales.

The conservative advocacy group Americans for Tax Reform, in a statement provided to TIME, called Trump’s new policy “a compromise but not a complete victory.” Paul Blair, the group’s director of strategic initiatives, praised the exemption for tank-style vapes, but said “the unfortunate reality, however, is that removing so many disposable and closed system vapor products from the market is that the very places where these reduced risk products were once available is where smokers can still buy any cigarette that they want.”

Juul has already stopped selling its mint, fruit and dessert flavors. A spokesperson said in a statement provided to TIME that the company “refrained from lobbying the Administration on its draft flavor guidance and pledged to support the final policy. We fully understand the urgent need to continue resetting the vapor category and earn trust as we combat underage use and convert adult smokers from combustible cigarettes.”

Other brands selling cartridge-based products, such as Vuse, still offer flavored products. Manufacturers have 30 days to comply with the policy before risking penalty from the FDA.

In addition, makers of all e-cigarette products that were on the market by 2016 have until May 2020 to apply for FDA authorization. If companies can prove that their flavored products are appropriate for the protection of public health and secure FDA authorization, they may return to the market—a possibility that Trump said he would welcome.

“Hopefully, if everything’s safe, they’re going to be going very quickly back onto the market,” he told reporters. 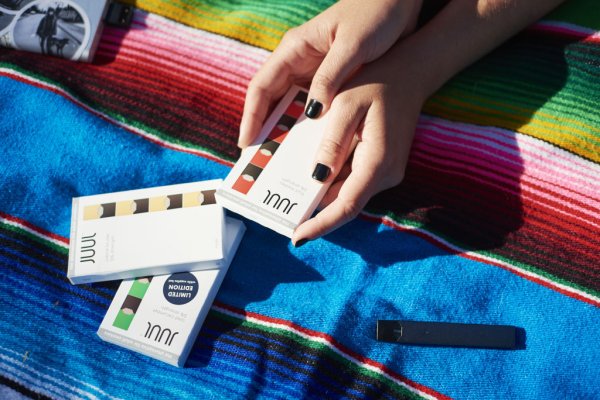