The Federal Legal Age to Buy Tobacco Products Has Been Raised to 21. Here’s What That Could Do to the Vaping Industry

The federal legal age for purchasing tobacco products has been increased from 18 to 21 in a move the American Lung Association said will “reduce youth access to tobacco products and help save lives.”

That provision, part of a $1.4 trillion spending bill which President Donald Trump signed into law on Friday, would apply not only to traditional tobacco products such as cigarettes and cigars, but also to e-cigarettes—products that have lately been caught in regulatory cross-hairs, sparked by rising rates of use among teenagers. According to the latest federal data, 27.5% of high school students reported using e-cigarettes during the past month. Raising the legal age of purchase is meant in part to curb that trend by preventing teenagers from buying vaping products, either for personal use or to distribute to younger classmates.

So-called “Tobacco 21” legislation has already been implemented in almost 20 states as well as numerous cities across the country. The new legislation, which will take effect in the summer of 2020, would make 21 the mandatory minimum age of purchase for all states. Tobacco 21 is the rare policy supported by both public-health groups and pro-vaping advocates, although the latter’s support sometimes raises eyebrows among the former. Public health officials support it on the premise that it would theoretically keep tobacco products away from young people—which is especially important since most smokers start before they’re 21. In a statement provided to TIME, the American Lung Association called it an “easy way to protect children’s health and prevent future generations from getting hooked on nicotine.”

Vaping advocates, meanwhile, support Tobacco 21 for several reasons. Tony Abboud, executive director of the trade group Vapor Technology Association, said in a statement provided to TIME that Tobacco 21 is “the most significant step that can be taken to reduce youth access and use.” By keeping nicotine products away from young users, for whom they are not intended, Tobacco 21 could also ease some of the hysteria around teen vaping. Further, it could preempt more dramatic proposals, like the all-out ban on flavored vaping products that Trump teased this fall—and then abandoned in favor of Tobacco 21.

Longer-term, it brings much-needed regulation to an industry that has proliferated largely unchecked. E-cigarettes were not regulated by the Food and Drug Administration (FDA) until 2016, so any brand for sale before then entered the market without agency approval. By the time the FDA started cracking down on vaping companies for their marketing or for producing kid-friendly flavors like cotton candy around 2018, an underage-use epidemic had already started. Reigning in the wild west of the vaping industry through legislation like Tobacco 21 could enhance the industry’s legitimacy and give it a better shot at surviving when the FDA decides next spring whether to pull e-cigarettes off the market entirely.

Of course, losing an undeniably lucrative customer base—teenagers—will have some negative effect on vaping companies’ bottom lines. But David Levy, who researches the science and business of e-cigarettes at Georgetown University, says companies will likely come out fairly unscathed. “While sales would be reduced, firms selling vaping devices and liquids will probably indirectly benefit, because regulations will be less strict due to less concern about youth vaping,” Levy says.

The policy could also have an outsized benefit for companies like market-leader Juul Labs, and large competitors like Vuse. Juul, a lucrative startup backed by Big Tobacco firm Altria and valued at around $16 billion, can survive the hit that will come from shrinking its pool of legal buyers; Vuse, though less dominant, is also owned by a deep-pocketed Big Tobacco giant, R.J. Reynolds. But small mom-and-pop operations may not be able to, and some could fold. If they do, that means more market share available for the taking for Juul—which, even now, controls up to 70% of the U.S. market.

But the entire vapor industry, Juul included, has been struggling as vaping comes under greater scrutiny, thanks in part to a Congressional investigation and a vaping-related lung disease outbreak (mostly tied to THC, not nicotine). Juul’s valuation, while still massive, has fallen drastically since it peaked at $38 billion this time last year, and the company has been forced to navigate a steady stream of lawsuits and PR battles. (Juul did not respond to TIME’s request for comment.)

With FDA approval applications due in about six months and the federal government stepping in to regulate, the fate of the industry is far from decided. 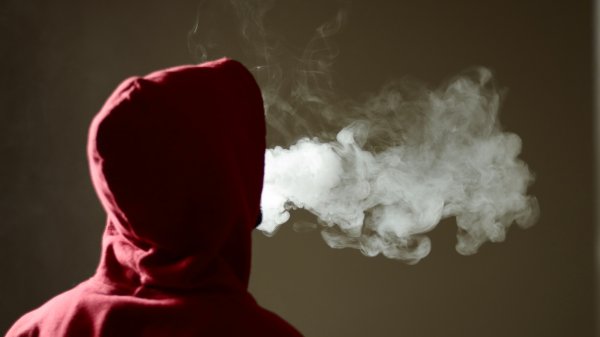 U.S. Teens Aren't Just Vaping Nicotine. Marijuana Use Is Also on the Rise
Next Up: Editor's Pick