Prince William has announced a multi-million pound prize for “visionaries” working to solve “Earth’s greatest environmental problems,” from climate change to air pollution. The Earthshot Prize will be awarded to five winners, every year, for the next 10 years. The initiative’s goal is to provide “at least 50 solutions to the world’s greatest problems by 2030.”

The prize was designed by and will initially be handled by the Royal Foundation of the Duke and Duchess of Cambridge — headed by Prince William and Kate Middleton. More than 60 organizations and experts were consulted in the process; in time, the Earthshot Prize will likely become an independent organization that continues to involve environmental NGOs, according to a press release from Kensington Palace.

This year, the initiative will debut a series of “Earthshot challenges,” according to its website, with a goal of “[seeking] answers to the biggest issues currently facing the planet, including: climate and energy, nature and biodiversity, oceans, air pollution and fresh water.”

The prize aims to encourage transformative environmental solutions — especially for communities most vulnerable to the negative effects of climate change. Earthshot Prize winners will involve a significant cash-prize, as well as public recognition at an annual ceremony. Submissions will be accepted from “individuals, teams or collaborations — scientists, activists, economists, leaders, governments, banks, businesses, cities, and countries,” the press release notes, with a goal of sparking a global movement by inspiring “collaborative projects that would not otherwise have been pursued.”

In a statement, Prince William said that humanity now faces a “stark choice” between maintaining the status quo — which, he argues, will “irreparably” damage the planet — or cultivating innovative solutions. “The next ten years present us with one of our greatest tests, William said, framing the Earthshot Prize as part of “a decade of action to repair the earth.”

The prize is inspired by the concept of moonshots — a phrase first coined in the aftermath of the 1969 lunar landing to refer to pioneering projects and initiatives. “Just as the moonshot that John F. Kennedy proposed in the 1960s catalyzed new technology such as the MRI scanner and satellite dishes, the Earthshots aim to launch their own tidal wave of ambition and innovation,” a press release for the initiative states.

A promotional video for the Earthshot Prize comes narrated by David Attenborough — the British nature documentarian well-known for his distinctive voice. “Ours is a world of wonder. Every day it reminds us of its beauty. It touches us, teaches us and astounds us but it also warns us that what we throw away does not go away, that higher temperatures mean a lot more than longer summers, that we can no longer take life as we know it for granted,” Attenborough says over a montage of different animals — polar bears, fish, butterflies.

In recent years, Attenborough has been an activist for climate change, too — making his case before audiences at the 2018 U.N. climate talks in Katowice, Poland, and at the 2019 World Economic Forum at Davos, in Switzerland. Also in 2019, he narrated Our Planet, a Netflix documentary series that examines the impact of climate change on threatening various environments and wildlife species. 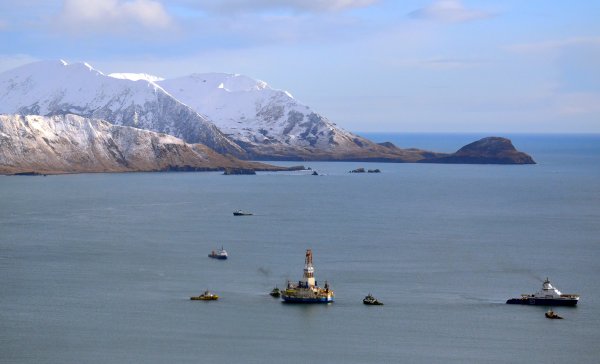 Putting Pressure on the Finance World Could Be One of the Most Effective Ways to Fight Climate Change
Next Up: Editor's Pick