New York Governor Andrew Cuomo announced an increase in police presence in Jewish communities after an attacker broke into the home of a rabbi in Monsey, New York Saturday night, stabbing five people. Monsey is about 45 miles from New York City.

The attack follows a string of possibly anti-Semitic crimes that have taken place in New York City since Dec. 13, police say. As of Monday morning, no clear motive had yet been established for the attack. “A motive now can just be hate,” said Cuomo, speaking in a television interview. “Hate is the new currency in this country… at our worst, we fear differences, we demonize differences and that is what we are seeing over this past year, two years all across the country. It’s in the political world, but it has gone viral.”

Some Jewish neighborhoods of New York City will see an increase in police presence in response to a string of recent attacks, Mayor Bill de Blasio announced Friday.

“Hate doesn’t have a home in our city,” he wrote. “Anyone who terrorizes our Jewish community WILL face justice.”

Police are investigating several possible anti-Semitic attacks that have occurred throughout New York City in recent weeks, the New York Police Department (NYPD) told reporters at a press conference Friday. Investigations include one attack that took place on Friday morning in which three Jewish women were slapped in the face by another woman who, during interrogation, told police she committed the crime because she thought the three women were Jewish.

Cuomo announced the State Police hate crimes task force would help NYPD in investigations following three other attacks that happened on Dec. 24, after the start of the Hanukkah holiday, including two men who were struck while walking down a street. State police and the NYPD are also currently assisting the Ramapo Police Department in the investigation of the stabbing in Monsey, Cuomo said Sunday morning.

“This is terrorism, it is domestic terrorism” Cuomo said at a Sunday morning press conference at the Ramapo Police Department. “These are people who intend to create mass harm, mass violence, generate fear based on race, color, creed — that is the definition of terrorism.”

Here’s what to know about the uptick in possible anti-Semitic attacks in New York City.

A suspect was apprehended shortly after breaking into the home of a rabbi who was celebrating the seventh night of Hanukkah. The suspect stabbed five people before fleeing the scene, police told reporters Saturday night. Two of the five victims remain hospitalized, according to officials Sunday morning.

Ramapo Police Chief Brad Weidel said the suspect is being charged with five counts of attempted murder and one count of burglary. He will be arraigned in Ramapo Town Court Sunday morning.

Police arrested a woman Friday morning who said she slapped three other women between the ages of 22 to 31 because she thought the women were Jewish, NYPD Chief of Detectives Rodney Harrison told reporters Friday. The incident happened just past midnight in the Crown Heights neighborhood of Brooklyn.

The Associated Press has since identified the woman as 30-year-old Tiffany Harris. The AP reported Saturday that Harris was released without bail after being arraigned on hate crime charges. Both Harris and her lawyer have declined to comment to reporters, the AP says.

Shortly before, on Dec. 26, a 34-year-old Jewish woman was slapped in the face with a shopping bag by a 42-year-old woman in the Gravesend neighborhood of Brooklyn. The 42-year-old used explicit language that targeted the Jewish woman, Harrison said Friday. The victim was with her 3-year-old child when the attack happened. The alleged perpetrator was also charged with committing a hate crime, according to Harrison.

Spate of attacks on Dec. 24

Several other incidents are still being investigated as possible hate crimes, Harrison told reporters on Friday. Three attacks occurred on Dec. 24 within hours of each other he said. That afternoon, a Jewish man was walking down a street in Crown Heights when a group began taunting him and one threw a slushy at him. Police are still searching for the perpetrator.

That same day in Crown Heights, a 56-year-old man was approached from behind in Crown Heights and struck in the back of the head by one person while another filmed. Police are investigated by the NYPD hate crimes task force.

Police said another man that day was struck in the face causing a laceration on his lip. The suspect fled on foot but was later apprehended and taken to a hospital for a psychological evaluation.

Police are still investigating two other possible anti-Semitic attacks that occurred on Dec. 23 and Dec. 13, Harrison told reporters Friday. One involves an incident of harassment on Dec. 13 where the victim was chased down a street while others yelled at him. 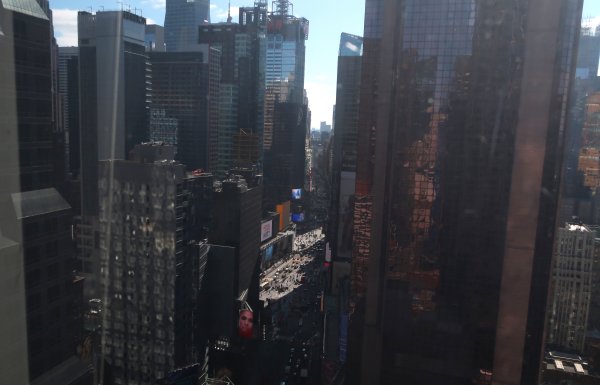 Woman Dies After Being Hit by Debris in NYC
Next Up: Editor's Pick