‘It Had a Lifelong Effect on Her.’ A New Virginia Woolf Biography Deals With the Author’s Experience of Childhood Sexual Abuse

The English author Virginia Woolf is one of the 20th century’s literary giants, renowned for the pioneering stream-of-consciousness style she immortalized in novels like To the Lighthouse and Mrs. Dalloway — but her fame has never been solely based on her work, as her personal life has long been the subject of fascination. Her involvement in the influential intellectual circle known as the Bloomsbury Group brought her attention, and her 1929 essay A Room of One’s Own did the same for her feminist ideas.

In her death, interest in the woman behind the books continued. After a lifelong struggle with her mental health, including periods of severe depression and suicide attempts, Woolf died in 1941 by drowning herself near her house in Sussex, England, at the age of 59. As TIME noted in her obituary, she left behind a body of work that was complex and lyrical. “To some readers [her books] didn’t always make sense,” the piece noted, “but they made her name and parts of them almost made music.”

To biographer Gillian Gill, it’s important to note another part of the Virginia Woolf story: her experience of sexual abuse during her childhood and as a young woman. In Gill’s recent book Virginia Woolf and the Women Who Shaped Her World, she highlights Woolf’s identity not only as a literary titan and a woman shaped by her female relationships, but also as a survivor of traumatic abuse at the hands of her half-brothers and later — not coincidentally — as an advocate for protecting children vulnerable to similar experiences.

“This [sexual abuse] is a subject of enormous controversy in Virginia Woolf literature,” Gill says. “By her own account, it had a lifelong effect on her and we see this when she’s in her 40s and she writes about it in her memoirs in 1939.”

During her lifetime, Woolf publicly stated — in her 1939 memoirs as well as a 1920 speech at the Bloomsbury Memoir Club — that, when she was a child, her genitals had been fondled by her half-brother Gerald Duckworth, and that, after the death of her father in 1904, both Woolf and her sister Vanessa Bell had been abused over a period of five years by their other older half-brother, George. The Duckworth brothers were the sons of Virginia Woolf’s mother, Julia Jackson, from her first marriage. Per the account of her nephew and biographer Quentin Bell, Woolf’s statements were met with some skepticism. Some biographers suggested that Woolf fantasized the abuse, and attributed her claims to her supposed “madness.” Bell wrote that several people had attempted to persuade him “that these ugly stories were untrue, that they were phantoms of Virginia Woolf’s wild imagination, delusions conceived during periods of nervous breakdown.”

Others like Gill, especially more recently, have suggested the opposite, that Woolf’s lifelong struggles with mental health were at least in part a result of the abuse perpetrated by the Duckworth brothers. Though many Woolf scholars today don’t question whether the abuse happened (in fact, much research in recent years has focused on this part of her life, among literature and psychology experts alike) disagreement persists about its effect on the rest of her life. Gill — building on the work of scholars like Louise DeSalvo, author of the 1989 book Virginia Woolf: The Impact of Childhood Sexual Abuse on Her Life and Work — holds that it’s impossible to understand Woolf without acknowledging the abuse.

“The incident where a child Virginia is placed on a table and has her knickers opened, that’s brushed off as being trivial. But what she says is that it wasn’t trivial for her,” says Gill. “What we have learnt now, as we hear more and more about what the effect of sexual abuse has, is that even a single incident can scar a girl or a boy. It’s something that they carry with them, and that molds them in unfortunate ways.”

From Gill’s reading of Woolf’s life, “as a great writer, as a great novelist, as a great understander of human relations,” the trauma she experienced would fuel her advocacy for children, and lead her to form a close and caring relationship with her sister Vanessa’s children. Their father, the author Clive Bell, was also part of the Bloomsbury Group; during her research, Gill came across suggestive postcards he had been sent, framing children as an object of sexual attraction. Gill argues that Virginia always “distrusted and disliked” Bell. “As I read more and more about the Bloomsbury group, I get more and more disturbed by aspects of it,” she says, “and I see Virginia as standing in opposition to so much of that.”

In some ways, this bond between Woolf and her nephews and niece paralleled other relationships that she had experienced earlier on in her life. “For some time I’ve been interested in mother-daughter and sister-sister relationships,” says Gill. “Mothering is not just biological, it can be adoptive.” Indeed, much of Virginia Woolf and the Women Who Shaped Her World is focused on the women of the Victorian era who were key influences in Woolf’s early life, like Anne Thackeray Ritchie, daughter of Vanity Fair author William Makepeace Thackeray, acted as a surrogate aunt, and her own career as a writer made an impression on a young Virginia, who was frustrated by the opportunities her brothers had that she did not due to her gender.

British writer Virginia Woolf in the garden of her house in Rodmell. Rodmell, 1926
Mondadori via Getty Images

Gill sees Woolf’s public revelations in her later life as her way of speaking therapeutically about the abuse — and argues that, in doing so, she helped many people deal with the issues she faced.

When Woolf addressed an audience of friends and colleagues with an autobiographical speech in 1920 and even when she collated her memoirs about two decades later, it was a “remarkably early” moment in history, Gill says, for a woman like her to give witness to sexual abuse within the family. Attitudes at this time, which are still pervasive today, tended to characterize child abuse as something perpetrated by “strangers” outside the family, with victim-shaming and blaming often accompanying these views. “This is one of the things Virginia says: Abuse is within families, it’s not the unknown predator from outside who snatches children from the streets. It’s the uncle, it’s the brother, this is the dark side of family life,” says Gill.

As late as the 1950s and 1960s, discourse surrounding child sexual abuse referred to its apparent minimal impacts on children, and some narratives attempted to portray incest as not harmful. For Gill, Woolf’s efforts to speak up about her own case set an example, and is still relevant today.

“It indicates to me that if you’re able to talk about it, you’ve made a stride, you’ve moved forward, you’re no longer a victim, you’re a survivor, you’re a protester,” Gill says. “This is such a complicated subject, but it seems to me that we’re making progress here, in a very dark area of human life. And listening is the least we can do.” 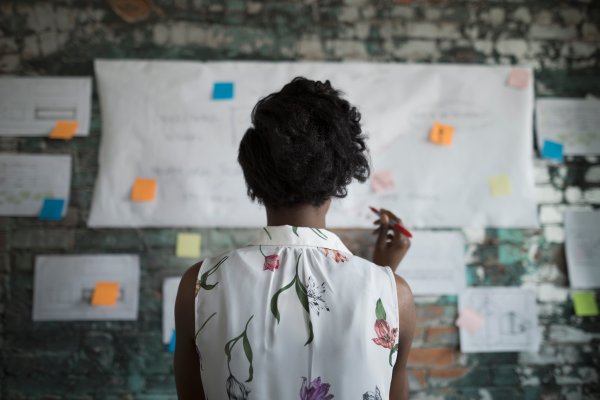 'Success Is Not a Solo Sport.' How Workplaces Can Better Support Women of Color
Next Up: Editor's Pick