“I am reduced to a thing that wants Virginia…It is incredible how essential to me you have become,” wrote Vita Sackville-West to the novelist Virginia Woolf in 1926. A popular writer herself, Sackville-West was proclaiming her love for Woolf during the most intense years of their romantic relationship in the 1920s. Although both were married to men, the two women penned hundreds of poetic letters to each other, and their relationship would inspire one of Woolf’s most celebrated works, the 1928 novel Orlando.

That relationship is the subject of a new film, Vita & Virginia, which includes lines lifted straight from the literary duo’s love letters. Starring Elizabeth Debicki as Woolf and Gemma Arterton as Sackville-West, the film from director Chanya Button is set against the backdrop of bohemian high society in 1920s London with a host of characters based on real-life people. Here’s the true story behind Vita & Virginia, Woolf and Sackville-West’s passionate relationship and the great literary work it inspired.

Who were Virginia Woolf and Vita Sackville-West?

Born in London in 1882, Adeline Virginia Stephen, or “Ginia” as she was affectionately known, had a love for arts and literature running through her family. Her sister Vanessa was an artist, and when they reached adulthood, the two sisters became the heart of an influential intellectual circle known as the Bloomsbury Group, a collective of radical artists, writers and thinkers during the early 20th century. In 1912, Virginia married Leonard Woolf, a politically active left-wing writer and university friend of her brother’s. While Virginia Woolf’s earlier novels, which included Night and Day (1919), Mrs Dalloway (1925) and To the Lighthouse (1927), were not hugely commercially or critically successful during her time, she is today respected as one of the most important writers of the 20th century and a pioneer of “stream of consciousness” writing.

The glamorous writer Vita Sackville-West was 10 years younger than Woolf and came from an aristocratic family. The Sackvilles’ ancestral home was Knole, a sprawling estate in southern England, and Sackville-West was always frustrated that she would never be able to inherit Knole due to her gender, as English aristocratic custom forbid it. (This was a point that Woolf highlighted in perhaps her most openly political and feminist work, the 1929 essay A Room of One’s Own, in which she advocated for women to be financially independent.) Sackville-West married diplomat Harold Nicholson in 1913, who would, like his wife, also come to have same-sex affairs outside of their marriage. In 1917, Sackville-West caused scandal in high society when she eloped with her lover Violet Trefusis to Europe; the pair spent two years on-and-off running away together and being brought back to England by disgruntled family members.

How did Virginia Woolf and Vita Sackville-West meet?

Vita & Virginia depicts the two women meeting at a costume party, at which Sackville-West is immediately entranced by Woolf’s intellect and eloquence. The two women met in December 1922 and grew closer through attending a series of dinner parties together in London. “I simply adore Virginia Woolf, and so would you,” Sackville-West wrote to her husband after their first meetings. “You would fall quite flat before her charm and personality.”

“They came from pretty different places,” says Victoria L. Smith, a professor of English at Texas State University. “That might have provided some of the attraction to Virginia for Vita, certainly. Vita was very attracted to Virginia’s genius.”

What impact did the relationship have on Virginia Woolf’s life?

“Their relationship was very passionate and very sexual, even though initially their sexual relationship was downplayed and even ignored,” says Smith. And while the two women were open about their relationship, it was also during a time when British society was more socially conservative. While male homosexuality in the U.K. was still a criminal offense at the time, there was no equivalent legislation that targeted gay women. However, in 1921, some lawmakers voted to criminalize “sexual acts of gross indecency” between women, although the law was never passed because politicians feared it would encourage women to explore homosexuality.

Smith says their relationship was hugely significant on Woolf, as Sackville-West made her feel appreciated and adored: “Virginia deeply loved Vita, and she was so happy to recognize in Vita that Vita loved and celebrated women.” In the film, Woolf is depicted as finding it initially difficult to be sexually intimate with Sackville-West; some scholars have suggested this hesitation in real life was because Woolf was a survivor of childhood sexual abuse perpetrated by male members of her family. And while Virginia still loved her husband Leonard, he too saw that Vita had a profound impact on his wife’s life, and her work, and he did not object to their relationship.

What impact did it have on Woolf’s and Sackville-West’s work?

As depicted in the film, after meeting Woolf, Sackville-West decided to publish her books with Hogarth Press, which was the Woolfs’ own small independent publishing house. Sackville-West’s books were commercially and critically the more successful during her and Woolf’s lifetimes, although today Woolf’s work is more highly regarded. In 1924, Sackville-West published her short story Seducers in Ecuador with Hogarth Press to help with the Woolfs’ mounting debts, and she followed it six years later with novel The Edwardians, which was a financial success. “Vita sold all these books, but people just didn’t really understand Virginia Woolf’s writing,” says Smith. But Sackville-West recognized that Woolf was the better writer, writing to her in 1925 that “I contrast my illiterate writing with your scholarly one, and am ashamed.”

“I think that Virginia Woolf recognized that she was quite a bit of a better writer than Vita ever could be,” Smith says. “I don’t think Woolf was jealous of Sackville-West’s writing, but she was jealous of her ability to be all these other things: to be a mother, to be beautiful, to have this sense of confidence that Woolf lacked at times about her being in the world, versus her writing.”

Woolf had wanted children, but her husband thought it would be detrimental to her mental health. Throughout her life, Woolf struggled with her mental health, experiencing episodes of depression and symptoms of bipolar disorder. She was institutionalized several times and died by suicide in 1941.

The relationship was clearly a source of inspiration for both women, but it was Woolf’s 1928 novel Orlando that would cement her status as an established writer and her legacy as a master of modernism. Spanning over 300 years, the novel features a protagonist who switches gender in a fantastical exploration of the self and the other. The book was described as “the longest and most charming love letter in literature” by Vita’s son Nigel Nicholson, and others have called it “the first trans novel in the English language.”

In a 1927 diary entry, Woolf wrote that she was writing Orlando “half in mock style very clear and plain, so that people will understand every word. But the balance between truth and fantasy must be careful. It is based on Vita.” The work was so personal that Woolf wrote to Sackville-West asking for her permission. Vita replied, “My God Virginia, if ever I was thrilled and terrified it is at the prospect of being projected into the shape of Orlando.”

What was the impact of Orlando?

As TIME described in 1928, Orlando was “audacious as it is masterly…The sweep of generations offers every opportunity for satiric commentary; the experience of both sexes an admirable occasion for comparison.” It was difficult for Woolf and other writers to approach themes of overt lesbian love in literature at the time. In 1928, Radclyffe Hall’s lesbian novel The Well of Loneliness sparked an obscenity trial and was condemned due to its depiction of “unnatural practices.” It was amid this backdrop that Orlando was published, selling twice as many copies in its first six months than To the Lighthouse sold in its first year.

Reviewers and the reading public were aware that Orlando was based on Sackville-West, and that the book’s gender-switching plot alluded to her bisexual relationships. “People knew it was Vita, and they thought it was fun and playful; that’s why people bought it,” says Smith. Not everyone agreed — as depicted in Vita & Virginia by Isabella Rossellini, Vita’s mother Baroness Sackville was horrified by Orlando, writing that she loathed Woolf for “having changed my Vita and taken her away from me.”

Smith has been teaching Orlando to students for more than two decades, and she says that even though the book was written in the 1920s, it speaks to relevant themes about gender and sexuality now. “It forces students to consider ideas about gender that they hadn’t really considered before,” she says. “Queer theory, being queer and that way of thinking of one’s self have changed pretty radically; it’s part of the discourse of everyday lives in a way that they weren’t 25 years ago. Woolf is just such a marvelous writer, and the way she talks about time and the issues of the self in Orlando are pertinent still.” 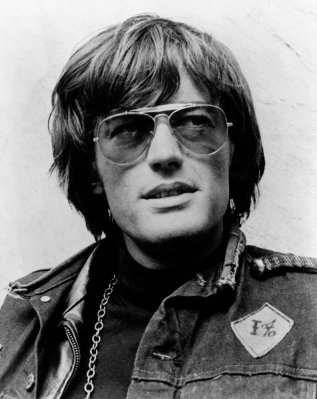 Remembering Peter Fonda as a Counterculture Star
Next Up: Editor's Pick