In the Year Since TIME Named Besieged Journalists the Person of the Year, the War Against Truth Has Continued Unabated

One year ago, TIME named besieged journalists the 2018 Person of the Year, gathered under the rubric the Guardians and the war on truth. Neither that war nor its consequences for democracy have abated in the intervening 12 months.

For Crown Prince Mohammed bin Salman, whose henchmen killed and dismembered Washington Post columnist Jamal Khashoggi in a Saudi consulate, life goes on much as before. In the spring, after the CIA detected new threats against Khashoggi’s associates, warnings went out to Canada, Norway and Washington, D.C. In November, the FBI arrested two former employees of Twitter, the platform often described as Saudi Arabia’s closest thing to a public square. Both were charged with passing on information about dissidents to bin Salman’s government.

By then, the crown prince had gone back to doing interviews with foreign press. Thirteen months and one day after Khashoggi’s murder, he presided over an IPO that valued the Saudi national oil company at $1.7 trillion, a world record. And in early December, the kingdom convened the Saudi Media Forum, to examine, according to its website, “challenges” facing the news media, “the formation of public opinion in the new environment of communication and etc.”

How? Hints lurk in CPJ’s new global survey, which documents what Radsch calls “an environment where it’s increasingly perilous to do journalism.” Imprisonment remains a favored tactic for repressive governments, and Saudi Arabia now ranks third in the number of journalists behind bars, tied with Egypt. China leads, with Turkey second. But naming and shaming works only when shame is enforced.

2018: The Guardians
Photographs by Moises Saman-Magnum Photos for TIME

“Where’s my favorite dictator?” U.S. President Donald Trump called out at a Group of Seven meeting in September, searching for Egyptian President Abdul Fattah al-Sisi. The leader of the free world has also heaped praise on the leaders of Saudi Arabia, Turkey and China.

Trump being Trump, Americans shrug—but overseas, a message is received.

Consider Myanmar, where the Reuters journalists Wa Lone and Kyaw Soe Oo, who joined Khashoggi as Person of the Year cover subjects, walked out of jail on May 6. Like their sentence, their freedom came at the whim of the generals who have long controlled the country. But as Myanmar is trying to pass as a democracy, the military has grown sensitive to appearances. That’s part of why Wa Lone and Kyaw Soe Oo were jailed in the first place: the two embarrassed their government by exposing its involvement in the slaughter of civilians. But steady pressure from outside—Western governments, the U.N., Reuters—brought home that what would really improve Myanmar’s image was freeing the journalists, signaling respect for the democratic norm of press freedom.

It’s a delicate business, and far harder when the norms are ignored.

After Trump made fake news a catchphrase for any report he did not like, governments from Malaysia to Egypt to Uganda made it a legal excuse to criminalize independent journalism. In Cairo, the offices of the independent news website Mada Masr were raided and editors arrested in November, shortly after the site reported that al-Sisi’s son was being demoted for failing to protect his father’s public image. Not even U.S. journalists are safe in Egypt these days: in September, the New York Times revealed that its Cairo correspondent had to escape threatened arrest with the help of the Irish embassy because, under Trump, the U.S. State Department cannot be relied upon to offer protection to American journalists working abroad.

“It’s much worse this year,” says Maria Ressa, chief executive officer of Rappler, the last major independent news site in the Philippines and another of the Guardians. “I posted bail eight times in three months.”

Vibrant, essential and often plain fun, Rappler stands at a crucial nexus for journalism globally. The site functions first as a watchdog to the government of Philippine President Rodrigo Duterte, a profane populist who not only traduces norms but also urges the assassination of Filipino citizens in the name of combatting drugs. But Rappler also rides herd on Facebook, which almost totally dominates the Internet in the former U.S. colony. Before Cambridge Analytica or Russia’s Internet Research Agency became household names in the U.S., Rappler reporters were documenting their government’s use of fake accounts to intimidate critics and drive its divisive narrative online without leaving fingerprints.

The result—sound familiar?—is a profoundly polarized society. As well-meaning people struggle to tell what’s true from what’s false, distrust in all information rises, and many folks end up just believing what they want. The resulting confusion undermines democracy, because democracy after all requires a common understanding of reality. The ones gaining from the confusion are despots, who cast themselves as vessels of public anger while pushing out their preferred version of reality.

At the local level, Americans may still know where their news comes from: they see a reporter in church or an editor at the store. When a gunman obsessed with a news story blasted into the Annapolis, Md., offices of the Gazette newspaper the Capital on June 28, 2018, and killed five people, neighbors offered not emojis but condolence cards and free counseling for the survivors. The Capital staff, designated the fourth set of Guardians, kept working through everything, and report finding both solace and more meaning than ever in what they do.

But local news has also been emaciated by the merciless shift of advertising revenue to digital giants like Google and Facebook; 7,700 media workers lost their jobs in 2019, far more than in the previous three years combined. The cuts reached all-digital newsrooms like BuzzFeed and Vice that supposedly had found a new business model. Meanwhile the success of a handful of outlets like the New York Times at funding first-class journalism by selling subscriptions has so far proved to be the exception.

Tech remains a paradox—delivering more information to people, but in ways that tend to give them less faith in what they’re reading. Last year, TIME concluded there was “urgent work ahead in shaping a communications system guided not by software but by the judgment of citizens, and the social contract implied in the First Amendment: facts matter.” That work remains to be done. 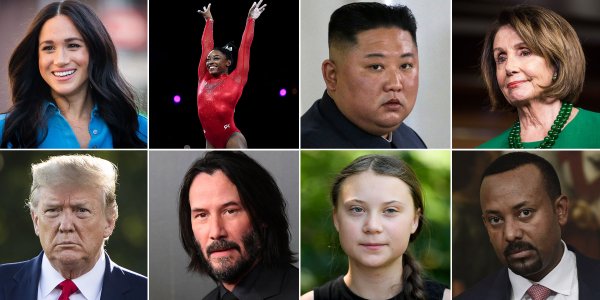 香港示威者在時代雜誌2019年年度風雲人物經讀者投票獲勝
Next Up: Editor's Pick