Amid growing concern about the number of journalists imprisoned or killed on the job around the world, TIME partnered with a dozen leading new organizations last month to launch the One Free Press Coalition, aimed at standing up for journalists who are threatened for pursuing the truth.

TIME named The Guardians the 2018 Person of the Year, recognizing four journalists and one news organization for their work in the face of threats. And in March, the One Free Press Coalition released its first-ever 10 Most Urgent list, identifying 10 journalists around the world who are facing injustice, incarceration and other threats in connection with their work.

The list will be updated on the first of every month.

Read about the cases on the April list below, included in no specific order:

In March 2017, La Jornada correspondent Miroslava Breach Velducea was murdered in the state of Chihuahua in connection to her reporting on links between politicians and organized crime. Prior to her death, she had received threats on at least three occasions for her reporting. Currently there is one suspect in custody, and the next hearing is expected to take place in a few months.

2. Maria Ressa and Rappler (The Philippines): Arrest and legal threats for critical media outlet and its editor.

National Bureau of Investigation officers arrested Ressa at Rappler on February 13 over a cyber libel case filed against her by the Justice Department. She was released the next day, but Rappler faces separate retaliatory tax charges. On March 28, authorities in the Philippines issued arrest warrants against Rappler editors and executives, including Ressa, for violating laws barring foreign ownership of media. CPJ and First Look Media are partners in a legal defense fund for journalists, of which Ressa and Rappler are the first recipients.

After a one-day trial, Tran Thi Nga was sentenced to nine years in prison on charges of “spreading propaganda against the state.” She produced a number of videos critical of authorities on topics like toxic environmental spills and government corruption.

The independent Indian journalist Rana Ayyub has spent her career covering taboo subjects, including violence against lower-caste groups and minorities in India. Because of her work, Ayyub has faced a wave of harassment on social media, including pornographic videos with her face photoshopped in them and the publication of her address and personal phone number.

In December, Nicaraguan police raided TV station 100% Noticias and arrested station director Miguel Mora and Lucía Pineda Ubau, its news director. Both journalists are being held on charges of “inciting hate and violence” and have been denied consistent access to legal services.

As editor of the Juba Monitor, Nimiriano fights to keep her colleagues out of jail for their reporting, and has in the past been ordered by the government to shut down the paper. She perseveres in spite of arrest threats and constant censorship of herself and her colleagues.

Radio journalist Amade Abubacar was arrested in January while photographing families fleeing militant attacks in northern Cabo Delgado province, and was detained incommunicado in a military facility. He has since been moved to a jail far from home. There are no signs he will be released any time soon as he continues to be held in detention without trial.

The veteran investigative reporter has endured kidnapping, illegal surveillance, psychological torture, and exile. Courts convicted three high-ranking officers of the Colombian security services for torturing Claudia and her daughter. As of January, all the detainees were released. The IWMF awarded Duque the Courage in Journalism Award in 2010.

Sudanese authorities arrested Mirghani, editor in chief of the independent Sudanese newspaper Al-Tayar, in February. Authorities have not made public what charges he is held on, and his health has deteriorated in prison. Prior to his arrest, Mirghani had been reporting on ongoing protests in Sudan. 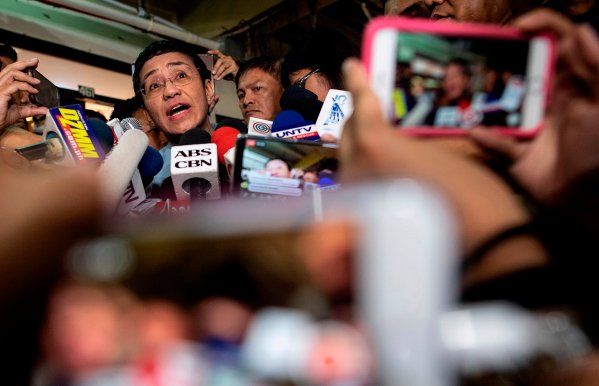 TIME, Others Launch One Free Press Coalition
Next Up: Editor's Pick