What We Know About the Jersey City Shooting Victims, Including a Father-of-5 and a Young Mother

By Jasmine Aguilera and Rachael Bunyan

Officials have identified the four victims of Tuesday’s hours-long shootout in Jersey City, New Jersey, that left a police officer dead and three civilians killed inside a kosher market.

Detective Joseph Seals of the Jersey City Police Department was the first person killed in the prolonged gunfight that began in a local cemetery, while Mindy Ferencz, Moshe Deutsch and Douglas Miguel Rodriguez were all later killed in the market frequented by members of the local Jewish community. Another civilian was also shot inside the market, but survived and is not being publicly identified, New Jersey Attorney General Gurbir Grewal said Wednesday afternoon. The two shooters also died in the attack.

The shooting spree broke out at the Jersey City Kosher Supermarket owned by Ferencz’s husband, according to Grewal. The crime has sparked concerns that it was an anti-Semitic attack, and on Thursday Grewal’s office, the lead investigative agency in the case, said the shooting is being investigated as an act of domestic terrorism.

Seals was a husband and father of five from Jersey City who was a police officer for 15 years, according to the New Jersey State Police Officer’s Benevolent Association. On Twitter, Jersey City Mayor Steven Fulop said Seals was probably responsible for “more guns being removed from the streets than any.”

Here’s what to know about the victims of Tuesday’s shooting.

Seals, a husband and father of five, was the first victim to be identified. Grewal said he was killed at the Bay View Cemetery, located about a mile away from the market, while on duty. Jersey City Police Chief Michael Kelly told reporters Tuesday evening that Seals was a leading police officer on the department’s cease fire unit and responsible for removing guns off the street. Kelly said Seals was killed trying to interdict the suspects who later killed three others.

The Jersey City Police Officer’s Benevolent Association began a GoFundMe to support Seals’ family. It has raised nearly $388,000 as of Friday morning. “We are heartbroken at the loss of yet another police officer killed in the line of duty,” the union wrote. “The officers involved came to work Tuesday, December 10, like they did every day, seeking to make our city safer.”

Ferencz, 32, was identified by the Office of the Attorney General on Wednesday afternoon. Chabad Rabbi Moshe Schapiro also identified her to reporters, who said she and her husband have three children, the oldest of whom is 11. Ferencz also co-owned the market where most of the shootings took place with her husband.

Mier Ferencz, Ferencz’s brother-in-law, honored her as “dedicated, a real mother and a real wife,” per Associated Press (AP).

“I can’t see why someone would disturb a decent family,” Ferencz added.

Rabbi David Niederman, president and executive director of United Jewish Organizations of Williamsburg and Northern Brooklyn, told reporters Wednesday that Mindy and her family moved to Jersey City because they found it to be more affordable than NYC. “She was a lady full of love for others, and unfortunately her life was cut so short,” he said.

This undated photo provided by Chai Lifeline shows Moshe Deutsch, who was killed Tuesday, Dec. 10, 2019, in Jersey City, N.J. Deutsch, a 24-year-old rabbinical student from Brooklyn, was one of three people who died when gunmen, targeting a kosher grocery where he was shopping, opened fire.
AP

Deutsch was 24 years old and a rabbinical student from Williamsburg, Brooklyn. He happened to be in the Jersey City store at the time of the shooting, Niederman said, per AP. New York City Mayor Bill de Blasio told reporters Wednesday morning that Deutsch was the son of a well-known Brooklyn community leader, Abraham Deutsch.

Deutsch actively gave back to his community, in part by helping his father organize a food drive that fed about 2,000 local families during Passover over the last several years, Niederman said, per AP. “The little free time he had he was busy helping others.”

Niederman also described how bullets went into the body of a “24-year-old child.” He broke down in tears as he asked, “How can we as a community, as a people bear that?”

Rodriguez, a 49-year-old employee at the market where the shooting happened, was identified as the third victim killed in the attack by The Office of the Attorney General. Rodriguez was not Jewish according to Niederman.

A GoFundMe shared by Rodriguez’s niece said he was an immigrant from Ecuador, a husband, father and sole provider for the family of three. His niece described him as “God-loving, honest and hard-working,” and said he had been employed at the supermarket for about a year. The GoFundMe so far has raised about $61,000 at the time of publication and will help the family pay for his burial to take place in his hometown of Guayaquil, Ecuador.

“Last night the family met with members of the Jewish community and got to learn about Miguel’s final moments,” wrote Vanessa Reyes, Rodriguez’s niece and organizer of his GoFundMe page on Friday morning. “Miguel died after heroically putting the lives of others before his. For some reason, this does not come as a shock to the family.”

Shaya Bodenstein, 41, from Brooklyn, told AP that he interacted with Rodriguez when he went to the store. “He was a quiet guy, always helping,” Bodenstein said, adding that if he ever needed help finding something, Rodriguez would personally take him to find it. 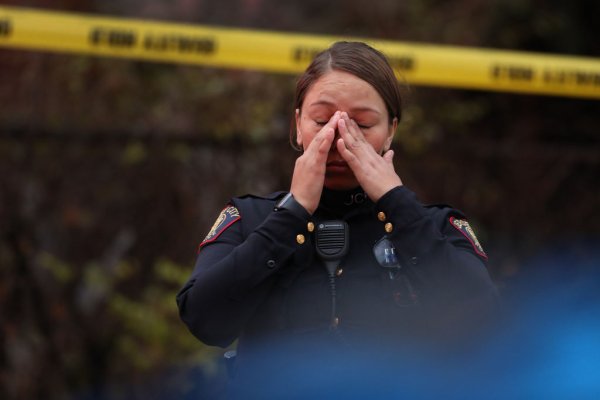 Jersey City Shooting: What We Know About Victims, Suspects
Next Up: Editor's Pick