If you want to set a movie in 2019, include a TikTok. 2019 was its year. The video-sharing social networking app — owned by Chinese tech company ByteDance — rocketed in popularity around the world, gaining millions of users and launching the careers of viral musicians like Lil Nas X and Blanco Brown.

To cap off a year of widespread popularity (and some controversy), TikTok has released a year-end round up. The social media platform has curated a list of “the top 100 collection of 2019’s top dances, memes, viral videos, celebrities and more that helped blast TikTok into the forefront of pop culture,” according to its announcement. Here are the some of the highlights:

TikTok crowned social media performer David Dobrik’s attempt at making “Elephant Toothpaste” the #1 viral video of the year. The stunt science video has over 17 million likes, and honestly has to be seen to be believed.

Caleb Cutler’s viral video of someone performing surgery on a banana made the list, because of course it did. It’s not just any old banana tonsil removal, after all! And so did Brittany Tomlinson’s ever-expressive tasting of a Kombucha drink — a review that launched a thousand reaction memes.

Other highlights in TikTok’s top 10 include a flying cockroach, an exploding swimming pool and a Croc filled with shaving cream. Just because you know what’s coming next doesn’t make it any less delightful. And, OK, yes, the dancing cat is there too! All together now: Mr. Sandman, bring me a dream…

As the social networking boldly asserts, “TikTok is at the center of meme culture.” It’s true that memes rise and fall with breathtaking speed on the app, with lots going on to enter popular lexicon. Many a meme competed for dominance in 2019, but one rose to rule them all.: TikTok named #POV as the #1 meme of 2019 — a video format in which TikTok users film from unexpected perspectives, such as the perspective of their Beautyblender.

Kylie Jenner’s iconic #RiseAndShine moment (after a clip of Jenner waking her daughter by singing “rise and shine” went viral) made the list, as did the #TikTokCheck, #DNATest and #WalkaMile, inspired by “Walk a mile in these Louboutins…”

The stars and breakouts

You can’t talk about TikTok without talking about Lil Nas X, so it makes sense he was named the #1 TikTok artist of the year. The 20-year-old musician’s massive hit “Old Town Road” dominated the charts this summer, but before it was playing in your grocery store it was on TikTok as a viral meme thanks to the “yee haw juice challenge” taking off. TikTok users would mime drinking “yee haw juice” and suddenly become a cowboy as Old Town Road played — that’s why your teen bought that ten gallon hat.

As TIME reported back in August, Lil Nas X is an artist shaped by the Internet, having spent his teen years “creating memes that showed his disarming wit and pop-culture savvy.” His Internet fluency clearly paid off — he’s already been nominated for six Grammys and is changing the face of both country and rap music as an openly gay Black man.

TikTok also cited the influence of Lizzo, Stunna Girl, Y2k & Bbno$ and Blanco Brown’s “Git Up,” because why stop at just one cowboy trend?!

Celebrities also got a mention for their presence on the platform, led by Will Smith. Smith may be 51 years young, but he can keep up with the most savvy TikTok teens out there. The Gemini Man star reached a whole new generation of viewers on the social media app, and was named as the #1 celebrity on TikTok of 2019. Miley Cyrus, The Rock, and Post Malone were also amongst the A-Listers receiving a nod.

And TikTok also highlighted some of its most creative original creators, adding they are “at the heart of TikTok’s global community.” Many spend hours producing and developing their content, but manage to make their short videos feel seamless.

Ahead of beauty vlogger James Charles, Anna O’Brien of Glitter and Lasers, and Johnathan of “This Ain’t Jay,” TikTok named Zach King — know for his optical illusion videos — as the #1 breakout creator of the year. Why does this not always work with water bottles, though?

In more specific viral veins, TikTok also highlighted the best dance challenges, beauty trends — look at those braid skills, for example — animal videos, creative effects, and sports moments. For example, remember the Spooky Skeleton dance numbers, or the disconcertingly tearful “Obsessed” performance? (A notable omission in the dance category, though, would have to be the Superstar challenge.) Yes, there were also dancing ferrets, and viral cat Marley.

For Marley alone, we should all very grateful, but these highlights only scratch the surface of all the great content TikTok complied from this year. Check out the whole list. 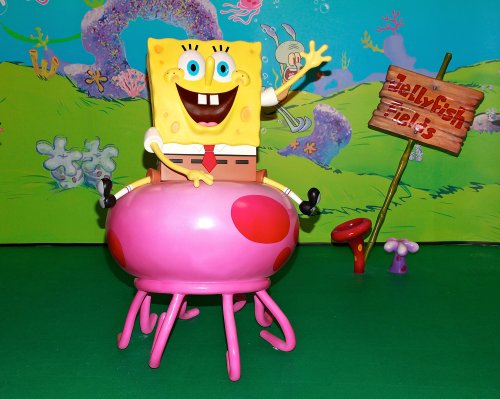 Is This the Best Use of a Spongebob Meme Ever? Probably
Next Up: Editor's Pick