Teens Are Going Viral With Theatrical History Lessons on TikTok. These History Educators Are Thrilled.

It’s no surprise that teens are trying for their 15 seconds of fame via TikTok. After all, the short-form video program only allows in-app recordings of up to 15 seconds. But while users often gain millions of views on the social media app by participating in goofy memes and dances with popular background music, a new trend has emerged — and, shockingly enough, they are history reenactments.

Brooke Pavek, a 17-year-old high school senior from Jacksonville, Fla., is pretty sure she got a 100 on a Cold War exam in her International Baccalaureate history class. But this isn’t just any history student. Pavek has amassed more than 78,000 followers and 3.5 million “hearts” on TikTok by sharing her history knowledge in the form of funny, theatrical 15-second clips. And she’s using her notes from Advanced Placement (AP) history classes to make them.

Pavek is one of a group of teenagers doling out their own history lessons online. “I take a lot of notes from those classes to make the videos, trying to fit the audio to those topics, and those key ideas in order to basically help kids learn,” she says. Some of her TikToks were included in a viral Oct. 25 Twitter thread that highlighted some of the trend’s most popular snippets.

Pavek started her account to help other students study for AP classes (what’s a better mnemonic than one involving a hip-hop song?). Some historians and educators say they’re delighted to see kids clearly enjoying history class.

“In order to be this irreverent and this playful with a subject, you have to gain some mastery of it. So the hardest thing to do is to synthesize something — to summarize it in a sentence. And these teenagers have done it in 15 seconds. It’s not the whole story, but it’s certainly a really aggressive and exciting way to look at it,” says Alexis Coe, a historian and author of the forthcoming You Never Forget Your First: A Biography of George Washington.

Brooke Pavek, a high school senior who uses TikTok for funny videos about history, dresses up as Maximilien Robespierre, an important figure in the French Revolution.
Courtesy Brooke Pavek

Of course, the video quickly aims to retell a much longer story. Though U.S. President Woodrow Wilson had first proposed the league in his January 1918 “Fourteen Points” speech for a vision of peace in Europe post-World War I, the U.S. never joined the league. (Those 14 points served as the basis of the Treaty of Versailles.) Wilson battled the Senate Majority Leader, Republican Sen. Henry Cabot Lodge, who was opposed to the League of Nations, and Congress never voted to join. “Most historians hold that the League operated much less effectively without U.S. participation than it would have otherwise,” according to the U.S. State Department’s Office of the Historian.

While a TikTok tells the story in simpler terms, Grace Leatherman, the executive director of the National Council for History Education says this interpretation of history is “as good as you can do” in a short clip, and it should inspire students to do more research on their own. “I don’t know how else you would explain the League of Nations in 15 seconds,” Leatherman tells TIME. “But that certainly shouldn’t be all a student learns about it. This is a helpful tool, it’s a great way to help summarize and identify some of these key things, but obviously we certainly want students going deeper.”

But where is the line between interpretation and inaccuracy? “That’s what we do with history, is to try to figure that out,” says Leatherman. “So I think that’s wonderful, if they make a TikTok that describes key ideals about a time in history, but I would want to make sure that student is also looking at a variety of primary documents.”

Beyond your textbooks, she recommends using the Library of Congress and National Archives Leatherman highlights the importance of using a variety of sources to learn about history to help your understanding of a subject.

One example of a video that shares key ideas of a subject, rather than a specific snapshot of a moment in history, depicts European settlers intruding on native peoples who are “minding their own business.” It’s one of Coe’s favorites.

Another viral TikTok hit focuses on the colonization of Africa, illustrating a complex topic — European imperialism — through different dance moves for different European nations. Sharoon Bi, a high school senior from Lincoln, Neb., demonstrates how European colonizers began to impede on the lives of Africans in the 1400s.

While the video depicts Spain, Britain, Portugal and France all invading in the 15th century, history books tell a different story. Only the Portuguese invaded African nations in the 1400s. But the British, French and Spanish followed suit in the subsequent centuries. “By the early twentieth century, however, much of Africa, except Ethiopia and Liberia, had been colonized by European powers,” Hunter College Professor Ehiedu E.G. Iweriebor wrote in an essay for the Schomburg Center for Research in Black Culture at the New York Public Library.

Bi, 17, didn’t realize that he’d gotten the dates wrong when he first posted the video. But he’s glad that commenters pointed it out. “I’m happy that they said it, because that let me know I should do more research,” he tells TIME. “For me, it was an actual learning experience.”

Despite the fact that historical accounts can inevitably spark debates on the internet, both Coe and Leatherman had a lighthearted perspective on the videos — accurate or not. Coe says the overall point of the clip gets across so powerfully that it supersedes factual accuracy. “The message that he’s trying to communicate is really important here, and even in the act of fact checking what he’s saying, [students] are learning,” says Coe, who adds that these videos fill her with “pure joy.”

“This makes me so hopeful for the future,” she says.

The videos also demonstrate a student’s unique interpretation and understanding of history — and many history teachers nationwide are starting to use TikToks to assess students, according to Leatherman. TikTok is just one way “that students can show us what they know,” she says.

Pavek’s contemporary history exam on Thursday may not have happened through TikTok. But on Friday, as views continue to rise, she won’t be spending too much time on her phone. She’s headed to tour a college where she hopes to major in history, before getting her Ph.D.

Naturally, her dream job is to be a history professor. 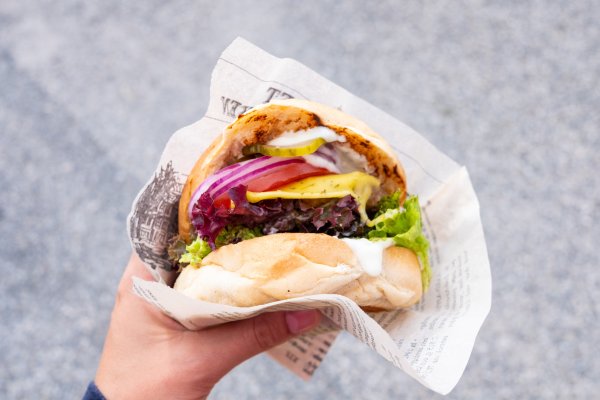 This Taunting Burger Is a Horror Show No One Can Escape
Next Up: Editor's Pick