Two senior leaders of an American business organization in Hong Kong were denied entry to neighboring Macau over the weekend amid heightened tensions between the U.S. and China.

The president of the American Chamber of Commerce in Hong Kong, Tara Joseph, and the group’s chair, Robert Grieves, were separately denied entry into the Chinese-ruled territory on Saturday.

Neither Grieves nor Joseph was given a reason for being turned away.

“We are puzzled as to why this happened, given this was simply a social occasion to celebrate AmCham Macau’s annual gathering,” an AmCham spokesperson said in a statement.

Both Joseph and Grieves were en route to Macau to attend AmCham’s annual ball, which the Chief Executive of Macau and the U.S. Consul General in Macau and Hong Kong were expected to attend.

Their refused entry comes at a time of escalating fiction between Washington and Beijing. The world’s first and second largest economies are trying to end their bruising trade war, while also clashing over the ongoing political unrest in Hong Kong.

In November, President Donald Trump signed the Hong Kong Human Rights and Democracy Act in support of the pro-democracy protests that have gripped the financial hub since early June. The legislation will require the State Department to annually assess whether Hong Kong retains sufficient political autonomy from Beijing to merit favorable trading terms with the U.S.

In retaliation, China banned U.S. Navy visits to Hong Kong and slapped sanctions on several U.S.-based NGOs. Beijing perceives the protest movement as the result of meddling by foreign governments, including the U.S.

“We hope that this is just an over reaction to current events and that international business can constructively forge ahead,” AmCham said in the statement.

The AmCham leaders were made to sign statements saying they had “voluntarily agreed not to pursue entry into Macau,” before they were sent back to Hong Kong, the statement adds.

With Hong Kong in the midst its worst political crisis in decades, Beijing has proffered Macau as a successful example of the so-called “one country, two systems” model that governs both Special Administrative Regions.

Macau has been quick to clamp down on any shows of solidarity for its neighboring enclave. Officials in Macau have denied requests for demonstrations and have reportedly detained several people showing support for the Hong Kong protesters.

Chinese President Xi Jinping is expected to visit Macau next week for celebrations marking the twentieth anniversary of the former colony’s handover from Portugal. 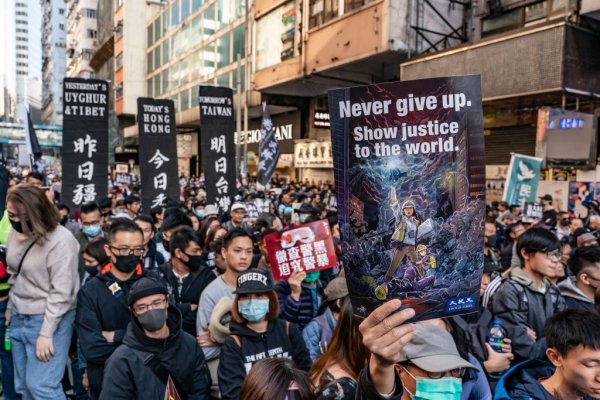