Huge screens live-streamed Beijing’s grandiose military parade, and colorful fireworks flashed above the city’s glitzy casinos, as Macau commemorated China’s National Day on Oct. 1. Not everyone, however, was in the mood to celebrate. Jason Chao—one of Macau’s most outspoken democracy and human rights activists—had spent weeks applying to hold a peaceful protest in his hometown. Authorities denied his initial application in September, and late on the eve of the Oct. 1 holiday—the 70th anniversary of the founding of the People’s Republic of China—he found out that authorities had shot down his appeal.

Chao had planned to gather 15 people to carry placards and posters opposing alleged police brutality in Hong Kong, China’s other Special Administrative Region (SAR) as the two semi-autonomous enclaves are called. In Hong Kong—where protests against a controversial piece of legislation have escalated into an anti-communist rebellion—it was tear gas and Molotov cocktails lighting up the sky on National Day, instead of the usual annual fireworks display, as protesters came out in full force to repudiate Beijing’s control over the territory. But Macau officials denied Chao’s appeal, saying the rally would interfere in Hong Kong affairs.

As unrest grips Hong Kong, authorities in Macau are cracking down on any show of solidarity by Macau residents for their Hong Kong neighbors, who live just an hour’s ferry ride away across the Pearl River Delta. On Oct. 1, two people were questioned for sticking posters on a wall. Photos circulating on social media showed signs that read: “Support each other, Hong Kong and Macau.” In August, authorities detained four students who set up a so-called Lennon Wall—murals of colorful Post-it notes bearing handwritten pro-democracy slogans that are a common sight in Hong Kong. The same month, police banned a demonstration in support of Hong Kong’s anti-government protesters and detained seven people. And earlier this month Macau’s Secretary for Security said an event where two students held signs or banners supporting Hongkongers could be treated as an illegal gathering.

Chao thinks that the turmoil in Hong Kong is putting Macau’s government under pressure. “They want to present Macau as the perfect embodiment of ‘one country, two systems,'” he tells TIME, referring to the political formula by which China administers its SARs. “It’s utterly unconvincing.”

Some say officials are going too far. “Macau police and courts have been illegally repressive of freedom of assembly and of freedom of expression,” Jorge Menezes, a prominent lawyer in Macau, tells TIME.

Experts say that political activity by Macau’s youth has been on the uptick for several years, not just the last few months. “Youth activism in Macau has been challenging the local as well as mainland authorities,” Eilo Yu, associate head and associate professor of government and public administration at the University of Macau, tells TIME.

That may explain why Chinese President Xi Jinping mentioned Macau, alongside Hong Kong and Taiwan, as major risks and challenges for the Chinese Communist Party while speaking to officials in early September.

‘This is China; no one questions it’

Macau — a city of 640,000 crammed into 12 densely populated square miles — has a reputation as China’s well-behaved SAR. Its lawmakers dutifully passed a national security law — making acts like sedition, subversion and treason illegal — that in Hong Kong brought some 500,000 angry citizens to the street and caused the downfall of the city’s leader. In Macau, legislation banning mockery of the Chinese national anthem passed almost without notice; in Hong Kong the bill caused a public outcry and has yet to be passed into law.

Part of Macau’s acceptance of Chinese rule may be down to history. Although the former Portuguese colony returned to Chinese rule in 1999 as an SAR, the territory has been under de facto Chinese rule since 1966 when pro-communist riots ended with the Portuguese government ceding much control to pro-China elites and trades unions.

“The Portuguese struggled to keep control of the government in Macau,” Catherine Chan, an assistant professor of history at the University of Macau, tells TIME.

And unlike Hong Kong, which is one of the world’s largest financial centers, Macau is dependent for mainland cash for its survival. Gaming-related taxes account for about 80% of government revenues, according to the U.S. public policy think-tank the Heritage Foundation. Of the 35 million tourists that came to the city to place their bets in 2018, more than 70% were from mainland China.

“This is China; no one questions it here,” says José Luis de Sales Marques, the mayor of Macau from 1993 to 2001, who now is now the head of Macau’s Institute of European Studies. He tells TIME that what’s happening in Hong Kong is unlikely to spread. “I think we can never say there’s zero risk, but I think there’s very minimal risk here.”

But Macau is plagued by some of the same structural problems that have, in part, driven unrest in Hong Kong. Although the headline numbers look good—the casino hub has the world’s second highest GDP per capita and unemployment rate is low, at around 2%—they mask deeper, systemic issues. The average monthly income in the city is less than $2,000, for example, and an economy highly-dependent on the gaming industry means employment opportunities are largely confined to jobs in casinos, or related industries like construction, tourism and retail that don’t offer the young much social mobility.

Paul Pun, secretary-general of Catholic charity Caritas Macau, tells TIME that inequality is inching upwards in the city, where flashy casinos tower over decaying apartment buildings. “The standard of living and livelihoods are eroded by inflation and the increased cost of living,” he says. According to global consultancy ECA International, Macau has jumped seven places to become the 25th most expensive place in the world to live.

Although Coutinho has been outspoken on social issues in Macau, the legislator, whose Macau office wall is adorned with a large portrait of Chinese President Xi Jinping hanging next to a picture of the Portuguese President, is realistic about the bounds of the “one country, two systems” model.

“People want democracy everywhere in the world, but what can we do? We are so small here,” he says.

‘They will crush all opposition’

But a new generation of politicians is calling for change. “We hope the only candidate for chief executive will re-start political reform,” Sulu Sou, Macau’s youngest elected lawmaker, tells TIME.

Small acts of resistance seem to come naturally to the 28-year-old, who during an interview with TIME at his Macau office includes the qualifying phrase “the only candidate” each time he refers to the incoming top official, highlighting that the city’s next leader was the only nominee presented to a selection committee of 400 special interest group representatives.

Sou agrees that Hong Kong’s fight for democracy won’t come to Macau, and he has not made a public declaration of support for the Hong Kong protesters. But it’s clear why he may need to tread carefully if he wants to keep his seat. Just 48 days after he took office in 2017, he was suspended from the legislature so that he could face trial for charges related to participating in a demonstration outside the current Chief Executive Fernando Chui’s house in 2016. Sou said he believed he was just exercising his right to freedom of assembly during the rally to protest a controversial donation made from the semi-official Macau Foundation to a university in China. (Chui had links to both organizations.) Sou was charged with aggravated disobedience and fined before he was allowed to resume his post.

Sou is fighting for the future of Macau in his own way, though. The political party he leads, the New Macau Association, ran an online poll in August with just one question: “Do you agree that the Chief Executive of Macau SAR should be elected by universal suffrage?”

It was set to close on Aug. 25, the day Beijing loyalist and industrialist Ho Iat Seng was announced as the city’s next leader. Sou says that he and other members of his party received threats—he won’t elaborate on their nature—that forced them to close the poll early, but they did release the results: 94% of the 5,698 people who responded to the poll supported universal suffrage. Sou says that although he knows Macau won’t change overnight, he has hope that one day democracy will come to Macau.

But the activist Chao, who helped out on IT support for the online poll, fears that things are moving in the wrong direction.

“I’m concerned that they will crush all opposition, so we can’t even talk about democracy,” Chao says. 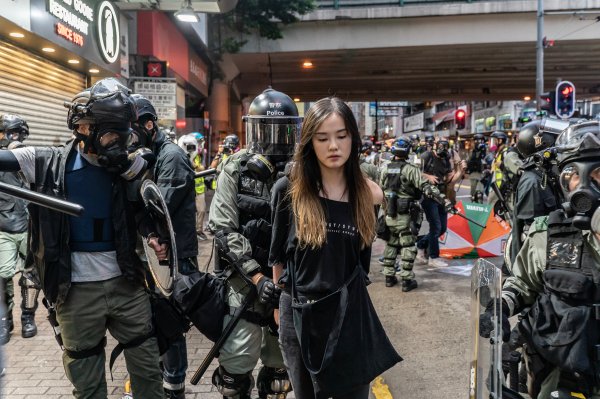 Protests Erupt for Third Consecutive Day in Hong Kong
Next Up: Editor's Pick