Protesters gathered outside the British consulate in Hong Kong Wednesday evening to voice shock and dismay at the detention of a consulate staff member by mainland Chinese authorities.

Geng Shuang, a Chinese foreign ministry spokesman, said earlier Wednesday that Simon Cheng, a 28-year-old Hong Kong citizen, was being held in the neighboring Chinese city of Shenzhen for a legal violation.

Hong Kong’s government-funded broadcaster, RTHK, quoted Geng as saying “The person you mentioned has been placed in administrative detention for 15 days as a punishment” for breaking a public security law.

Cheng, a trade and investment officer at the consulate, was reported missing after he failed to return from a business trip to the neighboring Chinese city of Shenzhen on Aug. 8. His girlfriend told local media that he had messaged her shortly before attempting to pass through a border control point, saying “pray for me.”

On Wednesday evening, two friends of Cheng’s presented a petition to the consul-general demanding that the U.K. government “mobilize all efforts to save Simon” and “issue immediate travel warnings on Hong Kong.”

One of the friends, Max Cheung, called on U.K. prime minister Boris Johnson to “act now or never” and said the U.K. had “fallen short” in its duty to protect Cheng.

Cheung claims that his friend was detained while at a rail terminus on Hong Kong soil but in a part of the station that comes under mainland Chinese jurisdiction. The so-called Mainland Port Area of the West Kowloon rail terminus has aroused enormous controversy in Hong Kong, with many calling the arrangement a violation of the enclave’s autonomy.

If Cheng was detained in the port area, the worst fears of many in Hong Kong about Chinese encroachment on their freedoms will be realized. However, a Chinese police officer at the facility denied to local media that any arrests had been made on Aug. 8 or Aug. 9.

In any case, news of Cheng’s detention will exacerbate already worsening tensions between China and the U.K., which governed Hong Kong as a colony for 156 years before retroceding it to China in 1997.

In July, then U.K. Foreign Secretary Jeremy Hunt pledged “unwavering” support to “Hong Kong and its freedoms.” Also last month, Boris Johnson — then the political front runner for the prime-ministership he now holds — said he backed Hong Kong’s anti-government protesters “all the way.”

Such remarks have infuriated Beijing, which has accused the U.K. and other Western countries of being behind Hong Kong’s ongoing unrest. Last week, the Chinese ambassador to the U.K. said some British politicians were living “in colonial days” and warned the U.K. against interfering in the semi-autonomous enclave, which is politically, culturally, and linguistically distinct from the rest of China.

Cheng’s detention also comes as Hong Kong travelers report having their phones searched at the Chinese border by officials looking for photos, videos or other evidence of participation in the 12 weeks of protests that have rocked the territory.

One woman told the BBC of being forced to delete photos of the protests from her phone and said “None of my friends want to go to mainland China now.”

Hong Kong’s unrest began as a series of demonstrations against a now-suspended bill that would have allowed, for the first time, the extradition of fugitives to the mainland. Critics said the bill would be used by Beijing to apprehend dissidents and political opponents.

Peaceful marches against the bill quickly escalated into an anti-government rebellion, with many protesters repudiating Chinese sovereignty and calling for self-determination for Hong Kong’s 7.2 million people. Protesters have torn down the Chinese flag from flagpoles, defaced emblems of the Chinese state, and frequently assert that “Hong Kong is not China.”

At the vigil for Cheng, many protesters voiced fears about traveling to the mainland.

“I used to go to Shenzhen a lot, I have friends there,” said Rory, a 24-year-old media worker. “Now I just don’t, because they might check my mobile phone. If they think you’re provocative they might detain you like Simon. I just don’t think it’s safe to cross the border right now.”

It is not known if Cheng participated in any protests. However, Charlotte, 26, said that his case showed “what will happen if the extradition bill passes.”

Yanis, a 24-year-old teacher, said the case made it even more imperative for the Hong Kong government to formally withdraw, instead of merely suspend, the extradition bill.

“I’m afraid that there might be more Simons, not just this one,” she said. 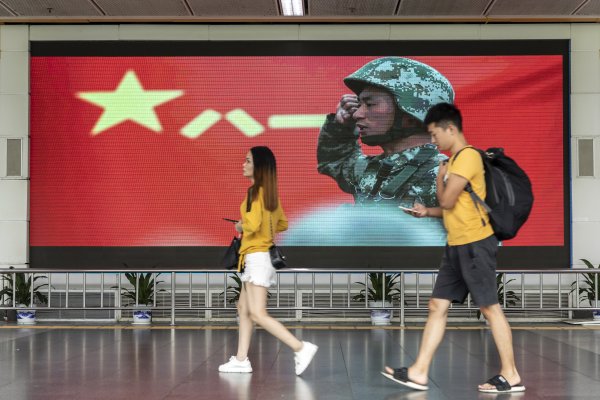