'Our Democracy Is at Stake.' Pelosi Orders Democrats to Draft Articles of Impeachment Against Trump

House Speaker Nancy Pelosi announced on Thursday that she is instructing her deputies to move forward with drafting articles of impeachment against President Donald Trump, the next step in a nearly three-month long investigation that has consumed Washington, D.C. and divided the nation.

Clad in a white blazer in the Speaker’s Balcony hallway at the U.S. Capitol, Pelosi somberly announced her belief that President Trump had indisputably used the power of the presidency to benefit his reelection campaign by withholding foreign assistance to Ukraine in the hopes of compelling an investigation that could damage potential election foe Joe Biden. This warranted articles of impeachment, she said. “The President abused his power for his own personal political benefit at the expense of our national security by withholding military aid and a crucial Oval Office meeting in exchange for an announcement of an investigation into his political rival.”

These actions, she continued, were “a profound violation of the public trust.”

The White House said in a statement issued on Thursday in response to Pelosi’s remarks that she “ignore(d) the needs of the American people” to “advance her selfish political desires.”

“Democrats’ sham impeachment is a blatant, purely partisan attempt to overturn the results of a free and fair election,” the statement said. It also accused Democrats in Congress of abusing their power.

The announcement immediately drew a response from Trump on Twitter. “The Do Nothing, Radical Left Democrats have just announced that they are going to seek to Impeach me over NOTHING. They already gave up on the ridiculous Mueller ‘stuff,’ so now they hang their hats on two totally appropriate (perfect) phone calls with the Ukrainian President.”

He added: “This will mean that the beyond important and seldom used act of Impeachment will be used routinely to attack future Presidents. That is not what our Founders had in mind. The good thing is that the Republicans have NEVER been more united. We will win!”

Pelosi’s order to draft articles of impeachment marked a major development. Just 12 weeks earlier, she stood in that exact spot in the Capitol to throw her support behind a formal impeachment inquiry, but declined to prejudge the outcome. Now, she is trying to convey that she has no choice but to push forward yet again. Her historic remarks on Thursday were imbued with the Constitutional intent of impeachment. The founding fathers, she said, had written impeachment into the Constitution as a remedy for actions like Trump’s.

“His actions are in defiance of the vision of our founders and the oath of office that he takes to preserve, protect and defend the Constitution of the United States,” she said

The solemn tone Pelosi struck in her public remarks was similar to the one she employed in a closed-door Wednesday meeting with her caucus, according to a senior Democratic aide. During that meeting, she again emphasized this was a “prayerful” time and stressed that every lawmaker should reach their own decision, according to the aide.

Pelosi’s remarks capped off a week of major developments on impeachment. On Tuesday, Democrats on the House Permanent Select Committee on Intelligence, which had been spearheading the fact-finding component of the inquiry, released their 300-page report alleging that Trump had undermined national security interests. And on Wednesday, the House Judiciary Committee held its first hearing in the process, inviting four constitutional scholars to testify about whether Trump’s conduct was impeachable. Unsurprisingly, the Democratic witnesses unanimously agreed it was, with the Republican witness dissenting.

Pelosi said the scholars at the hearing reinforced the argument that Trump’s actions amounted to impeachable conduct. “[They] illuminated without a doubt that the President’s actions are a profound violation of the public trust,” she said.

Despite the President’s tweet, Trump’s reelection campaign seemed unsurprised by the news. “We are less than a year away from Election Day 2020 and Democrats can’t possibly explain to the American people why they want to take the decision of who should be president out of the hands of voters,” campaign manager Brad Parscale said in a statement. “But impeaching the President has always been their goal, so they should just get on with it so we can have a fair trial in the Senate and expose The Swamp for what it is. Speaker Pelosi, [House Intelligence Committee] Chairman [Adam] Schiff and Hunter Biden should testify, and then we can get back to the business of our country.”

The decision to move forward, however, does not come without its risks. For months, Pelosi had insisted that impeachment would need to amass bipartisan support to be successful. But as the inquiry advanced, it became clear that lawmakers were remaining in their respective partisan lanes – not a single Republican voted to advance the inquiry on October 31 – and polling shows impeachment is highly unpopular with registered Republicans. The next phase will inevitably exacerbate those tensions.

“I am more confident,” said House Minority Leader Kevin McCarthy on Wednesday, “that the bipartisan vote on impeachment that comes to the floor will be no.”

– With reporting by Tessa Berenson and Sanya Mansoor 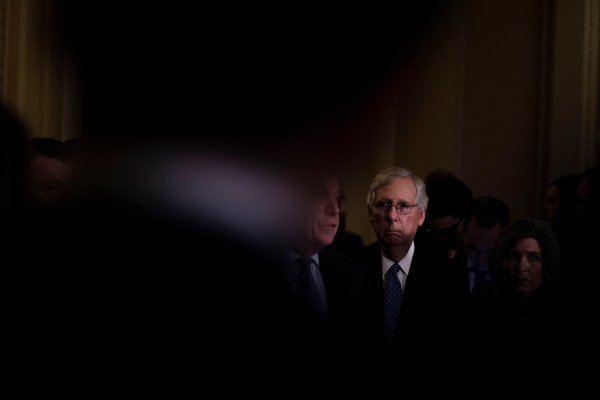 Inside McConnell's Reluctant Preparation for Impeachment
Next Up: Editor's Pick