2 Killed in London and at Least 3 Injured in The Hague in Separate Stabbing Incidents. Here's What We Know So Far

By Billy Perrigo and Madeleine Carlisle

Two people — a man and a woman — were killed in a stabbing incident on London Bridge in Central London, in what has been described by police as a terror incident. Three other people are in hospital. The man suspected of carrying out the attack was shot by police.

Just hours after the attack in London, Dutch police also reported that multiple people were injured in a stabbing on a shopping street in The Hague, and are still looking for the suspect. Per the Associated Press, three people were injured, and a police spokeswoman said it is still unclear if those injuries are life-threatening.

What Happened at London Bridge?

At a press conference Friday night, police said the attack began at Fishmongers Hall in the City of London. Metropolitan Police Commissioner Cressida Dick said, “My understanding is that police were called at 13:58hrs and City of London police officers had bravely and professionally confronted the suspect by 14:03hrs, just five minutes later.

In a statement Saturday, police named the attacker as 28-year-old Usman Khan, who had been convicted in 2012 for terrorism offenses. He was released from prison in 2018.

Police confirmed that a suspect had been shot and died at the scene, and two members of the public were killed. In a press conference Friday night, police also said three other victims — a man and two women — remain in the hospital. Assistant commissioner Neil Basu said the suspect was wearing a hoax suicide vest.

Police and emergency vechiles gather near London Bridge in London, on November 29, 2019 after reports of shots being fired on London Bridge.
AFP via Getty Images

“As you would expect, due to the nature of the incident, we responded as though this this was terrorist related. I am now in a position to confirm that it has been declared a terrorist incident,” Basu said. “I must stress we retain an open mind as to any motive.”

London Bridge was the site of a terror attack in 2017. The bridge remained on lockdown on Friday evening, but police indicated that the man who was shot was the only suspect in the incident.

Several videos circulating on Twitter appeared to show a group of people wrestling a man to the ground, before he was shot by police.

Dick thanked the members of the public who have helped, either by tackling the attacker or by the following the police’s instructions.

Dick said more police will be patrolling London in the coming days. She added were working to determine if anyone besides the suspect was involved in the attack.

“The empty ideology of terror offers nothing but hatred and today I urge everyone to reject that,” Dick added. “Ours is a great city because we embrace each other’s differences. We must emerge stronger still from this tragedy. In doing that we will ensure that the few who seek to divide us will never, ever succeed.”

“Heartbreaking confirmation from the Met Commissioner that two people who were attacked this afternoon have tragically died – victims of the appalling terrorist attack at London Bridge,” Sadiq Khan, the mayor of London, said in a statement. “My heart goes out to them, their loved ones and to everybody affected. London will never be cowed by terrorism. Terrorism will never win.”

“What’s remarkable about the images we’ve seen is the breathtaking heroism of members of the public who literally ran towards danger not knowing what confronted them,” Khan said. “We do know from the statement given by Assistant Commissioner Neil Basu that there appears to be a device on the suspect. Members of the public didn’t realize at the time that was a hoax device. They really are the best of us; another example of the bravery of Londoners.”

Police said that officers were called to a stabbing at a building on the north side of the bridge at 1.58 p.m. local time.

The BBC journalist John McManus was at the scene, and indicated in a call to BBC News that it was police who fired the shots, after he saw what he thought to be a fight on the bridge. People were trying to hold somebody down, he said, and then two shots were fired. After crowds were moved away by police, he continued, several more shots were fired.

Ambulances and several police vans arrived quickly to the scene, which is near the Shard skyscraper to the south and the City of London financial hub to the north.

London’s Metropolitan Police said on Twitter they were in the early stages of an investigation into an incident at the location.

Police forensic officers work where a man was killed on London Bridge following an incident in London, Friday, Nov. 29, 2019.
AP—Copyright 2019 The Associated Press. All rights reserved

British Prime Minister Boris Johnson urged the public to be “vigilant”. In a statement, Johnson paid tribute to the “extraordinary bravery” of members of the public who “physically intervened to protect the lives of others”.

The Liberal Democrats political party has reportedly canceled plans for a rally Saturday out of respect for the victims of the attack.

In June 2017, three terrorists who were inspired by ISIS mounted a vehicle attack on London Bridge, running down pedestrians in a van before attacking people with knives. Eight people were killed. The attack came days before the 2017 British election; there are currently less than two weeks to go until Britain’s next election.

What Happened in The Hague in the Netherlands?

Dutch police reported on Twitter that multiple people were injured in a stabbing attack along The Hague’s main shopping street on Friday night. The street was busy because of the Black Friday discounts. Per the AP, three people were injured, and authorities have not offered a motive.

Police spokeswoman Marije Kuiper told The AP that it is not clear if the stabbing was a terror attack.

The AP reports that the attack occurred around 7:45 p.m. The AP also reports that pictures from the area show dozens of people being held back by police fencing stopping them reaching the scene what the stabbing occurred.

Dutch police block a shopping street after a stabbing incident in the center of The Hague, Netherlands, Friday, Nov. 29, 2019.
AP—Copyright 2019 The Associated Press. All rights reserved

The Hague police said on Twitter they are looking for a 45 to 50 year old man in a grey jogging suit.

Two Americans were injured in a stabbing last year in Amsterdam, which the AP says prosecutors have described as having a “terrorist motive.”

Write to Billy Perrigo at billy.perrigo@time.com and Madeleine Carlisle at madeleine.carlisle@time.com. 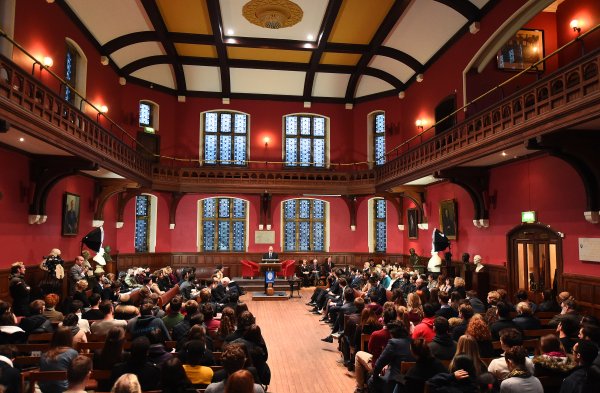