What to Know About the London Attack

London is on high alert following a terrorist incident Saturday night, which police say killed at least seven people and injured 48. The attack comes less than two weeks after 22 people were killed and scores were injured by a suicide bomber at an Ariana Grande concert in the northern English city of Manchester.

Seven people were killed, including the three suspected attackers, and at least 48 others were injured in an attack in London Saturday night, which British police have declared a terrorist incident. A van veered off the road of the city’s iconic London Bridge just before 10 p.m., colliding directly into a crowd of pedestrians, before driving near Borough Market — a lively district of bars and restaurants just south of the bridge. Several men exited the vehicle and began stabbing bystanders, according to London Metropolitan Police.

Mark Rowley, assistant commissioner of the London Metropolitan Police, said 36 people are still recovering in hospitals on Sunday. At least 21 of those injured are in critical condition.

The attackers were wearing “what appeared to be suicide belts” — a belt with explosive devices attached to it worn by suicide bombers — Rowley said. British Prime Minister Theresa May said Sunday these vests were fake, and were worn “only to spread panic and fear.”

An investigation into the incident is still underway.

Three men were shot and killed by police at the site of the incident Saturday. British counterterrorism police arrested 12 people in east London Sunday morning in connection with the attacks.

The Islamic State (ISIS) has claimed responsibility for the attack, though the group has not provided any evidence to support this. Citing the SITE Intelligence Group, AP reports that the group stated on its Aamaq news agency that ISIS “fighters” carried out the attack.

How have the authorities responded?

Multiple response teams were dispatched to the sites of the attack, arriving within eight minutes of receiving the first emergency call.

A bystander was wounded in the police crossfire. The person is currently receiving treatment in the hospital, but is not in critical condition, police said.

“The situation these officers were confronted with was critical — a matter of life and death — three armed men, wearing what appeared to be suicide belts, had already attacked and killed members of the public and had to be stopped immediately,” Rowley said.

Rowley said they are confident that the three men shot and killed were the only attackers, but there is still “clearly more to do” for the investigation.

Police will continue to stay in place in and around the London Bridge and Borough Market, Rowley said. The aftermath will have an effect on travel arrangements through Monday morning, he added, encouraging travelers to use alternative routes if possible.

May convened a meeting of the government’s top-level security committee, Cobra, on Sunday morning, according to the AP.

Speaking outside Downing Street on Sunday, May said the terrorists were not connected by a common network, but said “we believe we are experiencing a new trend in the threat we face, as terrorism breeds terrorism.”

“While the attacks are not connected, they are connected in one important sense: they are bound together by the single evil ideology that is Islamic extremism,” she said. “Defeating this ideology is one of the greatest challenges of our time.”

May confirmed that authorities foiled five terrorist plots during March’s attack at Westminster. She suggested a review on counter-terrorism legislation, the possible lengthening of custodial sentences and working with overseas partners for “international agreements that regulate cyberspace.”

London Mayor Sadiq Khan said the city will not be “cowed” by terror, calling on Londoners to remain alert.

“I’m reassured we are one of the safest global cities in the world,’ he said.

Major political parties including May’s Conservative Party, the opposition Labour Party, the Liberal Democrats and Scottish National Party suspended campaigning on Sunday as a general election scheduled for June 8 nears, the Guardian reported. It is unclear when campaigning will resume.

Police have not released the names of those killed or injured by the attacks yet. However, foreign officials have said one Canadian citizen and one French man were among those killed.

“I am heartbroken that a Canadian is among those killed,” Canadian Prime Minister Justin Trudeau said in a statement.

“We grieve with the families and friends of those who have lost loved ones, and wish all those injured a speedy and full recovery,” he added.

The victims of the attack were taken to five hospitals across the capital, while others with less serious injuries were treated at the scene, according to the London Ambulance Service. At least 21 of the injured victims are in critical condition.

Four French citizens, two Australians and several Germans were among those injured, according to foreign officials from those countries.

One of the attackers yelled, “This is for my family, this is for Islam,” before stabbing her son, the mother of one of the victims told the BBC Sunday.

“He’s got a 7-inch scar going from his belly ‘round to his back,” she said of her son’s injuries. His friend, she said, helped put a makeshift tourniquet on him as they waited for police to arrive to the bar.

“He still doesn’t quite believe what’s happened,” she said from outside the King’s College Hospital in London. “He’s in shock.”

Ken Marsh, the Chairman of the Metropolitan branch of the Police Federation, confirmed in a statement that police officers who responded to the incident were among the injured. “I can confirm that sadly some of our colleagues were among the injured in the attack last night,” Marsh said. “I join all U.K. police colleagues in wishing them a swift recovery,” he added.

One of those officers was stabbed in the face, head and leg when responding to the scene while only armed with a baton, British Transport Police Chief Constable Paul Crowther said, according to the AP. The officer, who has not been named, is in stable condition and joined the police force just two years ago.

“It became clear that he showed enormous courage in the face of danger,” Crowther said.

“The bravery he showed was outstanding and makes me extremely proud,” he added.

What should the public do?

Police have warned the public to keep away from the area and to avoid circulating purported pictures and videos of the attack. Police have also advised travelers to use alternate routes when traveling in London until further notice.

Facebook has activated its safety check, so that anyone who was in the area can inform friends and relatives that they are safe.

Leaders across the globe have responded with an outpouring of condolences, condemning the loss of life and offering assistance. European leaders such as German Chancellor Angela Merkel and France’s new President Emanuel Macron were among those to offer their support.

The U.S. State Department said in a statement that it “condemns the cowardly attacks targeting innocent civilians in London, according to the AP. State Department spokesperson Heather Nauert said the U.S. “stands ready to provide any assistance authorities in the United Kingdom may request.”

U.S. President Donald Trump struck a similar tone late Saturday, tweeting that, “Whatever the United States can do to help out in London and the U. K., we will be there – WE ARE WITH YOU. GOD BLESS! ” His initial remarks were followed by his calls for the enactment of his Administration’s proposed ban on travel from six Muslim-majority countries.

Japan has issued a travel advisory to its nationals currently in the U.K., urging them to avoid what it called potential target sites such as markets, tourist destinations, concerts halls and political events, according to the AP. 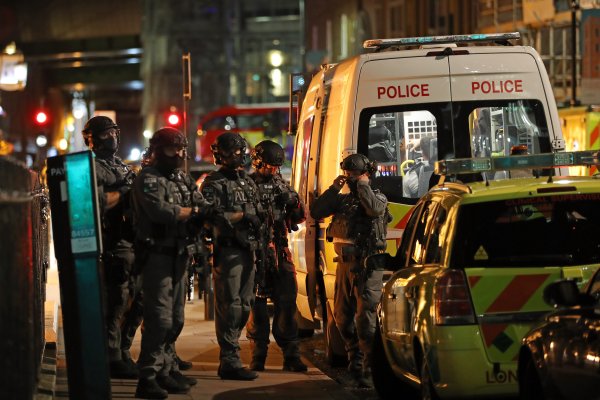 London Unites After 'Potential Act of Terrorism'
Next Up: Editor's Pick