Eric Nam Made It as a K-Pop Star. Now He Wants to Make It Back Home in America

For years, Korean-American singer-songwriter Eric Nam reverse-engineered his songs. He wrote the lyrics in English, then translated the words into Korean to sound more familiar to listeners in South Korea, where he is based. But the U.S.-born artist has taken an entirely different approach to his latest project. Before We Begin, released earlier this month, is Nam’s first all-English album since he debuted as a pop soloist in 2013. With tracks ranging from a vulnerable expression of his experience with physical and mental burnout this year — writing “Love Die Young” was “a process of rehabilitation and catharsis,” he says — to a lead single that celebrates the feeling of an unhealthy relationship ending, the album marks Nam’s first step in shedding the label of a “K-pop artist” and positioning himself as a pop artist in the U.S. market.

Nam grew up in Atlanta. Though he dreamt of being a musician, Nam instead embarked on what he calls the “Asian parents’ dream” — graduating cum laude from Boston College and then receiving an offer to work at Deloitte Consulting in New York City. But Nam uploaded song covers to YouTube for fun, and when they were noticed by the producers of an American Idol-like competition show called Star Audition: Birth of a Great Star 2, he was invited to travel to South Korea to participate. He was in the midst of a gap year in India before starting his job, and, seeing a chance to grasp at his dream, Nam said yes to the opportunity.

“People always ask, why did you go to Korea?” Nam tells TIME over the phone. The main reason, he says, is that he does not think major labels in the U.S. would have given him a chance. In the early 2010s, Asian and Asian-American figures in the U.S. music scene were few and far between. “Even if you look at American Idol, or X-Factor, or The Voice or anything, it was always difficult to see an Asian or an Asian-American make it to a certain point,” he says. He vividly remembers John Park, a contestant who competed on American Idol in 2010, being one of the first Asian Americans to become a semi-finalist. “Everybody was like, oh god, there’s an Asian on TV. That was a huge deal,” he says.

In 2011, Nam placed within the top five on Star Audition and signed with a label that launched his singing career in South Korea. Through a steady stream of mellow ballads and breezy pop tracks, he has carved out a space in the Korean music scene as a soloist with a rich and smooth timbre. And the Atlantan artist has also gained widespread recognition for becoming a TV host and an interviewer for global celebrities visiting South Korea — in part because he is fluent in both Korean and English.

Over the course of an hourlong interview, Nam talked to TIME about his simultaneous missions to advance his own career and open the door for others, what can be done about the lack of Asian and Asian-American representation in the American music industry and the role he hopes to play in furthering the conversation.

TIME: Most of the music you’ve released has been in Korean. Before We Begin is your first all-English project — take us into the decision-making process for this change.

Eric Nam: Coming to Korea and becoming a singer, I always had two big goals personally. One was to be able to make it at some point so that I could do good things — I was always raised with an interest in social impact, philanthropy. The other thing was to be able to take my music and do it on a global scale. Not only because I was born and raised in the States and that’s where I want to bring my music, but because I think representation is something that’s absolutely needed. And at that point when I started music, seven or eight years ago, I really don’t think there were many, if any, Asian Americans or Asians in mainstream media doing music. I felt like with K-pop being so hot, we could leverage that to potentially do something bigger with music in the States that people could latch onto.

What type of social impact do you hope to make?

One thing is to try to push Asians and Asian Americans to the forefront of media representation in the States. Right now, it can seem like a very timely and almost convenient thing to say, but in high school I wrote a thesis on how Asians were portrayed in American media through caricatures of white people dressing up as Asian characters. And when we were younger, the only people I saw on TV who looked like me were Jackie Chan, Lucy Liu, and that was about it. But Asians are incredibly diverse, we come from so many different countries, so many different backgrounds, and it’s a shame that we haven’t had the depth or the breadth of expression and representation.

I may not be able to be the person that makes it, and becomes an Asian-American pop star. But hopefully that moves the culture forward. And it becomes one more person that some kid can look up to and say “Eric did it, let me try it.”

What structural changes do you think need to happen for Asians and Asian Americans to break into the U.S. music industry?

First of all, I really hope that there are younger kids who aren’t afraid to pursue music. For so much of my youth, it was never an acceptable or realistic opportunity. My parents, or Asian parents in general, they’re like, “You should be a doctor, a lawyer, or a banker” — all that’s laid out. As a kid that’s what I bought into, which is why I ended up going the corporate route initially. I think with more people who are making moves these days, be that K-pop or Asians or Asian Americans in R&B and hip-hop, I hope that allows people to dream and to have the courage to try things out. When we have that and we have a talent pool that has been honing its crafts for years, it’s easier for labels and management teams to say, this kid has really developed something that we think an entire global audience can latch onto.

The second part is major labels really being able to think ahead about moving culture forward. I think it’s an issue of taking risks, of being willing and able to embrace the potential to change culture. Once BTS and Blackpink kind of blew up, and once they found distribution, all the other labels were like, “Oh, we need to do this too.” But then it became a land grab and everybody has tried to sign the next big K-pop group, which is cool but it almost feels like a big numbers grab of, these kids have 10 million followers, we should sign them. I really want to challenge them to think long-term.

At the start of my career, that is what I was — a K-pop artist. It defined me for the past seven, eight years. What I think about it now is, I’m a K-pop artist, but I’m also a pop artist.

The only reason that I would try to go beyond the K-pop label is because I feel like the mass audiences have a preconceived notion and stereotype of what K-pop is. So it automatically boxes me in. In Korea, I’m not a K-pop artist, I’m just an artist. I’m a singer-songwriter here, it just happens that the music travels well and I do stuff outside [of Korea] and so they call me a K-pop star. In the States I’m trying to position myself as an English, American pop artist. I embrace my K-pop roots and where I started. Korea and K-pop was the place that gave me the opportunity to become a musician, to develop a set of skills. But now it’s about how do I move and grow beyond the boundaries of it.

What are some of those boundaries?

People think of K-pop, and they think of a whole bunch of dudes, or a whole bunch of girls, with crazy-colored hair, wearing flashy clothes and a lot of makeup, and doing great choreography. While fans love it, people who don’t understand it, it’s always been like, “Why do you guys wear makeup, why do you guys have this hair, why do you dress like this?” It’s always been looking at us as “other,” as a foreign import. It’s just a different standard of presentation and beauty. I think it should be respected.

But then I look at myself, I’m not seven guys on stage, I don’t have purple hair— yet, maybe one day I will — and I think when it comes to the music, they have an expectation that it’s overly produced, highly-synthesized factory music, which is completely not the case for me. I just don’t want to have to answer to those preconceived notions. I don’t want to bind myself to them, I want people to hear my music and say, “I don’t know who this person is,” and I could be black, white, Latino, Asian — it doesn’t matter, but it’s just a great pop song.

Looking back at your career, in what ways do you think you’ve pushed the envelope when it comes to increasing visibility for Asians and Asian Americans in the music industry?

That’s something I’m still working on, I don’t know if I really have made an impact yet. But I think, even just doing these types of interviews and telling my story, is hopefully a testament in some ways. One of the most rewarding things for me is when I go on tour, I run into people in the streets of New York, L.A., or even Korea, Asian-American people who are like, “Thank you.” I’m like, “For what?” They’re like, “For doing what you do.” And that’s literally been a repeated conversation that I have. Or, ”Thanks for doing what you do because you had the perfect Asian-American, Asian parents’ dream, and you still said no, and you pursued something completely different, so thank you for that.”

In your ideal world, what would “enough” representation for Asians and Asian Americans in mainstream pop look like?

My dream is if we get to a point where there’s a bunch of everybody. It’s just a complete melting pot of music that is more representative of not only the States, but the world. Because American music, American culture, is such a mainstay in homes across the entire globe, I feel like it should represent that. It’s just everybody’s talents mixed together, but race, ethnicity is not an issue. It’s just good music for the sake of good music. 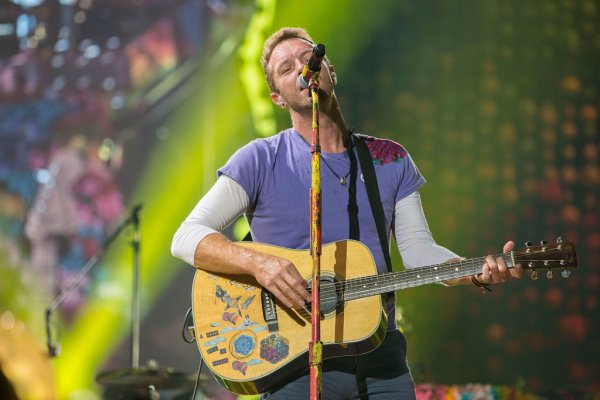 The Best Songs of the Week: Coldplay, Maggie Rogers, Juanes
Next Up: Editor's Pick