‘I Waited Eight Years.’ Meet the K-Pop Superfans Who Spent Their Savings to Meet Their Favorite Idols

In her room at the AC Hotel in Times Square, Hayley Baye selected her outfit with purpose. For her first time at KCON, the Korean culture convention featuring performances from some of K-pop’s buzziest groups, the 24-year-old executive assistant dressed up as Wooyoung — a charismatic member of the eight-piece boy group ATEEZ. Recreating Wooyoung’s look from the act’s new music video “Illusion,” Baye wore a top with red and blue stripes, white shorts and a pearl necklace. Two golden ship wheels dangled from her ears, a tribute to pirates — the motif present throughout ATEEZ’s videos.

The K-pop superfan, who lives in New Orleans, had flown to New York for the opportunity to see nearly a dozen acts in one weekend at KCON NY, held this year at Madison Square Garden and the Jacob K. Javits Convention Center. Baye spent $1,700 to purchase a VIP “Diamond” ticket for perks including a special meet and greet with one group, an exclusive red carpet event and a designated floor section to watch performances. That level of access costs far more than standard tickets, which run up to $150 for the daytime convention and $360 for the evening concerts. “I definitely would not be able to do this if I was in high school, or even still in college,” Baye said. But the chance to indulge her passion, up close and personal, was worth the expense.

KCON, which began as a one-day event in California in 2012, expanded to the New York metropolitan area in 2015. The event has grown more than tenfold since then: While 10,000 people attended in its first year, the two locations attracted 147,000 in 2018. This dramatic increase reflects a surge in K-pop’s global popularity, spurred by the success of the septet BTS, which became the first Asian act to reach 5 billion streams on Spotify. Across all acts, meanwhile, streams of K-pop have grown by approximately 65 percent every year since 2015 on the streaming service. Around that time, music agencies in South Korea appeared to make a harder push to get their artists’ songs into ears in the Western market. Artist CL from 2NE1, one of the best-selling girl groups of all time, launched her solo career in the U.S. in 2015, and Big Bang, one of the first K-pop boy groups to gain international attention, made headlines with a world tour that included massive American venues like the Staples Center.

Perhaps not incidentally, that was also the year Baye discovered K-pop. She had been an avid fan of groups like One Direction and 5 Seconds of Summer, but those groups took a break from releasing new music (in the case of the former, a seemingly permanent one). On social media, many of her fellow fans began filling that void with K-pop, whose groups release new music as frequently as two or three times a year. “I was like, I totally get it — these guys are gorgeous, the music itself is a bop, the visuals are on point,” Baye explained. “But the language barrier was something that really prevented me from getting into it any sooner.” It wasn’t until she heard one particular song, MONSTA X’s “Hero”— an anthemic EDM track with a video featuring rooftop choreography shot by drones — that a casual interest developed into a dedicated passion.

Baye, who stopped taking an aerial acrobatics class she loves in order to put away an extra $100 per month, was in good company at KCON, where many attendees made similar trade-offs in order to be there: Lara Levesque, 23, gave up free weekends in June to work seven days a week at two jobs so they could afford the $900 “Platinum” ticket — also a VIP experience but with fewer benefits. Danielle Davis, 22, gave up sleep, taking on 4 a.m. shifts at a grocery store.

Levesque opted for the cheaper option to travel from Quebec City, where they live, to Manhattan. The trip by bus and train took more than 12 hours, but they saved hundreds by sticking to ground transportation. Still, the expense was no small consideration, with the ticket, accommodation and transportation adding up to roughly $2,000. “You never know if they’re going to come to Canada or not,” Levesque explained. Davis knows the feeling. Her favorite group, the five-member ensemble NU’EST, performed as a complete group in the U.S. for the first time since 2015 at this year’s KCON. Back then, she was a high school student living in another state and could not attend the concert. “I waited eight years,” said Davis, who has followed NU’EST since 2011. “This is the moment I’ve been waiting for for a third of my life.”

As someone who now follows multiple groups closely — a dedication described as “multifandom” — Baye has found keeping up with her passion to be an increasing financial challenge. In the first half of 2019 alone, the number of U.S. tours by South Korean artists has already surpassed the total number in 2018. New Orleans is rarely included on K-pop tours, which means Baye often has to pay additional costs for transportation and accommodation in order to attend a concert. When a group visits a nearby city on a weekday, she usually misses the event, not wanting to take days off from her job at a professional services firm. Having missed some of her favorite groups’ American tours, she said, “I figured that KCON would be the best way to see them all.”

Perhaps the most sought-after interaction at KCON is the “hi-touch,” the chance for a high-five with K-pop artists. All Diamond ticket holders, along with some Platinum ticket holders and other fans who purchased passes, line up and greet every member in a group for a series of fleeting interactions. Despite the brevity of the exchange, the “hi-touch” is widely considered to be one of the closest forms of engagement between idol and fan. Because fans often spend hundreds of hours watching K-pop artists through a screen in music videos, vlogs and variety shows, these interactions are perceived as a step up from an entirely digital experience.

“They make me happy, and I feel like I need to tell them that,” Baye said about ATEEZ, the group she was most excited to see at KCON. Prior to the event, she had participated in two “hi-touches” with the group at their first U.S. tour in March. She was ready for her third.

At ATEEZ’s “hi-touch” session, Baye waited in line with excitement. She stepped onto the stage, beaming as the group’s new songs played in the background and fans sang along. “Hi San!” she said enthusiastically to one member as they high-fived each other. “I love your dancing. It’s so good!” she exclaimed to another. Wooyoung, Baye’s favorite member and the one whose outfit she had recreated for this moment, responded energetically, “Thank you!” “I have a couple of my friends recording me at their seats,” Baye said, “so I can keep the video forever.” 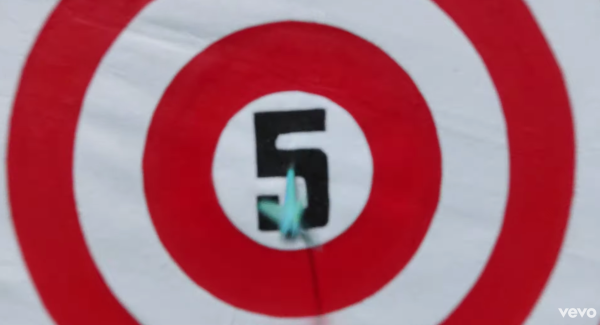 Taylor Swift's New Song 'The Archer' Got Fans Prowling for All of the Clues
Next Up: Editor's Pick