We Trust the Navy SEALs to Protect America. Trump Should Trust Them to Judge Themselves

President Donald Trump’s interference on military justice is without precedent in American history, and represents a disturbing disagreement in civilian-military relations.

On Sunday the Secretary of Defense Mark Esper asked for and received the resignation of the Secretary of the Navy Richard Spencer as a result of his handling of a personnel matter involving a Navy SEAL. Exactly who did what to whom is a bit unclear at the moment. But what is clear is that none of this needed to happen.

In the past, Presidents have occasionally issued pardons to individuals adjudicated by military justice (as they do for civilians), but they have never reached into the process while events are still unfolding. Doing so is deeply unsettling to military leaders, showing a complete disregard and indeed a disrespect for the military system of justice, called the Uniformed Code of Military Justice.

The President interfered in the Navy’s chain of command to significantly reduce the punishment of SEAL Chief Petty Officer Edward Gallagher. It was a complicated case, full of malfeasance by the Navy JAG corps which was caught attempting to bolster its case by a variety of ill-advised maneuvers. Certainly, that was part of the reason a military jury acquitted Chief Gallagher on multiple serious charges, including killing an unarmed detainee in Iraq with a hunting knife.

But the bottom line was clear: a jury of Chief Gallagher’s peers – mostly special forces operators – voted to convict him of posing with an enemy corpse and therefore strip him of his Chief’s anchor. President Trump intervened to restore the rank, but the Navy – following its well-established and appropriate protocol – moved forward to evaluate whether or not to allow Chief Gallagher to retain his warfare pin, a gold trident worn over the left breast of the uniform. My bet is that, left to their own devices, his peers would have said “no” if given the choice to allow him to retain his pin or not. These symbols are immensely hard to win. A SEAL pin sets its wearer aside, and becomes a significant part of that sailor’s self-image.

The 76th Secretary of the Navy was Richard Spencer, a popular former US Marine helicopter pilot and leader. The Secretary had said he intended to press forward with the standard administrative protocol to determine whether Chief Gallagher deserves to continue to wear the pin: a board of SEALs would make this determination after weighing all the evidence. After learning that such a board would take place, the President issued a tweet essentially saying that the Navy will be directed to allow the Chief to keep his pin.

Rejecting the idea of “chain of command by tweet,” Spencer indicated he wanted a written order to cancel the board – supporting the collective judgment of the SEAL community and in particular the judgement of its commander, Navy SEAL and combat veteran Rear Admiral Colin Green. But apparently before that could happen, Secretary of Defense Mark Esper fired Spencer, allegedly for having back channel conversations with the White House suggesting that if they let the Navy go ahead with the review board they would get the result they wanted.

This is puzzling because the case for removing the trident was strong. By overriding the Secretary of the Navy and the Chief of Naval Operations (as well as the Secretary of Defense and the Chairman of the Joint Chiefs of Staff) in support of someone who has disgraced his uniform, Trump sailed into uncharted territory. It is hard to imagine any other President taking such action over such unified military advice. Trump’s military advisors correctly worry about the corrosive effect such a move would make on the credibility of the chain of command; battlefield behavior by other military personnel in similar circumstances, and perceptions about the ethical conduct of the US military globally. Everyone agrees Trump absolutely has the legal authority to take this course of action – but that doesn’t make it right.

In addition to firing Spencer, Secretary Esper has cancelled any plans for a review board. The smart course for all concerned would have been to conduct the board, leaving the decision in the hands of a jury of peers – Navy SEALS. None of us who aren’t special forces, even including those like me who have served in the armed forces, are qualified to judge Eddie Gallagher in this regard. We cannot fully understand the crucible of close combat he encountered again and again. I respect that, and so should have his entire chain of command. He has been accused and judged by peers. They should have had the final say on whether he continued to wear that sacred pin – not a President with little understanding of the military, let alone of the code of conduct it must honorably follow in the harshest arenas of modern war. 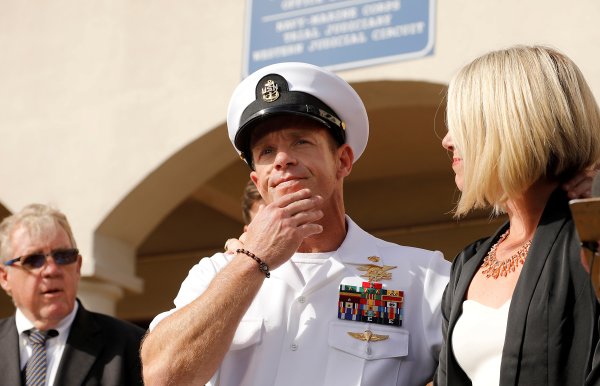 President Trump's Pardons of Soldiers Shows How Little He Knows About War
Next Up: Editor's Pick