After Contentious Trial, Navy SEAL Edward Gallagher Found Not Guilty of the Murder of an ISIS Fighter

By Josiah Bates and Tara Law

After a two-week-long trial, a military jury in San Diego, Calif. has found Special Operations Chief Edward Gallagher not guilty of charges relating to the murder of an ISIS combatant while the SEAL was stationed in Mosul, Iraq.

Gallagher was found not guilty on counts of premeditated murder and attempted murder (related to other incidents in which he is alleged to have shot at Iraqi citizens), and only charged with one count regarding “the violation of posing for photographs with a dead war casualty,” according to the Associated Press. This body is believed to be that of the combatant who Gallagher was accused of stabbing.

Unlike criminal trials that involve civilians, military tribunals are based on charges brought up by military officials, in this case Gallagher’s superiors. The court proceedings are considered ‘in-house,’ with a jury of enlisted military personnel; in Gallagher’s case, they are being overseen by a Navy judge. Here’s what you need to know about the case, and its implications for the closed-ranks culture often believed to surround elite U.S. troops and their missions.

Who is Edward Gallagher?

Gallagher, 40, joined the military in 1999. He first trained as a medic, before serving as a Marines sniper scout and explosives expert. During 19 years of service as a Marine and later a Navy SEAL, Gallagher served eight tours of duty and received two Bronze Stars.

During his service, Gallagher has also been the subject of multiple military investigations. In 2010, he was investigated for shooting a young girl in Afghanistan, but no charges were filed against him, according to The New York Times. He was also accused of trying to run over a Navy police officer in 2014 after being pulled over in a traffic stop. That incident, too, resulted in no charges.

What were the allegations against Gallagher?

According to testimony from fellow soldiers, in May 2017 Gallagher’s SEAL team helped to clear an area outside of Mosul following an airstrike.

An ISIS fighter was apparently injured in the strike, the Associated Press reported. SEAL Dylan Dille, who was present during the incident and testified during Gallagher’s pre-trial, said that the ISIS member looked like a child. “He looked about 12 years old,” Dille said.

Other soldiers testified that Gallagher began to treat the fighter’s injuries with the assistance of another SEAL, Craig Miller, according to the Associated Press. Miller later claimed that he saw Gallagher stab the teen multiple times in the neck and body. “Right here on the right side of the jugular vein,” Miller said, identifying the spot on his body, the Associated Press reported. After the alleged murder, Gallagher took photos and posed with the body, along with some other SEAL members. He is said to have texted some of the photos to friends. One image, which was found on Gallagher’s cellphone, was showed to the jury during the trial’s opening statements on June 17. (Gallagher’s superior, Lieutenant Jacob Portier, also faces charges for allegedly allowing Gallagher to pose for a re-enlistment ceremony, and take additional photos thereof, with the body as a prop.)

Senior Prosecutor Navy Cmdr. Jeff Pietrzyk said during his closing arguments that Gallagher’s own text messages showed that he was guilty, the Associated Press reported. He said that while the deceased ISIS fighter would have “done anything in his power” to kill Americans, the U.S. forces are expected to behave differently.

How did Gallagher plead?

Not guilty. Gallagher’s defense attorney, Tim Parlatore, had previously said that Gallagher was trying to treat the captive for a collapsed lung, and that he made an emergency cut in his throat to intubate and clear the airway. Parlatore argued there is no evidence that supports the murder charge, and that the entire case against Gallagher is built upon ill feeling from junior SEALs in his platoon who resented his leadership and want him booted from the military. Another of Gallagher’s attorneys previously claimed the teen had likely died from injuries sustained in the airstrike.

“This case is not about murder, it’s about mutiny,” Parlatore said during his closing arguments, according to the Associated Press.

Parlatore criticized the prosecution’s case at a press conference following the verdict.

“This should never have gotten to a trial the way that it did. Posing for a photo like that- that’s something that’s normally handled at a non-judicial punishment,” he said.

While acknowledging that Gallagher had stabbed the teen, Special Operator Corey Scott testified during the trial that he was the one who killed the teen himself by deliberately blocking the young man’s breathing tubes, which he said asphyxiated the boy. Scott described this as a mercy killing, and argued he felt the teen would have been tortured when detained by Iraqi police due to his ties to ISIS. Scott, who said he does not want to see Gallagher jailed, was reportedly granted immunity as a witness for the prosecution, according to The San Diego Union-Tribune.

Following his testimony, prosecutors accused Scott of lying and said that he never revealed this version of the incident in previous conversations.

Gallagher’s family has been outspoken since the case became public, continuing to profess his innocence. His wife, Andrea, has made several public appearances, and shared her story on social media.

“Despite the horrific circumstances we have just been so thankful for the support of fellow Americans and patriots who can identify that the dynamics of what is going on here at the hands of the Navy is not right,” she said in May 1st video post.

His brother, Sean Gallagher, appeared on MSNBC, questioning the evidence in the case. “While these accusations have been levied by a few, there are more than four times as many in Eddie’s platoon who were there at these incidents that say it never happened,” Sean Gallagher said.

After the verdict was announced, Andrea Gallagher said that she felt the Navy had jumped to conclusions about her husband.

“He is a righteous and noble individual and his name has been smeared and slandered and dragged through the mud,” she said.

Why has the case become a political flashpoint?

President Trump has raised the subject of military pardons on multiple occasions, and has also spoken publicly about Gallagher’s case specifically.

In March, Trump called for Gallagher to be moved to “less restrictive confinement,” after 40 Republican members of Congress signed a letter that called for the Navy to free the chief while he waited for his trial. His family claimed that he was being held without medical treatment for post-traumatic stress disorder, the Navy Times reported.

Trump’s intervention saw Gallagher moved out of a naval brig where he had been held since September 2018. He was later freed from confinement entirely on May 30, after a judge said there was interference by the prosecutors on Gallagher’s right to legal counsel.

The Trump administration requested paperwork in May that would be needed to pardon multiple military members. Among them was Gallagher’s case, the New York Times reported. While speaking with reporters in May, Trump confirmed that he was “looking at a lot of different pardons for a lot of different people,” but did not mention Gallagher’s case specifically during the presser.

Some other Republicans have come to the defense of Gallagher. While appearing on the Barstool Sports’ Zero Blog Thirty podcast, California Republican Rep. Duncan Hunter said that while he served in the military he posed for pictures similar to the ones Gallagher is alleged to have taken. “I’ve taken pictures just like that when I was overseas,” Hunter said in the interview. “Eddie did one bad thing that I’m guilty of too, taking a picture with a body and saying something stupid and then texting that.”

According to the New York Times, Hunter has also said he has video evidence that would clear Gallagher, but that footage has not been released. Hunter’s office did not respond to TIME’s request for comment on the trial’s proceedings. 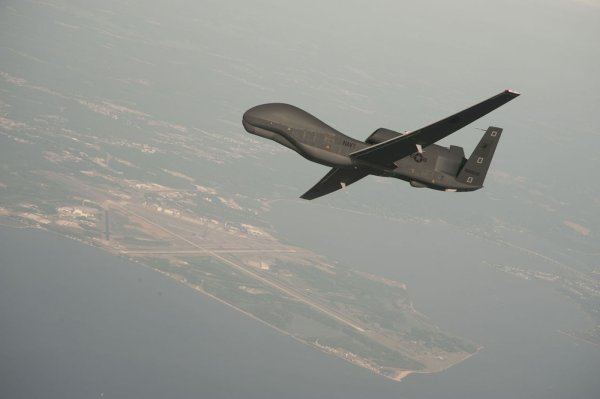 What to Know About the U.S. Drone Shot Down by Iran
Next Up: Editor's Pick