This past Friday President Trump signed pardons for Army First Lieutenant Clint Lorance and Army Major Mathew Golsteyn, and signed an order directing the promotion of Special Warfare Operator First Class Edward Gallagher to the grade of Chief Petty Officer. The White House press release announcing the decisions in these cases concludes with a quote from Trump, “when our soldiers have to fight for our country, I want to give them the confidence to fight.” In the face of battlefield misconduct, however, the final statement from the White House is a perplexing one and begs the question: from where do we draw our confidence to fight?

Pete Hegseth, the Iraq war veteran and conservative Fox & Friends commentator, has said the president believes, “The benefit of the doubt should go to the guys pulling the trigger.” Fair enough, war is complicated, a realm where the toughest decisions don’t appear in black or white but in confusing shades of gray. However, in these cases the issues are, for once, very clear. Lorance was found guilty of murder and Golsteyn has confessed to murder—twice. With regards to Gallagher—who posed for a photo over the body of an executed ISIS prisoner and texted it to a friend with the caption: “Good story behind this, got him with my hunting knife”—Trump is trying to strike the pose of being sympathetic to the warfighter while simultaneously undermining Navy commanders—the very warfighters he allegedly supports—who have petitioned both to demote Gallagher and to strip him of his SEAL qualification in order to maintain good order and discipline within Naval Special Warfare.

The confidence to fight doesn’t come from laxity but rather from discipline. When unit discipline breaks down—when lieutenants start shooting unarmed civilians (in the case of Lorance), when special operators take matters into their own hands and begin executing prisoners (the case of Golsteyn, and, I would contend, Gallagher)—the confidence to fight evaporates. In fact, you aren’t fighting anymore. You’re doing something altogether different: you’re killing.

Clearly, Trump doesn’t understand this difference. This past October, he took to Twitter to discuss Golsteyn’s case, writing, “We train our boys to be killing machines, then prosecute them when they kill!” Is that really how Trump views the U.S. military? As a collection of “killing machines”? When I returned from Iraq and Afghanistan, I was often asked by well-meaning people whether or not “I had to kill anyone over there.” My response evolved to: “If I did, you paid me to.” Which was more often than not met by confusion as opposed to the intuitive understanding that it was American tax dollars that had sent me to war, and thus American citizens who shared in the complicity of whatever killing I had done.

I can think of no clearer evidence of America’s civil-military divide than President Trump’s decision to pardon Lorance, Golsteyn, and Gallagher. Even if one were to assume the pardons weren’t a cynical political move designed to pander to his base, they would represent an extreme misreading of how to stand in solidarity with our service members.

A week ago, I sat on a panel where the question came up of whether “Thank you for your service,” was a sentiment appreciated by veterans. My co-panelist felt it held us apart from society at large, giving veterans an awkward “otherness.” My view was that it is a genuine expression of gratitude that should be appreciated. What both of us agreed on was that in the past few decades norms of behavior towards veterans have changed for the better in this country. Thankfully we won’t regress to the days of the Vietnam War when citizens spat on soldiers returning home. Today, we all agreed, no one defiles the uniform and those who wear it.

Norms have changed. We’ve discovered a new way to defile the uniform. Today, we allow murderers to wear it while being lauded as heroes. They tell their stories on cable news specials. This new norm should come as no surprise. In 2016, then-candidate Trump announced in Iowa his personal view of killing and death. “I could,” he said, “stand in the middle of 5th Avenue and shoot somebody and I wouldn’t lose voters.” 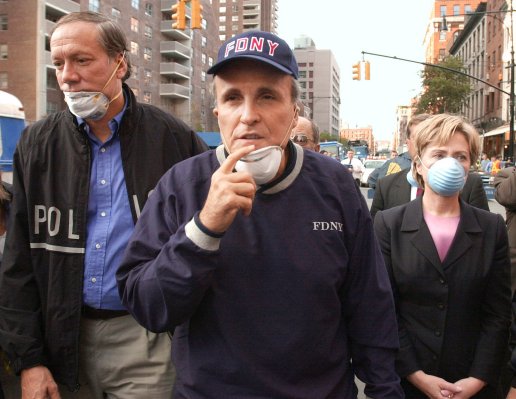 Rudy Giuliani Once Fought Corruption, Now He Is Embroiled in It
Next Up: Editor's Pick