Early on Friday morning, Solange Knowles released her fourth studio album, When I Get Home. The 19-track album, which the singer and performance artist teased with a mysterious social media roll-out throughout the week, features star-studded collaborations, references to her hometown of Houston, Texas, interludes from feminist writers and production from her teenage son, Julez.

The project, a follow-up to her critically acclaimed 2016 album, A Seat at the Table, plays like a love letter to the rich culture of the black diaspora, looking to both the past and the future for inspiration. This is most apparent in the incredible range of artists she works with, who range from respected industry veterans like Raphael Saadiq and Pharrell Williams to forward-thinking stars of the moment like Standing on the Corner, Earl Sweatshirt and Playboi Carti. But make no mistake about it — this is Solange’s show, from concept to production.

Here’s everything you need to know about Solange’s When I Get Home album.

When I Get Home pays homage to Solange’s Texas roots.

It’s not just the title of Solange’s new album that honors her Houston, Texas, roots. Texan influence is felt throughout the album, from the tracklist (which references different parts of Houston, including a freeway exit) to the samples (which include a clip of famous Houston natives and siblings Debbie Allen and Phylicia Rashad). Likewise, the lyrics also demonstrate’s Solange’s deep love for Houston; in the song “On the Way to the Show,” Solange sings about candy paint, a type of car finish associated with the flashy slab scene (slabs being “slow, loud and bangin’” cars customized to the max), which started with the black community in Houston.

The message that Texas is home is especially felt when Solange touches on the personal. An interlude on the album is credited to her son Julez, while a pre-release Instagram post shouted out Houston rapper and early collaborator Mike Jones, with a caption that referenced Jones’ predilection for handing out shirts with his cell phone number on the back.

Solange is also planning to host several “album experience” events with her creative agency Saint Heron in Houston on Sunday.

The album had a highly strategic rollout.

While Solange’s fans had been eagerly anticipating a new project since last fall, when she announced that she was putting finishing touches on an album, the singer kept most of the details under wraps until the week of its release. Earlier in the week, Solange created a website via the early-aughts social-media platform and black online community Black Planet, where she debuted media, images and cryptic quotes about the project and teased the possibility of new music. The website gave visual clues that Solange’s project might honor her Houston roots with images of black cowboys and cowgirls, rodeos and Solange herself wearing cowboy boots, along with text that read: “I made the pilgrimage back to the pagoda of third ward houston to answer this.”

However, eagle-eyed Solange fans will recognize that the singer left clues about the album on social media in the two years leading to the release of When I Get Home. In 2017, Solange took selfies with the Wopsters — Gucci Mane and his wife Keyshia Ka’oir; Gucci features prominently on the album’s track, “My Skin My Logo.”

Likewise, Solange carried a bottle of Florida water in a bejweled net bag to the 2018 Met Gala and wrote about using the spiritual substance to feel “renewed” in an article in Dazed the same year. On the new album’s interlude “Nothing Without Intention,” she samples spiritualist Goddess Lula Belle’s “Florida Water For Cleansing and Clearing.”

The album expands on the disparate sound of A Seat at the Table.

Like A Seat at the Table, Solange’s new album draws from music across the black diaspora. In October, she discussed the sound of the record with T magazine: “There is a lot of jazz at the core,” she wrote in an email. “But with electronic and hip-hop drum and bass because I want it to bang and make your trunk rattle.”

The lush keyboard chords on ballads like “Time (is)” and “Dreams” are indebted to jazz, with the latter featuring production from the jazz drummer Jamire Williams. There are Moog keyboards and springy, ambling basslines reminiscent of ’70s soul. Solange layers her voice and others in cascades of harmony and also employs trap cadences on more upbeat songs. On “Almeda” and “My Skin My Logo,” she recruits the rappers Playboi Carti and Gucci Mane, respectively, who deliver blithe verses.

The collaborations include marquee names but mostly come from the hip-hop avant-garde.

The credits are packed with prominent names, from Pharrell to Raphael Saadiq to Dev Hynes — who co-produced her 2012 EP True. But one of the album’s most frequent collaborators is Standing on the Corner, a Brooklyn-based collective with freewheeling, avant-garde impulses. Their most recent release, Red Burns, consists of two 30-minute “sides” that pull together jazz, soul, hip-hop, poetry and mock radio broadcasts. They have closely collaborated with the rapper Earl Sweatshirt, who revels in murky, anti-grid production and also produced the outro on “Dreams.”

Odd Future, the Los Angeles hip-hop collective known for their grisly sense of humor, transgressive aesthetic choices and strong communal spirit, has a strong presence on When I Get Home. Sweatshirt is a member, as is Tyler the Creator, who appears in dense murmurs and ad-libs on “Time (is) and “My Skin My Logo.” Steve Lacy, the guitarist for the exploratory funk band The Internet — which is led by Odd Future member Syd — contributed to three songs. And three tracks feature production from Chassol, a French composer who is also credited on Blonde, the revelatory album by Odd Future member Frank Ocean.

The lyrics deal with strong feminist themes and a celebration of blackness.

A Seat at the Table was hailed as an ode to the strength and beauty of black women’s experiences, and When I Get Home appears to continue in this vein. Drawing on a nuanced, multi-dimensional view of black womanhood, Solange’s samples might speak as loudly as her lyrics when it comes to parsing out desire and love free from restraint, fear or respectability politics: A clip from Alexyss K Tylor, a viral sex expert known for irreverent show Vagina Power, flanks an earnest poem from the late Pat Parker, a lesbian feminist poet and activist. Both are homages to black women who live and love on their terms.

In an equally candid manner, Solange also celebrates her blackness, lacing her lyrics with references to both black struggle and black excellence. “Dollars never show up on CP time / I just wanna wake up on CP time,” she sings on “Binz,” referencing a stereotype about African Americans and lateness. On “Almeda,” she celebrates black and brown things (“Brown leaves, brown keys/ Brown zippers, brown face/ Black skin, black braids / Black waves, black days,”) in a flow reminiscent of the ones used in both A$AP Mob’s “Black Card” and Jay-Z and Kanye West’s “Who Gon Stop Me.” 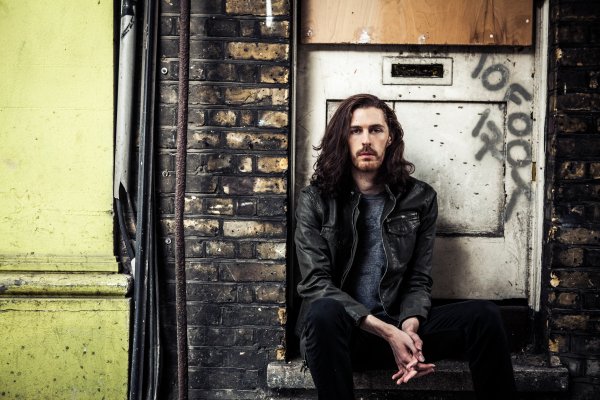 Hozier Finds Beauty in the 'Wasteland' on His New Album
Next Up: Editor's Pick