For an artist synonymous with mid-century pastiche, Lana Del Rey captures American life in 2019 with uncanny precision. Released in advance of her new album Norman F—ing Rockwell!, piano ballad “The greatest”—genuinely the greatest song she’s recorded—is an anthem for a seemingly inevitable apocalypse. “Nobody wants you before the fall,” she laments, stretching out the final word ominously, amid verses that enumerate the things she misses: Long Beach, New York, idleness and, somehow most chillingly, rock ‘n’ roll. She reminds us of how onetime heroes like Kanye West have fallen, how our phones deliver fake news about impending nuclear annihilation and of how Del Rey’s beloved L.A. is always on fire these days. Yet she’s made her peace with the End Times: “The culture is lit, and if this it, I had a ball,” she sings, teasing out the latent foreboding in using “lit” as slang for “exciting,” her voice suddenly high-pitched and urgent.

The song encapsulates Del Rey’s exhausted yet engaged perspective on Norman, the first front-to-back masterpiece of a decade-long career that spans five generally well-received albums and survived years of controversy among music’s gatekeepers. In those early days, following her 2011 breakthrough single “Video Games,” her aesthetic combined the most obvious touchstones of Old Hollywood glamor and postwar Americana with the artificially grainy sunset porn of Instagram. Her songs layered pouty vocals over bland hip-hop beats and movie-melodrama strings; the lyrics were all stars, stripes and James Dean. To many critics, myself included, it felt contrived—and shoddily so. But what appeared at first to be a half-baked schtick was actually a rough draft of a persona that would gain unexpected depth as Del Rey refined it and then, a few records later, as the American nostalgia she both embraced and critiqued took on a darker cast within the culture.

“I was one thing, now I’m being another,” she intones on Norman’s disarmingly minimal “Bartender.” And it’s true; throwback though she may be, the Lana Del Rey character changes with the times. In terms of her sound as well as her image, the new album continues her journey from 1950s Hollywood to less glitzy, more bohemian satellites of L.A.—Venice Beach, Long Beach, Laurel Canyon—and the sun-bleached folk music that took root there in the late ’60s and early ’70s. Vignettes about making art of all kinds suffuse tracks bound by recurring phrases and place names. Even more than 2017’s sometimes-brilliant Lust for Life, which muddied Del Rey’s vision with too many stunt collaborations, the record looks sorrowfully upon the present from the vantage point of an equally troubled but more hopeful era half a century in the past.

The Lana Del Rey character has always had a spectral quality, like Marilyn Monroe coming back to sing about her own death. But there’s unique resonance in the way her new album haunts the listener. On “Venice Bitch,” a 10-minute voyage to the bottom of the Pacific Ocean with a gloriously noisy back half, she delivers one of her indelible one-liners—“You’re beautiful and I’m insa-ay-ay-ane”—the way an old-time movie ghost might greet her widower’s terrified new wife. Producer and co-writer Jack Antonoff, who’s worked with Carly Rae Jepsen, Lorde and, most recently, on Taylor Swift’s Lover, has a talent for distilling artists’ personalities, making them sound more like themselves than ever before. For the majority of Norman, his spare piano and acoustic guitar arrangements allow Del Rey to channel the spirits of timeless weird-girl singer-songwriters from Joni Mitchell to Fiona Apple. (As a straight-faced, surprisingly good cover of Sublime’s “Doin’ Time” confirms, her canon of historical influences now reaches into the ’90s—in case you hadn’t realized the 20th century is now entirely in the rearview.)

References to pop-cultural touchstones of decades past are Del Rey’s signature; this time, though, her callouts to Led Zeppelin, Leonard Cohen and Rockwell weigh on the present like broken promises. “I miss the bar where the Beach Boys would go/Dennis’s last stop before Kokomo,” she sings, evoking Dennis Wilson’s death by drowning at 39, on “The greatest.” Nostalgia for rock‘n’roll is nostalgia for a youth culture that could still muster some energy.

Despite her affection for proper nouns—not to mention that time she put a hex on Donald Trump—“Kanye West is blond and gone” is the closest Del Rey gets to making her political views explicit here. (Her recent song in support of gun control, “Looking For America,” was released as a one-off single.) That’s for the best, and not just because the past three years of public life have inspired enough pedantic art for three lifetimes. Amid the MAGA regime, as the 34-year-old singer’s generation faces the increasing likelihood of climate catastrophe within its lifetime, her obsession with American detritus has its own kind of poignancy. Del Rey’s early, not always revelatory, fixation on women, men and romance hasn’t totally given way to stirring imagery of a nation in decline; Norman’s two weakest tracks, “Love song” and “Cinnamon Girl,” retread that ground.

For the most part, though, it’s clear she’s occupying a different headspace now than she was in during the Obama years. “Under that administration, it felt like a dream had come true-ish and we could focus on the arts and it was a time of reprieve and we didn’t have to talk about certain things,” Del Rey recalled to the New York Times, in a telling oversimplification. Once a rebel without much of a cause (to use a metaphor the singer might appreciate), she’s become pop music’s leading philosopher on what it means to be an American at a time when that question is tearing the country apart. Yet she’s more interested in recording how it feels to live through this decline than in telling listeners what to think about it. When she opens the album with an exasperated “Goddamn, man-child,” on the title track, it’s fair to assume she’s not only talking about some anonymous ex.

Heartbreaking as it can be, Norman F—ing Rockwell isn’t all failed relationships and doomsaying. Either Del Rey has gotten funnier over the years or her odd, self-aware sense of humor has become more legible; “Doin’ Time,” a song that borrows heavily from the Gershwin standard “Summertime,” is Peak Lana—a turducken of a 20th-century cover that thrums with Southern California pride. The album title itself reads like it came from a Lana Del Rey album title generator.

Most reassuring of all, she chooses not to end the record on a mournful note with “The greatest.” A gorgeous final trilogy of songs follows the track, cutting its sadness in small ways without contradicting its prognosis: On “Bartender,” Del Rey escapes into a pickup truck and the arms of a drink-slinging man. Barroom sing-along “Happiness Is a Butterfly” amplifies small moments of delight. Fragile but iron-willed, her whispery closing statement “hope is a dangerous thing for a woman like me to have—but I have it” counters depression and ambient malaise with Del Rey’s finely honed femme fatale defiance. “Don’t ask if I’m happy, you know that I’m not,” she scolds the public in general. “But at best you can see I’m not sad.” Maybe, as her beloved America hurtles toward God-knows-what, resisting despair is victory enough. 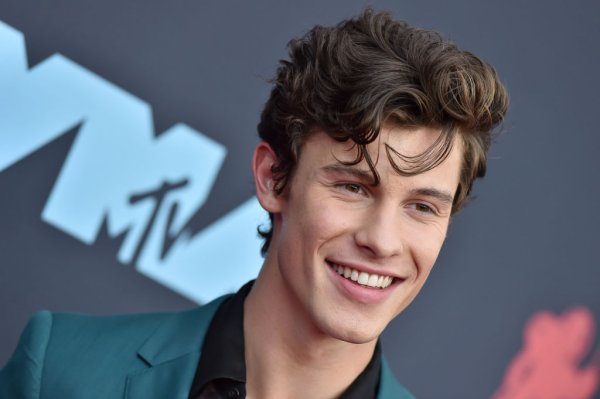 Shawn Mendes Launches His Own Charitable Foundation
Next Up: Editor's Pick