Will Americans Ever Go Meat-Free for Thanksgiving?

Becoming a vegetarian wasn’t that hard for Harper Dutton. The 26-year-old doesn’t really love the taste of meat anyway. So this summer, to help the environment, she quit.

What’s been more difficult is preparing to host Thanksgiving dinner. Weeks before the holiday, Dutton was practicing making stuffing without bacon or lard at her home in an Atlanta suburb. “It is proving to be extremely challenging,” she says.

As evidence grows that eating less meat can help curb the effects of climate change, more and more Americans are preparing meat-free holiday meals for the first time. According to a Nielsen poll taken in December 2018, 61% of Americans are willing to reduce meat consumption to help offset livestock’s environmental impacts. Sales of plant-based meat replacements in the U.S. have grown 31% over the past two years, according to a report by the data-technology company Spins commissioned by plant-based-food interest organizations.

Tofurky, an alt-meat brand famous for its eponymous tofu-based turkey replacement, has barely been able to keep up with the increased demand. In February, the company had to bring in a $7 million private investment to meet production needs for 2019. “We were not ready for what seems to have been the tipping point being met,” says Jaime Athos, the CEO. “Honestly, we didn’t expect it to happen so fast.”

Evolving attitudes toward vegetarianism in the U.S. have contributed greatly to the plant-based industry’s growth, says Adam Shprintzen, author of The Vegetarian Crusade and an assistant professor of history at Marywood University in Scranton, Pa. Though some adopted vegetarianism in the 19th century simply because meat was so expensive, the practice was historically associated with movements like women’s rights, abolitionism and economic justice, casting the choice to avoid meat as a statement.

“Before 1900, generally speaking, vegetarianism is seen as kind of a radical social-reform movement tied to any number of social-reform movements in the U.S.,” Shprintzen says. “Vegetarianism as a movement undergoes a pretty significant transformation in the U.S. kind of neatly at the turn of the 20th century.” As the notion that a meatless diet could improve personal health gained traction, more meat alternatives became available. Being vegetarian no longer meant being stuck with vegetables and rice.

During World War I, it was even seen as patriotic. A 1918 article from the Chicago Daily Tribune, headlined Have You Ever Dined Upon the Mock Turkey, highlighted the alternative meat options of the day, as the Council of National Defense promoted vegetarianism as a means of rationing meat.

But Americans may not be ready to skip meat at Thanksgiving since the holiday and turkey are so intertwined. Alexander Hamilton reportedly once said, “No citizen of the U.S. shall refrain from turkey on Thanksgiving Day,” and every year, the U.S. President marks that tradition by pardoning a turkey on the White House lawn. “It’s part of us, it’s part of our culture, it’s imbued within who we are as Americans,” says Shprintzen.

Indeed, only 5% of Americans say they are full vegetarians, according to Gallup polling data. But Darren Seifer, an analyst at market research firm NPD, predicts more vegetarian options will appear on holiday tables this year, as NPD data shows 18% of adults in the U.S. are trying to eat more plant-based foods. And for vegetarian home chefs like Dutton who are making the effort this year, the tide feels like it’s turning just a bit—as long as her guests like the stuffing. 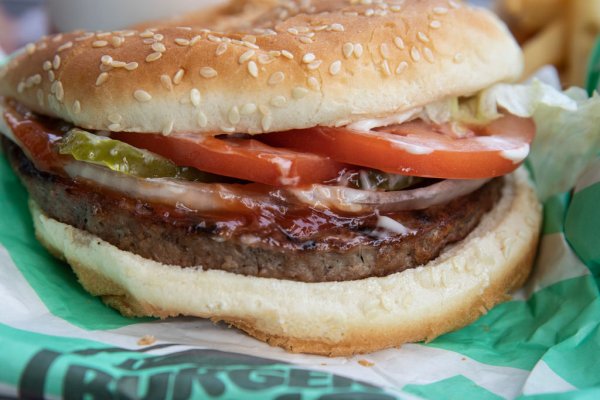